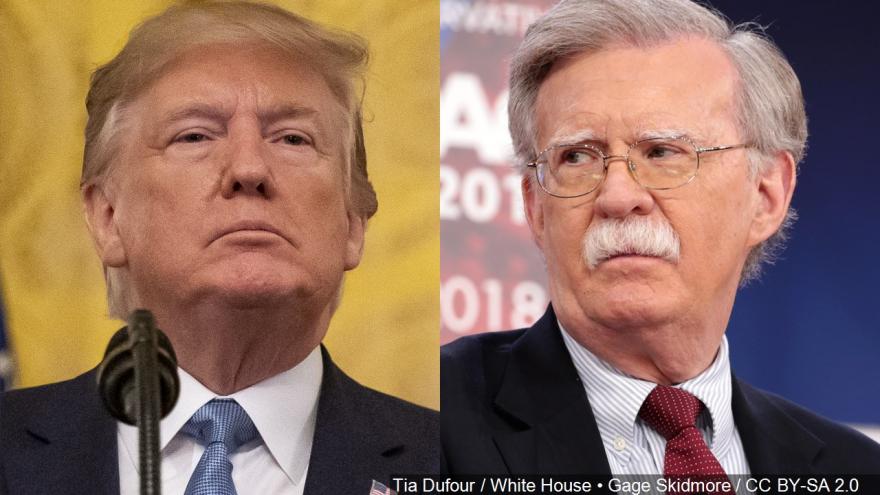 "John Kelly is an honorable man," Bolton tweeted on Thursday. "John and I have disagreed at times, as is commonplace at senior government levels, but he has always served his country faithfully. Conservatives especially have a responsibility to reject baseless attacks upon him."

Bolton's comments continue a trend of the two men joining forces of late against Trump's attacks, despite their rocky relationship when they served together in the West Wing.

The Atlantic reported that, during remarks on Wednesday, Kelly asserted that Lt. Col. Alexander Vindman, a key witness in Trump's impeachment inquiry, had been right to raise concerns about the President's July call with Ukraine's President and that he had told the truth during his testimony.

The comments attracted the ire of Trump, who responded with a pair of tweets disparaging his former chief of staff, a retired Marine Corps general, on Thursday morning.

"When I terminated John Kelly, which I couldn't do fast enough, he knew full well that he was way over his head. Being Chief of Staff just wasn't for him," Trump tweeted. "He came in with a bang, went out with a whimper, but like so many X's, he misses the action & just can't keep his mouth shut,.....which he actually has a military and legal obligation to do."

The President also asserted that Kelly's behavior contradicted an assurance his wife had previously offered.

"His incredible wife, Karen, who I have a lot of respect for, once pulled me aside & said strongly that 'John respects you greatly. When we are no longer here, he will only speak well of you.' Wrong!" Trump added.

The relationship between Bolton and Kelly wasn't always so collegial. In 2018, a heated argument in the West Wing between the two men over a recent surge in migrant border crossings turned into a shouting match, two sources familiar with the argument told CNN at the time.

Bolton reportedly said that then-Homeland Security Secretary Kirstjen Nielsen needed to start doing her job -- which incensed Kelly, a source said at the time. Nielsen had served as Kelly's deputy when he ran the Department of Homeland Security.

Trump, who was angry about the rising levels of migrants and had threatened to shut down the southern border on Twitter earlier that morning, took Bolton's side during the argument.

Since then, Kelly has previously backed Bolton's opinions against the President as well. Kelly said last month that he believes Bolton's allegation that Trump had told the former national security adviser that US security aid to Ukraine was conditioned on an investigation into the President's political rivals, adding that Bolton should be heard from.

"If John Bolton says that in the book, I believe John Bolton," Kelly said in January when asked about the leaked draft manuscript during remarks at the Ringling College Library Association Town Hall lecture series, according to the Herald-Tribune of Sarasota, Florida.