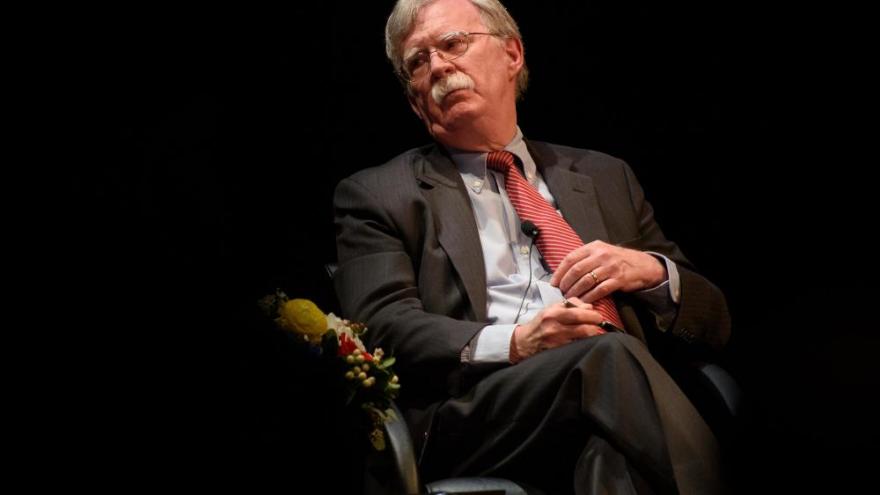 John Bolton is planning to publish his book detailing his time in the West Wing later this month, even if the White House does not give publication approval, people familiar with his thinking told The Washington Post.

(CNN) -- Former Trump national security adviser John Bolton is planning to publish his book detailing his time in the West Wing later this month, even if the White House does not give publication approval, a source familiar with the negotiations told CNN.

"The Room Where It Happened: A White House Memoir" is scheduled to be released on June 23, and, as of now, the White House has not formally signed off on it, the source said. Bolton has already scheduled network interviews to promote the book, a separate source told CNN. A spokesperson for Bolton declined to comment.

The Washington Post was the first to report the details of Bolton's plan. CNN has contacted the book's publisher, Simon & Schuster, for comment.

News of Bolton's plans to move forward follow numerous delays as his lawyers have been embroiled in a battle with the White House over the contents. The Trump administration has raised concerns about the publication of classified information that it says is protected by executive privilege.

Earlier this year, The New York Times reported that Bolton, in his unpublished manuscript, alleged that President Donald Trump directed him to help with his pressure campaign to get damaging information on Democrats from Ukraine.

According to the Times, he also alleged that Trump didn't want to lift a hold on military aid to Ukraine until officials there complied with the request. Bolton's lawyers have not denied the substance of the New York Times reports but have condemned the leaks behind it.

CNN previously reported that Bolton's team has prepared for the possibility that the administration may try to retroactively classify some of the material in his book -- a measure that is uncommon, but not unheard of, due to loopholes in executive order 13526.

"The President is really empowered by the words in this executive authority," said J. William Leonard, the former director of the information security office which overseas executive branch implementation of the executive order -- and former deputy secretary of defense.

"It's an authority that can be abused and it can weaken the classification system," Leonard said. "They abuse it to keep the information out of the hands of adversaries that could potentially use the information to harm the country."