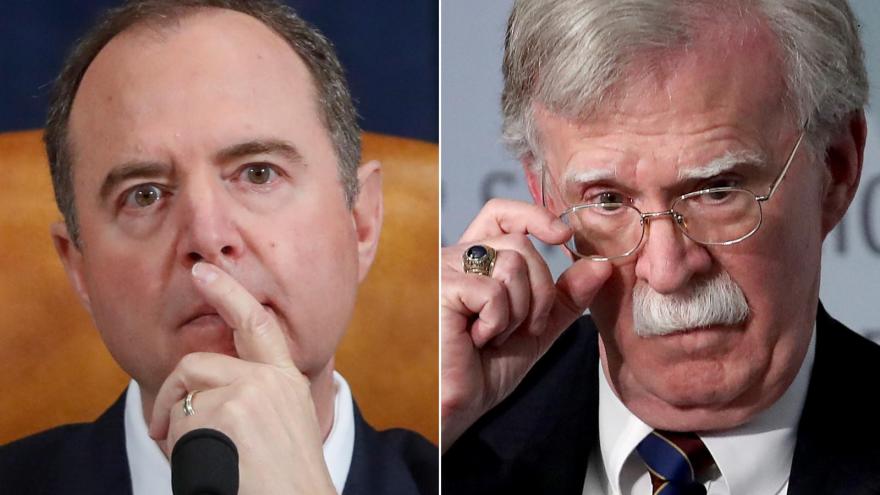 Former national security adviser John Bolton accuses President Donald Trump in his forthcoming book of explicitly tying US security aid to Ukraine with an investigation of his presumptive 2020 opponent, the central allegation of Democrats' impeachment of the President last year.

(CNN) -- Former national security adviser John Bolton accuses President Donald Trump in his forthcoming book of explicitly tying US security aid to Ukraine with an investigation of his presumptive 2020 opponent, the central allegation of Democrats' impeachment of the President last year.

What's more, Bolton charged that Democrats committed "impeachment malpractice" by not broadening their impeachment investigation beyond Ukraine, suggesting that Trump committed similar offenses with China and Turkey, according to a copy of the book obtained by CNN.

But Bolton's book, slated to be released next week, accomplished something impeachment could not: bipartisan agreement to condemn Trump's former national security adviser.

Republicans attacked Bolton's credibility and accused him of settling scores. Democrats said it was too little, too late after Bolton refused to testify during the impeachment inquiry.

"Bolton may be an author, but he's no patriot," tweeted House Intelligence Chairman Adam Schiff, a California Democrat who led the House's impeachment inquiry, adding that Bolton "saved it for a book" instead of testifying.

The congressional reaction to Bolton's book, "The Room Where it Happened," underscores the political reality the Republican hawk now faces after writing a White House tell-all following his 17 months in the Trump White House.

In the book, Bolton writes that in an August meeting, Bolton said he asked Trump about the status of the US security aid to Ukraine. "He said he wasn't in favor of sending them anything until all the Russia-investigation materials related to Clinton and Biden had been turned over," Bolton writes.

The former national security adviser says that Trump also pressed Chinese President Xi Jinping to help with his 2020 bid, writing that Trump "stressed the importance of farmers and increased Chinese purchases of soybeans and wheat in the electoral outcome."

The Trump administration on Tuesday filed suit over the book, accusing Bolton of breach of contract and disclosing classified information, in a ratcheting up of the White House's attacks on the publication.

Bolton was a key figure in many of the major events House investigators unearthed during their impeachment inquiry, and his testimony was sought by Democrats in both the House and Senate.

But Bolton would not testify before the House. His lawyer threatened legal action if Democrats had issued a subpoena, arguing the courts had to decide if he was required to appear. After House Democrats voted to impeach Trump on two counts -- abuse of power and obstruction of Congress -- Bolton said he would be willing to testify during the Senate impeachment trial.

Reports that Bolton's manuscript included allegations Trump had tied the Ukraine aid to Kiev investigating former vice President Joe Biden only fueled Democrats' efforts to call Bolton, but Senate Republicans voted against hearing from Bolton or anyone else, before moving to acquit Trump.

Now those events hotly debated months ago are coming back to the forefront with the release of Bolton's book, and the Trump administration's suit against Bolton's book.

"There's clearly some animus here towards the President. I think that's pretty apparent on both sides," Hawley said. "I just think that there's a lot of desire for publicity here. ... I think you've got to take this with a grain of salt."

But Bolton's allegations were no rallying point for Democrats in Congress, although several congressional Democrats said they planned to investigate the accusations he was making related to China.

House Democrats in particular were aggrieved that Bolton would not appear during their impeachment inquiry, when numerous administration officials defied the Trump administration's demand not to testify after receiving subpoenas.

"It's curious to me that now he has something to say when he could have stepped forward as a patriot when the stakes were high and the President was on trial and he ran and hid in the other direction," said Rep. Hakeem Jeffries of New York, who was a House impeachment manager.

"It is curious to all of us that he wasn't willing to say this stuff to Congress, but he's willing to say it when he can make money," Democratic Sen. Chris Murphy of Connecticut told CNN's Jake Tapper. "I'm not suggesting that what he's saying isn't true. I'm just saying that you do have to question his motives."

In the book, Bolton doesn't answer the question of whether Trump should have been impeached for his conduct regarding Ukraine, though he said Trump's actions with Ukraine were "deeply disturbing" and that he raised the alarm within the Trump administration.

Bolton blames House Democrats for being too fixated on the schedule with the Democratic presidential primary approaching, accusing them of playing "hysterical" games instead of running a serious investigation.

"If Trump deserved impeachment and conviction, the American public deserved a serious and thorough effort to justify the extraordinary punishment of removing an elected president from office," Bolton wrote. "That did not happen."

Bolton argued that even if he had been called to testify by the Senate, he is "convinced" that it would have made "no significant difference" to the outcome.