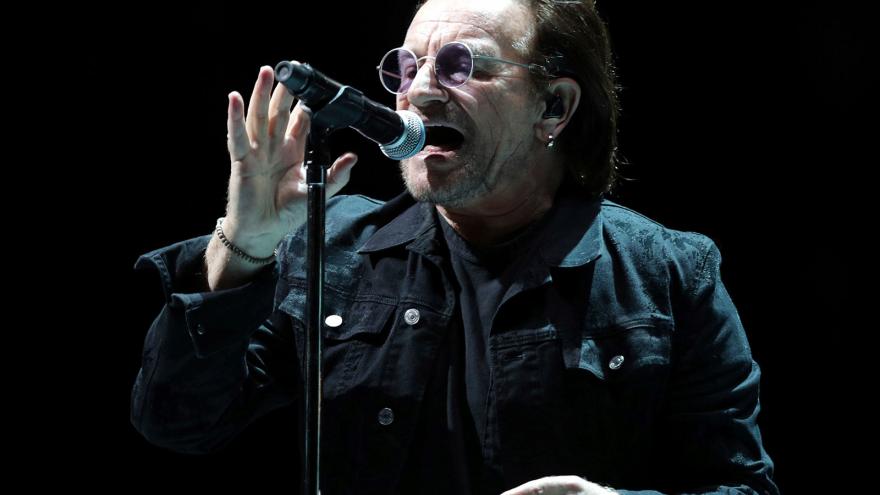 (CNN) -- Millions of fans turned their attention to Bono on Sunday as they helped wish him a happy 60th birthday, but the U2 frontman took the day to thank the 60 artists who made him the musician he is today by releasing a playlist of "60 Songs That Saved My Life."

Bono's playlist, available on Spotify, YouTube Music and other music services, features some classics: "Heartbreak Hotel" by Elvis Presley, "I Want to Hold your Hand" by The Beatles and "Mother" by John Lennon.

But it also has some pop songs you might not expect from a rock star who hails from Ireland, such as such as Billie Eilish's "everything I wanted," Kanye West's "Black Skinhead" and Lady Gaga's "Born This Way."

"These are some of the songs that saved my life," Bono said in a statement. "The ones I couldn't have lived without... the ones that got me from there to here, zero to 60... through all the scrapes, all manner of nuisance, from the serious to the silly... and the joy, mostly joy."

Because the songs mean so much to him, Bono added that he will write a "fan letter to accompany each song to try and explain my fascination."

In his letter to 18-year-old Eilish and her brother, Finneas, who co-wrote the song, Bono wrote, "My ears long for such empty spaces to wander... to sneak away from the density of digital surfaces with too much information... I step inside your song and it's a black beauty, achingly awesomely vulnerable and terrifying."

"When I heard your Dad's song LIFE ON MARS? on the radio in 1973, I was hiding under the covers of my bed in 10 Cedarwood Road listening to a pirate radio station called Radio Caroline," Bono wrote. "The song was answering a much more important question when I was 13... Is there intelligent life on earth? It was proof as far as I'm concerned."

In his letter to Alice Pavarotti, the daughter of the late opera singer, Bono wrote about his memories of working with him on their song "Miserere."

"Miserere is one of my favourite of your father's crescendos," Bono said. "I can hardly remember what it was about... other than forgiveness that is... and a toast to being alive."

More of the 60 fan letters will be posted in the coming week, according to the band's website.

The complete list of Bono's "60 Songs That Saved My Life:"

4. Billie Eilish - "Everything I Wanted"

57. Bruce Springsteen - "There Goes My Miracle"