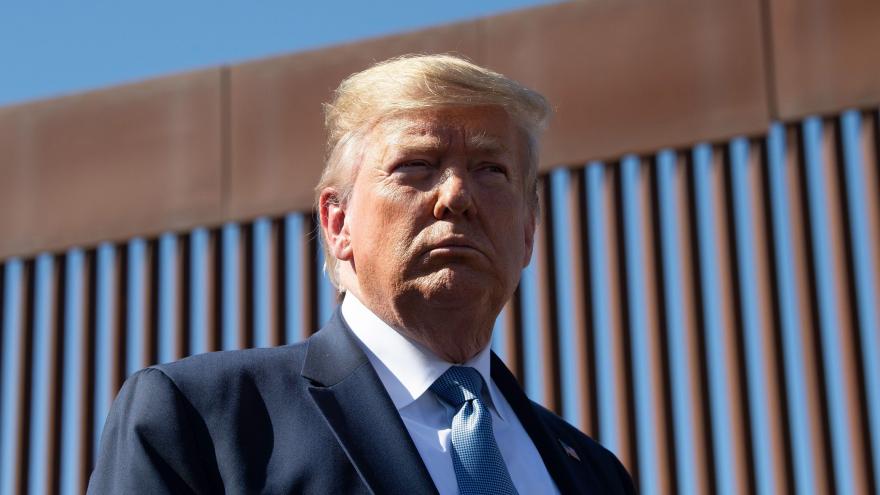 (CNN) -- Smuggling gangs in Mexico have been able to breach new sections of President Donald Trump's border wall in recent months, according to a new report from The Washington Post.

Citing US agents and officials with knowledge of the damage, the Post reported that smugglers have been using reciprocating saws to cut through the steel and concrete portions of the wall, creating openings wide enough for people and drugs to be smuggled through.

The agents told the Post the saws can cut through the bollards in a matter of minutes. Engineers told the newspaper that because of the height of the bollards, which are between 18 to 30 feet tall, it's easier to push the steel out of the way to pass through the other side.

Trump said he hadn't heard reports about cutting through the border wall, but, he added, "you can cut through anything."

"We have a very powerful wall, but no matter how powerful, you can cut through anything, in all fairness," the President told reporters at the White House.

"But we have a lot of people watching," he continued. "Cutting is one thing, but it's easily fixed. One of the reasons we did it the way we did it, it's very easily fixed. You put the chunk back in. But we have a very powerful wall. But you can cut through any wall."

Matthew Leas, a spokesman for Customs and Border Protection, told CNN: "Any characteristic that the wall is not working is ridiculous. The wall is working."

When a breach is detected, a welding crew is sent to fix the opening, the newspaper reported.

Smugglers also attempt to hide a breach in the barrier, by returning the cut in the bollard to its original position or using a putty that looks like the hole has been fixed, so that they can keep using that opening, according to the Post.

But agents told the newspaper that despite fixing and welding the damaged bollards, smugglers still return to the same spot because the metal and the concrete at the bollards' cores have already been weakened.

The Post reported that some of the damage has occurred in parts where electronic sensors that detect sawing vibrations have not yet been installed.

Smugglers also deploy makeshift ladders to climb up and over the barriers in the San Diego area, and then usehooks to hang rope ladders on the other side,according to the Post.

A senior administration official told the Post that the number of breaches amount to "a few instances," but that the new fencing had "significantly increased security and deterrence" along the San Diego and El Centro sections of the border.

Trump's signature campaign promise was building the wall on the US-Mexico and having Mexico pay for it. On a visit to a site in San Diego in September, Trump touted the wall, saying it's "virtually impenetrable."

So far, US taxpayers have been footing the bill for efforts to build new physical barriers at the southern border.