Border Patrol: Group of 1,036 migrants is largest ever found 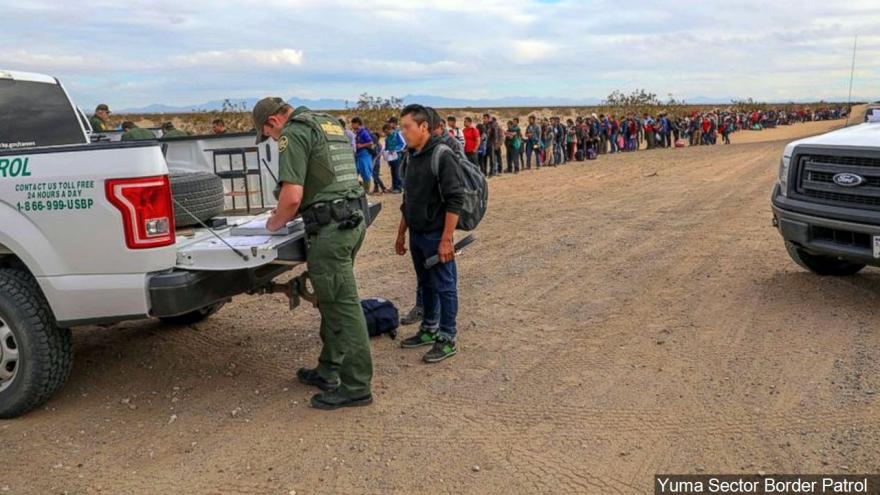 EL PASO, Texas (AP) — A group of 1,036 migrants that crossed the border illegally El Paso, Texas, is the largest the Border Patrol has ever encountered, the agency said Thursday.

The crossing was the latest sign that migrants are increasingly coming in large groups. The Border Patrol said it has found 180 groups of more than 100 people since October, compared to 13 in the previous 12-month period and two the year before.

A Border Patrol surveillance video that President Donald Trump shared on Twitter shows people filing under a chain-link fence to a spot on the U.S. side, where they waited for agents to pick them up. Authorities said it took about five minutes for all to cross around 4 a.m. on Wednesday near downtown El Paso.

The group included 934 people in families, 63 unaccompanied children and 39 single adults, authorities said. The majority were from Guatemala, Honduras and El Salvador.

Large groups began appearing last year in the southwestern corner of New Mexico known as the Bootheel and are increasingly common along the border. U.S. authorities are unsure why but speculate that smugglers may be trying to draw agents from other areas, hoping to create openings.

The Border Patrol has encountered 46 groups of more than 100 people in May alone, authorities said.

Migrant families who claim asylum are typically released in the United States with notices to appear in immigration court.

The U.S. has increasingly been forcing migrants to wait in Mexico while their cases wind through U.S. immigration court, shuttling them back and forth from the border for hearings. The policy has been introduced in El Paso and throughout California.