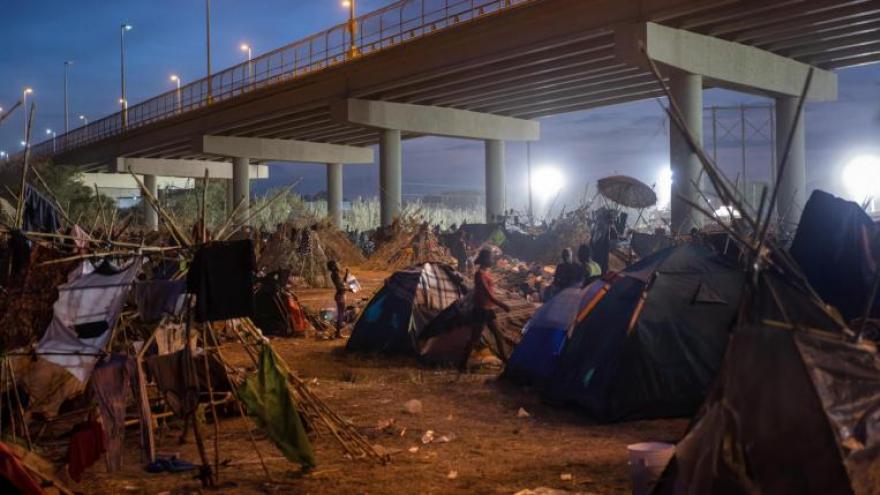 The number of migrants apprehended in Del Rio, Texas pictured here, on September 21 has risen steadily since the start of the fiscal year last October, when fewer than 10,000 migrants were arrested in the region.

(CNN) -- As far back as June, Border Patrol agents in Del Rio, Texas, began asking management for additional resources to more rapidly process migrants, but their calls for increased resources appear to have gone unmet until recent days when thousands and thousands of migrants were forced to wait under a bridge near the US-Mexico border.

Agents on the ground didn't predict the numbers would balloon to more than 14,000 migrants -- many of whom are Haitian -- but they witnessed and grappled with a steady increase in border crossings throughout the year.

Earlier this summer, agents began to see an increase in people crossing the river into the US, at times getting up to several hundred congregating under the bridge, which has now been seen in images and video teeming with people.

The uptick earlier this year prompted the local union, representing Border Patrol agents in Del Rio, to request technology and other resources to process migrants when they are first encountered at the border. Around the same time, the agency started mandating overtime for personnel in the region, a sign that resources were beginning to stretch thin.

On June 1, the union suggested to regional management that it send agents to the field with tablets to start the intake process when a large group crosses the river, instead of having the group wait there while space is cleared in the station, according to Jon Anfinsen, National Border Patrol Council local president in Del Rio, Texas, who shared content of emails back-and-forth with management.

"This way, we can at least get part of the process finished before they even get to the station instead of wasting that time," said the email, which was written to memorialize a meeting earlier that day, according to Anfinsen.

The number of migrants apprehended in Del Rio has risen steadily since the start of the fiscal year last October, when fewer than 10,000 migrants were arrested in the region. That jumped to around 30,700 in June. Similarly, more than 30,000 people were apprehended in Del Rio in both July and August, the most recent months of available data.

No response was received and on June 3, the union sent another email again asking for agents to be sent with tablets whenever the large groups show up to take care of intake at the earliest possible point. The union also suggested putting a trailer or RV in the field to staff it with intelligence agents to help with the work for large groups that arrived.

On June 17, the union received a one-sentence response to the tablet request: "This is being explored, several other platforms are being considered which are more efficient."

It's unclear if additional responses were sent afterward or how management responded to the requests.

The agency did consider the tablets but it never materialized into anything of substance, according to Anfinsen, who was speaking on behalf of the union, not the agency.

A spokesperson for Customs and Border Protection, which oversees US Border Patrol, declined to comment but provided recent remarks from agency and Department of Homeland Security leadership on the situation in Del Rio.

To address the situation in Del Rio, Customs and Border Protection surged 600 agents, officers and DHS volunteer force personnel to the sector "to enhance our operational capabilities," Homeland Security Secretary Alejandro Mayorkas said during a news conference in Del Rio on Monday.

DHS is also securing additional transportation to accelerate the pace and increase the capacity of deportation flights to Haiti and other destinations in the Western Hemisphere, Mayorkas said.

Twelve repatriation flights have left the United States since Sunday, with more expected, and the Biden administration is talking to Brazil and Chile to possibly repatriate Haitians who previously resided in those countries and releasing some Haitian migrants into the US as it scrambles to contain the fallout amid bipartisan criticism.

Customs and Border Protection gave CNN's Rosa Flores an exclusive look Wednesday inside a field hospital that went up just yards from the Del Rio International Bridge where thousands of migrants are still waiting to get processed by US immigration authorities. The hospital became fully functional in the last 24 hours, according to Dr. David Tarantino, a chief medical officer with the agency.

Mayorkas, speaking alongside acting Customs and Border Protection Commissioner Troy Miller and US Border Patrol Chief Raul Ortiz on Monday, warned migrants they would be expelled or deported if they entered the US unlawfully.

"I want to make sure that it is known that this is not the way to come to the United States," Mayorkas said. "Trying to enter the United States illegally is not worth the tragedy, the money or the effort."

Ortiz said the department was working to accelerate and increase the frequency and capacity of flights to remove individuals to Haiti and other countries of origin under the controversial pandemic health order, implemented under the Trump administration, that allows for rapid expulsions.

"We're achieving our goals. We're getting there and getting to a point where we can manage the population here," he said, adding that the population under the bridge was already starting to diminish and would continue to in the coming days.

Anfinsen told CNN that while they hadn't predicted in June that they would be overwhelmed with thousands of migrants under the bridge, they were attuned to the need for more resources to accommodate the increase of migrants arriving in Del Rio.

The migrant groups continued to increase in size and frequency as the months wore on, but the temporary facilities started to come online only recently -- "after things had already spun out of control," he said.

"When we see all year it's increasing, I mean, it's going to get bad," Anfinsen added.

This story has been updated with the latest number of repatriation flights provided by the Department of Homeland Security.