Born in Ukraine, Victoria Spartz using her perch in Congress to push the US to do more 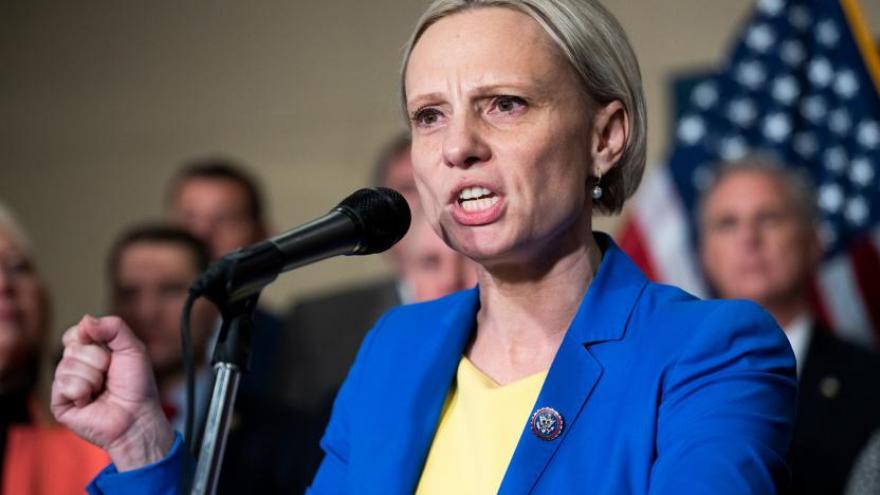 Rep. Victoria Spartz, a Republican from Indiana and a Ukrainian-born American, speaks out against the Russian invasion during a news conference in Rayburn Building on Tuesday.

(CNN) -- When Rep. Victoria Spartz was elected to the House in 2020, she became the first Ukrainian-born member of Congress.

Little did she know that after just one year on the job, that distinction would take on even greater significance as Russia brutally invades her home country and the United States debates what to do about it.

As a freshman, the Indiana Republican is using her microphone in Congress to make passionate pleas for a stronger US response to the rapidly escalating crisis in Ukraine, and hoping her personal connection to the conflict will make the message resonate more strongly. All the while, Spartz is dealing with the emotional toll of watching the bloody invasion unfold, knowing she still has friends and family -- including her grandmother -- who are in Ukraine.

Spartz is calling for stiffer sanctions, immediate aid and more military resources, saying the Ukrainian people want more weapons -- not troops -- because they want to fight the Russians themselves. She also is advocating for refugees and drawing attention to the horrors of the humanitarian crisis that is quickly unfolding.

"This is a slaughter," she said. "It's a murder of the Ukrainian people. ... And the free world is standing and watching. How many he's going to kill? Well, I'll tell you: He's going to kill all of them, and as many as he can if we don't do something about it."

Spartz, 43, has emerged as one of the House GOP's most important and powerful voices on the Russia-Ukraine conflict at a time when the party is attempting to balance its criticism of President Joe Biden's foreign policy moves with a reluctance to undermine the commander in chief amid an international crisis and potentially eviscerate the chances for a strong bipartisan response.

Her colleagues say that Spartz, who immigrated to the United States in 2000 after meeting her husband, an Indiana native, in Europe, is perfectly suited for this moment. Having grown up in the Soviet Union, Spartz brings a unique, firsthand perspective to the current debate that few of her colleagues have, they say.

"She gets it, just like I get it, because we're Americans but we grew up with another perspective," said fellow freshmen Rep. Maria Elvira Salazar, a Florida Republican whose parents fled Cuba. "People that have been here for three, four generations, that have been American all this time, they have forgotten what the other side looks like."

"She is the true voice against socialism ... because she lived it on the skin. I lived it by proxy from my parents," Salazar added.

Spartz has addressed her colleagues twice behind closed doors to talk about the Ukraine crisis: first in February, and then again on Tuesday ahead of Biden's first State of the Union address. The latter speech received a standing ovation, and was described by attendees as "powerful" and "moving."

Spartz, who also attended a bipartisan briefing on Capitol Hill this week with the Ukrainian ambassador and has been in contact with the administration, then spoke publicly at a House GOP news conference, where she called on Biden to act "decisively" to stop Russia's assault on Ukraine or else he is going to have "blood" on his hands.

"This President needs to get his act together and exercise some leadership," she said, flanked by dozens of her Republican colleagues. "I think we'll get together as Republicans and Democrats, but he must act decisively -- fast. Or this blood of many millions of Ukrainians will be on his hands, too."

When asked whether her family and friends are safe in Ukraine, Spartz replied: "No one is safe in that country."

Spartz's grandmother, who is 95, lives in Chernihiv, several hours north of Kyiv, the capital of Ukraine, which is under attack by Russian forces. Spartz has been trying to stay in constant contact with her family and friends in Ukraine, listening to their needs and then relaying them publicly from her perch in Congress.

"My grandma is 95. She experienced Stalin. She experienced Hitler. But she says she never ever experienced anything like this, ever. This is barbaric and brutal," Spartz said at the news conference. "She told my mom ... 'No, don't cry, we are not crying here. We are going to fight. But just give us some guns, so we don't just fight with sticks.' "

House Minority Leader Kevin McCarthy has sought to elevate Spartz, adding her to the procession of lawmakers that will formally enter the chamber for the State of the Union on Tuesday evening.

And in another sign of Spartz's importance to the GOP's response on the issue, McCarthy invoked her name when pressed by reporters on whether Republicans are reluctant to publicly attack Biden over his Russia response.

"I don't think Victoria wants to be quiet when she sees people dying night after night," McCarthy said. "We're going to push the President to do the right thing," he added, with Republicans urging Biden to crack down on Russia's energy sector.

The Russia-Ukraine conflict isn't the only foreign policy area where Spartz's voice has been elevated inside the GOP, thanks in part to her firsthand experience growing up under a socialist regime. McCarthy also tapped Spartz -- a former state senator, accountant and businesswoman -- to be part of his official "Advisory Team on Cuba."

The group was launched to advise leadership about the "ongoing freedom protests and government atrocities in Cuba, develop policies to ensure the United States stands in solidarity with the Cuban freedom movement, and educate the American people on the tyranny of the communist regime in Havana," according to McCarthy's website.

Last summer, Spartz and the rest of the team traveled to south Florida to meet with Cuban American leaders, attend rallies in support of the Cuban people and host roundtables to discuss the Cuban regime's influence in Latin America.

"Socialism always fails," Spartz said at the time. "The United States remains a beacon of hope and freedom for the world, and it is imperative that we stand with the people of Cuba in their fight against tyranny and oppression."

Spartz has acknowledged how her personal experience and background helped shape her politics. Her congressional website says that growing up in Ukraine "molded her conservative political philosophy that limited government is always better, and financial and healthcare decisions should be made by individuals in the free market, not bureaucrats and special interests."

During freshman orientation, Spartz naturally gravitated toward Salazar and GOP Reps. Nicole Malliotakis of New York and Carlos Gimenez of Florida -- all of whom had first- or secondhand experience living in communist or socialist countries. The freshman crew, which dubbed themselves "the Force," talked about linking up to act as a conservative counterweight to the liberal "Squad."

Even before coming to Congress, Spartz was seen as a key recruit for the GOP as it sought to elect more women. And Spartz's district, which spans the Indianapolis suburbs, was viewed as an important battleground for Republicans to hang on to.

"She's amazing. I don't know what to tell you other than you'd have to be dead not to feel the emotion that she expresses," said Rep. Tom Emmer of Minnesota, the head of the House GOP's campaign arm. "This is not about politics at this point. ... If she were on the other side of her politics, I think the reaction would be the same. Extremely powerful."