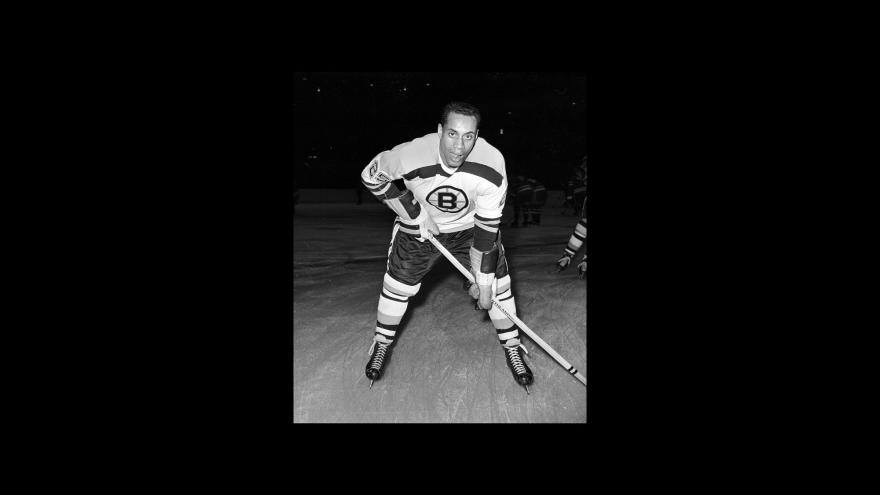 The Boston Bruins are set to retire the jersey of the first Black player in the NHL, Willie O'Ree, seen here at New York's Madison Square Garden on November 23, 1960.

(CNN) -- The Boston Bruins on Tuesday retired the jersey of the first Black player in the NHL, Willie O'Ree.

The Bruins honored O'Ree's legacy by retiring his number 22 before the game Tuesday night -- 64 years after he took the ice for the first time, according to a statement from the team. O'Ree is the 12th player in Bruins history to have their number retired.

O'Ree, 86, played his first NHL game with the Bruins on January 18, 1958, against the Montreal Canadiens, and he went on to play 45 games with the team and 21 years of professional hockey. According to the Bruins, O'Ree hit the 450 milestones for both goals and assists over the course of more than 1,100 professional games.

O'Ree has spent his life giving back to his community and two ice rinks are named for him, one in his hometown of Fredericton, New Brunswick, and the other in Boston. O'Ree has built and supported more than 30 non-profit youth hockey programs throughout North America since he retired, giving more than 130,000 children the opportunity to play hockey, according to the statement.

In addition to the ceremony, landmarks around Boston lit up gold in honor of O'Ree, and every player in Tuesday's game wore a specially designed helmet decal featuring number 22.

O'Ree joined the ceremony virtually from San Diego because of Covid-19.