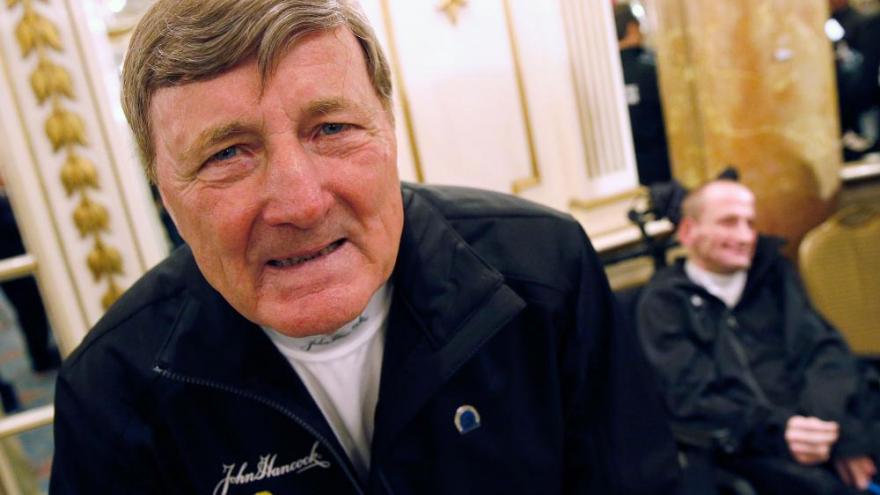 Boston Marathon icon Dick Hoyt died Wednesday morning at age 80, according to his son, Russ Hoyt. He passed peacefully in his sleep due to heart failure, his son said.

(CNN) -- Boston Marathon icon Dick Hoyt died Wednesday morning at age 80, according to his son, Russ Hoyt. He passed peacefully in his sleep due to heart failure, his son said.

Dick Hoyt and his son, Rick, became Boston Marathon legends after their first run in 1980, during which the dad pushed Rick in a custom racing chair, according to the Boston Athletic Association.

The two completed a total of 32 Boston Marathons together, including a final finish in 2014, the association added.

"Dick personified what it meant to a be a Boston Marathoner, showing determination, passion, and love every Patriots' Day for more than three decades," the association said in a statement.

"He was not only a fan favorite who inspired thousands, but also a loyal friend and father who took pride in spending quality time with his son Rick while running from Hopkinton to Boston," it added.

Following news of his passing, tributes poured in from athletes, sports teams, journalists, government leaders and other officials.

Massachusetts Gov. Charlie Baker said Hoyt was "an iconic part of the Boston Marathon for decades."

"Dick epitomized what it means to be Boston Strong and inspired so many along the way," Boston Mayor Marty Walsh wrote on Twitter. "Boston will always miss you. Rest In Peace, my friend."

Team Hoyt has for decades been a "shining example of determination and spirit," the Boston Bruins said in another post.

The verified Twitter account for the Ironman Triathlon wrote they were introduced to the father-son team in 1988 at the Ironman World Championship.

"While they didn't finish that first year further history would be made the very next year," they wrote. "Using an inflatable boat attached to a bungee pulled by Dick, a bike with a seat on the handlebars for Rick, & a custom-made jogger for Rick to sit in, the pair etched Team Hoyt into the history books finishing the 140.6-mile IRONMAN triathlon & redefining what's possible."

Through the duo's participation in not just Ironman events but other competitions as well, more Special Teams are engaged and celebrated in sporting events globally than ever before, the triathlon team said.

"While our hearts are broken for this loss, his accomplishments alongside Rick are ones that will remain at the core of IRONMAN," they said.