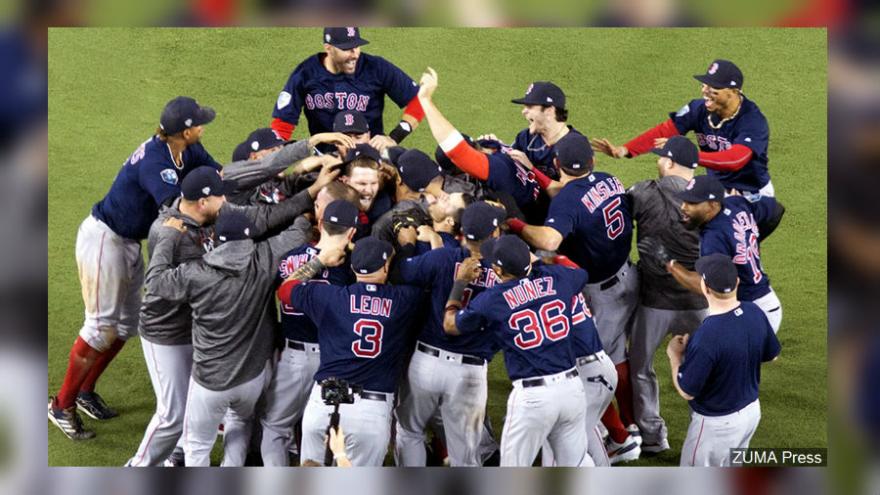 NEW YORK (AP) — Boston should be happy to pay this tax bill.

The World Series champion Red Sox owe $11,951,091 in luxury tax for having baseball's top payroll, according to final calculations by the commissioner's office obtained by The Associated Press. The only other team that owes is the Washington Nationals, who must pay $2,386,097, their second straight year with a bill.

Because Boston was more than $40 million over the tax threshold, it became the first team to incur a new penalty put in place for the 2018 season: the top Red Sox selection in next June's amateur draft will be dropped 10 places. Boston's top pick had been projected to be No. 33 overall before the penalty.

This year's initial tax threshold was $197 million, counting payrolls by average annual values and including earned bonuses, adjustments for cash transactions and option buyouts and just over $14 million per team in benefits. Boston's payroll for the tax was $239.5 million, exceeding the $237 million threshold that triggered the draft penalty. Washington's was $205 million.

Boston boosted its payroll during spring training when it added slugger J.D. Martinez, who counted at $23.75 million on the tax payroll and then earned $700,000 in bonuses while leading the major leagues with 130 RBIs.

Ahead of the July 31 trade deadline, the Red Sox acquired World Series MVP Steve Pearce, who added $3,208,602 to the payroll, including a $50,000 Series MVP bonus; pitcher Nathan Eovaldi, who added $720,430 and became a key component to the title run with a pair of postseason wins and a six-inning relief outing in World Series Game 3 against the Los Angeles Dodgers; and second baseman Ian Kinsler, who added $3,766,666.

San Francisco had the third-highest payroll at $195.7 million followed by the Dodgers at $195 million — up from $182 million on opening day, The Dodgers had paid tax in each of the previous five seasons, a total of $149.6 million.

The Cubs were fifth at $193.3 million, and the Yankees sixth at $192.98 million — the first time the Yankees finished under the threshold after 15 consecutive years over that resulted in taxes totaling $341.1 million.

By dropping under the threshold, the Yankees and Dodgers reset their tax rates for 2019 and put themselves in better position to pursue a talented free-agent class that includes Bryce Harper and Manny Machado.

Boston has owed in nine of 16 seasons, a total of $37.1 million. The Red Sox paid in 2015 and '16, then dropped under the threshold by just over $3 million in 2017, resetting their tax rates to the lowest level this year. Boston paid at a 28.1 percent effective rate.

Washington is paying for the second straight season, raising its total to $3.8 million.

Checks for the competitive balance tax, as it is normally known, go to the commissioner's office and are due by Jan. 21. The first $13 million of tax money is used to fund player benefits and 50 percent of the remainder will be used to fund player Individual Retirement Accounts. The other 50 percent of the remainder will be given to teams not over the tax threshold.

Final figures are still being calculated for regular payrolls, which include salaries, prorated shares of signing bonuses, earned bonuses and adjustments for cash transactions and option buyouts.