Botham Jean's sister admires her little brother's act of forgiveness, but respects those who disagree 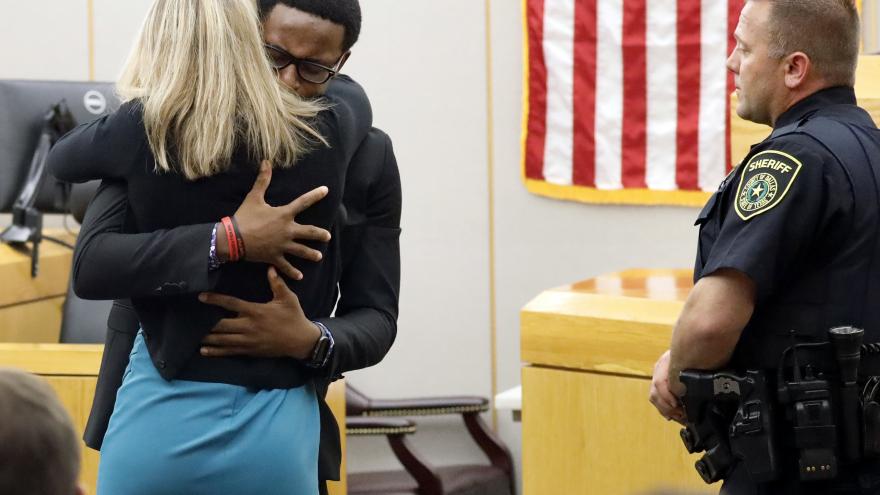 (CNN) -- The older sister of Botham Jean admires her youngest sibling for hugging the former Dallas police officer who killed their brother. But she understands those who disagree with the display of forgiveness.

"What Brandt did, I truly admire," Allisa Charles-Findley said in a statement released through the family's attorney Friday. "I pray every day to get to the point of forgiveness and he is already there."

For many, the hug by 18-year-old Brandt Jean was a touching moment, coming at the end of an emotionally charged trial. Amber Guyger was sentenced to 10 years behind bars this week for fatally shooting Botham Jean in his own apartment. Guyger said she mistook Jean's apartment for her own, and that she believed he was an intruder.

"That's a weight lifted from him," Charles-Findley said. "He hugged our brother's killer to free himself and I stand behind him 100%."

But the hug sparked debate on social media about why black people are often expected to forgive the perpetrators of violence against them. Charles-Findley understands why people would disagree, saying in her statement, "I respect that." But she asked people to be respectful of her brother's decision.

"Not everyone is in the same mental place at the same time," she said, "but do not be disrespectful with your posts and comments on social media, or by word of mouth. Let my brother be free and keep the negativity to yourselves."

The family appeared on the syndicated talk show "Dr. Phil" Friday, when Brandt said he believed the cameras were off when he asked to hug Guyger.

"I don't want to live the rest of my life saying, 'I hate you, I wish I could get you back,'" Brandt said, explaining his reasoning for the hug. "It just clears your mind. It frees me, knowing that it's settled. You pay, yes, for what you did. But in my heart, I know I am free."

Charles-Findley is pleased that prosecutors were able to get a murder conviction in the trial and she's happy that the trial is over, she said in her statement.

"Am I happy with the sentencing? No, but I can live with it," she said. "I cannot imagine the burden placed on these 12 jurors having to decide the fate of an individual."

She thanked everyone who has supported the family since her brother's death.

"Losing Botham has felt like losing a part of myself that I will never get back," she said. "Every day is a struggle."