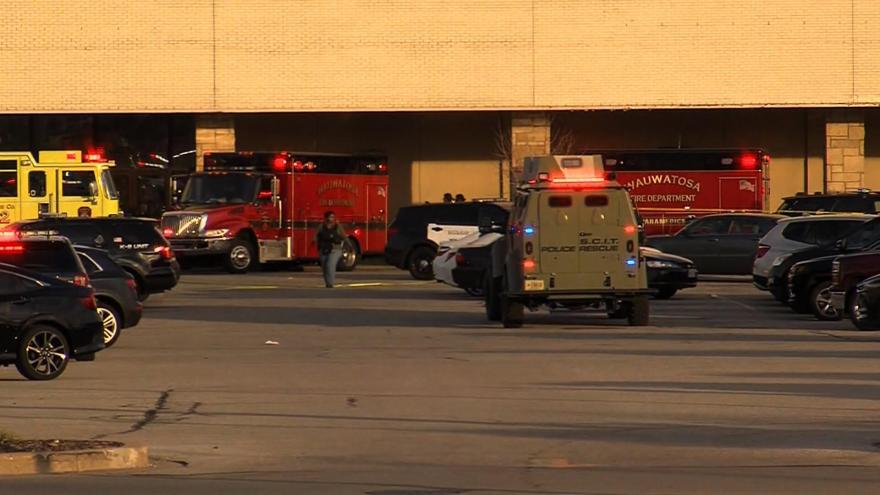 (CNN) -- Police have arrested a 15-year-old Milwaukee boy in connection with a shooting at a suburban mall Friday that left eight people injured.

At a news conference Sunday afternoon, Wauwatosa Police Chief Barry Weber said the shooting at Mayfair Mall was "not random but an altercation between two groups."

Weber gave no further information on the suspect, saying the investigation into the incident was ongoing and that the weapon was recovered at the scene.

Several other arrests have been made, police said.

Of those injured in the shooting, four were innocent bystanders who received non-life threatening injuries and police said most victims were now recovering at home.

The shooter was no longer at Mayfair Mall when Wauwatosa police officers arrived, Weber said Friday. He said the injured were seven adults and one teenager.

A heavy police and EMT presence

The FBI in Milwaukee tweeted that agents were supporting local law enforcement after the shooting.

A heavy police and EMT presence responded, according to footage from CNN affiliate WISN, and police officers in tactical gear were seen entering the mall.

Austin Seybold, 24, said he was locked down in the back room of the Finish Line store inside the mall. Seybold saw customers running past the store. Employees starting rounding up the people inside the store and "took them into the back and locked our front gate," Seybold wrote to CNN via text message from the store.

Seybold said six employees and about a dozen customers were locked in the back room for about two hours before a SWAT team escorted them out.

"It was a little frantic at first, but we managed to get everyone into the back without any hassle and everyone has remained fairly calm which is good, although we can hear what sounds like SWAT teams in the back passageways of the mall and the gravity of the situation is beginning to set in," he wrote.

Mayfair Mall posted on Facebook Friday that it was closed following the shooting.

"We are disheartened and angered that our guests and tenants were subject to this violent incident today. We are thankful for our partners at the Wauwatosa Police Department and we are cooperating with them as their investigation develops," the post read.

Wauwatosa is about seven miles northwest of Milwaukee.

The city was the site of multiple protests in October following news that Officer Joseph Mensah, who shot and killed 17-year-old Alvin Cole outside Mayfair Mall in February, would not face criminal charges.

The decision not to charge Mensah sparked protests during a monthslong wave of nationwide demonstrations over how police treat Black people.