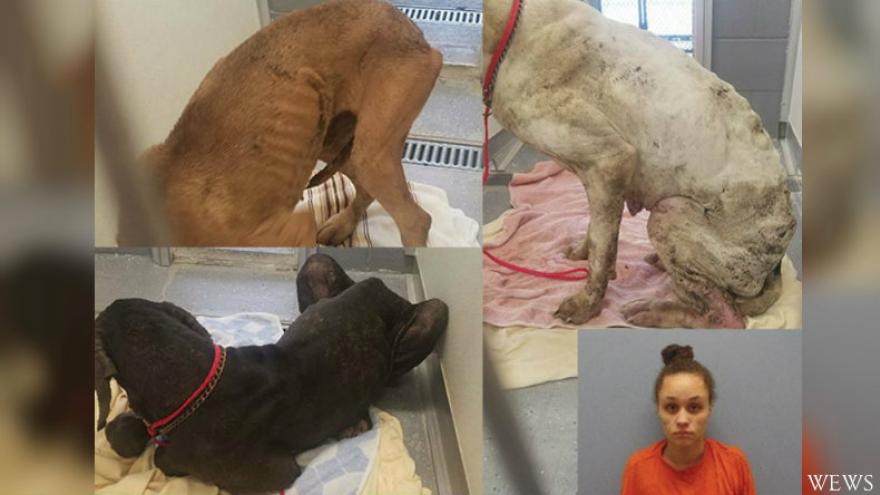 PERKINS TOWNSHIP, Ohio (WEWS) -- A Howard Johnson motel room was covered with so much dog feces and urine, a special crew wearing protective clothing had to be called in to clean and sanitize the room.

It was those conditions Perkins Township police say a mother and her 3-year-old year son were living in for a month.

"There was liquid urine and feces seeping from underneath the door," said Perkins Township Assistant Chief Vince Donald.

Someone called the Erie County dog warden to check on the condition of dogs in the room.

When the warden and police entered the room, they said the walls, floors and bedding were covered in dog feces.

The bathroom had three inches of dog urine and feces on the floor. The boy was also covered in dog feces.

Police contacted Erie County Children Services who had the child checked out at the hospital, then placed with a family member,

The boy's mother, Dezeray Powell, 21, was arrested for animal cruelty and child endangering.

"The child had feces on his feet and clothes,” Donald said.

Powell had been keeping three Great Danes inside the motel rooms small bathroom. The dogs were so malnourished their ribs were showing, authorities said.

Erie County Dog Warden Barb Knapp said the dogs are getting fresh food and water and will be nursed back to health.

The owner of the hotel said Powell would never let him in the room.

"We didn't know what was going on in the room, because she never let me in the room," Raghbir Virk said.

"It was pretty heartbreaking because the child, they don't have a choice. You as an adult make that choice, so that child doesn't have a choice to live in that environment," Donald said.

Powell is scheduled to be arraigned in court April 10.

The Great Danes will eventually be put up for adoption, but that’s months down the road because they have to rehabilitated.