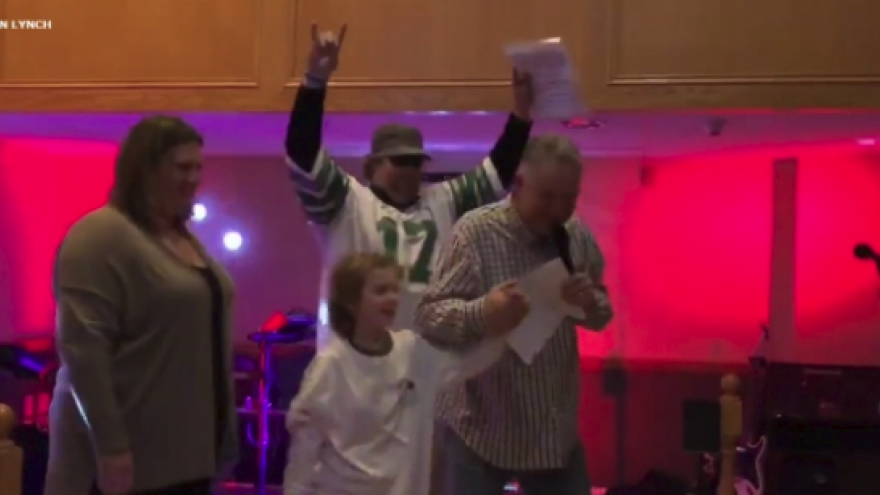 PHILADELPHIA (KYW-TV) -- Going to the Super Bowl is merely just a dream for many of us, including professional athletes.

For a young boy battling cancer in South Jersey, that dream is becoming a reality and he has a community rallying behind him.

During Wildwood’s FreeZa PolloZa — a benefit that supports children with life-threatening illnesses in Wildwood — community members gathered to support 10-year-old Kanen Wear, who had a relapse with cancer and 6-year-old Max Lopez, who suffers Congenital Disorders of Glycosylation or CDG.

John Lynch, who runs FreeZa PolloZa, tells CBS Philly that it was a text message he received that made a child’s dream come true.

“I was told to check my phone for an important text from a very philanthropic member of our community,” Lynch tells CBS Philly.

That man’s name is Sonny DiCrecchio.

“It basically said, ‘John, please inform the Wear family that my wife and I would like to extend an invitation to #Hurricane and his parents to attend Super Bowl LII to cheer on his beloved Eagles as our guests. We will include tickets to the game, airfare, hotel and local transportation to attend the Super Bowl,’” Lynch added.

Kanen, who lives in Cape May Court House, is known locally as “HurriKanen.” He had been cancer-free for the past four years until a recent relapse of Ewing sarcoma.

Running on the “Hurricane” theme, it was only appropriate that Kanen found out in the most unique way.

“We gave his father an envelope that was marked from the National Hurricane Service that basically said, ‘There is a low forming off the coast Wildwood, New Jersey with a 100 percent chance of #HurriKanen hitting the Minneapolis U.S. Bank Stadium on Sunday, Feb. 4, 2018 to watch his beloved Eagles in the Super Bowl,” Lynch recounted.

And that’s when the crowd roared.

“The energy in the room was already at a fevered pitch as there was a positive vibe in the venue that I had never felt in the past 10 years. The excitement of the Eagles and the Super Bowl Buzz was off the chart,” said Lynch.

The Francis Foundation, who is committed to bringing smiles to kids fighting cancer, is also helping Kanen during his trip to the Super Bowl.

Lynch tells CBS Philly that the organization also made a donation to the family to help make Kanen’s Super Bowl dream come true.

“This weekend, for three long days, Kanen will forget the daily grind of chemo, needles, proton machines, hospital stays and all the side effects of fighting his awful disease,” said Lynch.

After a few tears and many smiles, Saturday’s event ended to a chant every Philadelphia fan knows by heart: E-A-G-L-E-S!