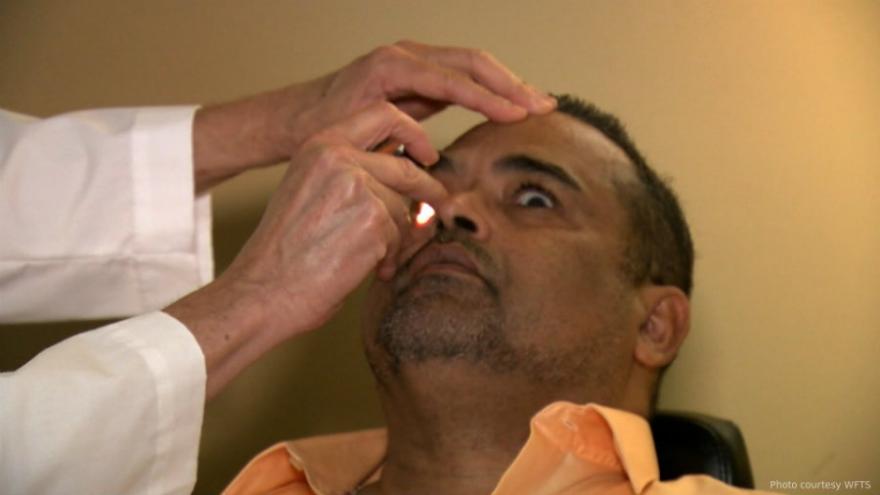 Tampa, FL (WFTS) -- It is like something out of a science-fiction movie — a brain-eating parasitic tapeworm living in your eye. Unfortunately for Sam Cordero, it wasn’t a movie and the race was on to surgically remove it from his eye.

In some extremely rare cases the worm will travel through your intestines, into your bloodstream and embed itself in your brain or eye ball.

Cordero’s parasite set up shop in the vitreous chamber of his eye, that is a fluid filled area behind Cordero’s lens and between his cornea.

“He’s got a window of opportunity where he can end up with 20/20 vision and parasite free,” Dr. Don Perez of the Perez Eye Center said.

Perez said this is the second case he’s diagnosed and treated of the pork tapeworm. He added that there have only been 20 worldwide cases since researchers began tracking the worm.

“What is scary, it gravitates toward the brain,” Perez said.

Perez said they have to remove the parasite before it dies. If it dies in the eye the inflammation could cause Cordero to go blind. If it doesn’t die and releases more larvae the parasite could travel to Cordero’s brain.

“If he was in the brain he would present seizures,” Perez said explaining that the worm eats the brain making tiny holes that make the brain look like Swiss cheese.

“I believe and suspect it came from undercooked pork we ordered around Christmas holidays and that’s how I believe I got it,” Cordero said. “I see a little black dot and it’s only on the left eye. I see something moving from left to right. When the sun comes out it bothers me a lot.”

Cordero said he didn’t know the pork tapeworm existed until he contracted it in his eye. He was worried about the worm going to his brain and dying in his eye, otherwise Cordero was calm about having a parasite living in his eye.

"I know I am in good hands and he treated it before,” Cordero said.

This is the second case Perez has treated.

In 2012, Perez successfully removed another parasite from another patients eye. Although extremely uncommon, Perez said poor hygiene especially in developing countries has lead to an increase in the parasite infecting homes both at home and abroad.

According to Merck Manual, “Taeniasis and cysticercosis occur worldwide. Cysticercosis is prevalent, and neurocysticercosis is a major cause of seizure disorders in Latin America. Cysticercosis is rare in Muslim countries. Infection in the U.S. is most common among immigrants, but North Americans who have not traveled abroad have been infected by ingesting ova from immigrants harboring adult T. solium.”

Perez said proper diagnosis to save a patient’s life is key. Adult tapeworms may reside in the small bowel for years. They reach 2 to 7 mm in length and produce up to 1000 proglottids; each contains about 50,000 eggs.

The worm removed from Cordero’s eye was fertilized and 3mm long.