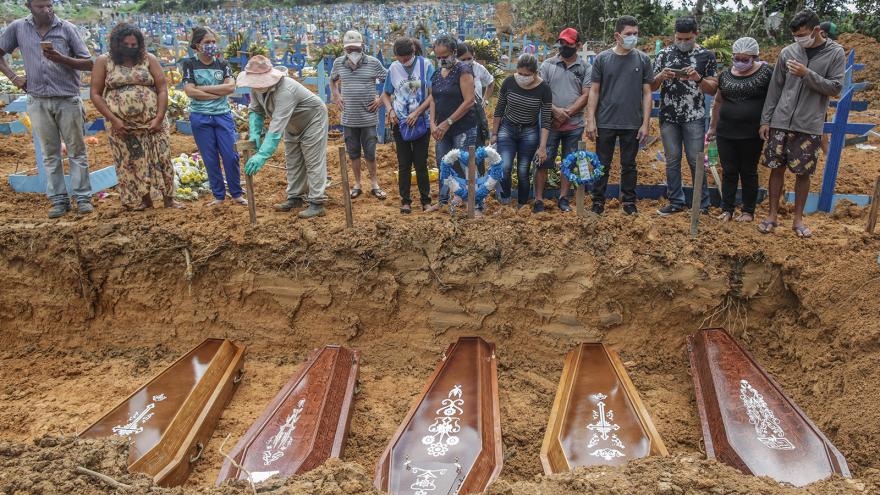 On Monday, the Ministry of Health announced 11,687 new cases of coronavirus had been confirmed over the last 24 hours, bringing its total number of cases to over 374,800. More than 23,400 Brazilians have died so far.

The increase follows a grim milestone over the weekend: On Saturday, Brazil overtook Russia to become the country with the most confirmed cases of Covid-19 after the United States, according to Johns Hopkins University figures.

That was the night that Bolsonaro and his security team left Brasilia's presidential palace and made an impromptu stop at a hot dog stand. While local media captured the president eating his snack, people could be heard yelling "killer" and "trash" and banging pots and pans from their windows. The President at one point turned and wagged his finger at the crowd.

While the country's number of confirmed cases and death rate soar, Bolsonaro has referred to the virus as a "little flu" and frequently downplayed its risks. Two health ministers have left his cabinet in the past few weeks -- one was fired and the other resigned -- after disagreements over how to handle the pandemic.

Bolsonaro has repeatedly expressed concern about the financial impact of the virus, warning it will be worse than the virus itself. He has been outspoken against preventive measures, like lockdowns and quarantines, imposed by governors and mayors of some of the most impacted places in Brazil.

His supporters seem to agree. On Sunday, crowds gathered outside Planalto Presidential Palace in Brasilia waving banners and flags in support of Bolsonaro and protesting the lockdown measures. The rallies have been happening nearly every weekend and are usually broadcast live on Bolsonaro's personal Facebook account.

In video footage of the latest rally, Bolsonaro could be seen with and without a mask as he greeted excited supporters cheering behind a barrier. At one point, a young girl slipped past the barrier and hugged him, while he wasn't wearing a mask.

National Security Adviser Gen. Augusto Heleno, who was with Bolsonaro at the event, could be heard saying, "We will win this war."

"This is a calculated risk and everything will work out," he added.

However, Bolsonaro's critics have slammed the government for how things are working out. During an interview with CNN Sunday, Manaus Mayor Arthur Virgilio Neto said the president was "co-responsible" for the country's coronavirus deaths and called fo the president's resignation.

Manaus, a city of 2 million known as the gateway to the Amazon, has been devastated by the virus More than 13,000 cases and 1,182 deaths have been registered in Manaus. On Saturday alone, there were 51 burials.

Virgilio Neto's attack was not unprovoked -- in a video of an April cabinet meeting released last week by the country's Supreme Court as part of an unrelated probe, Bolsonaro was revealed calling the Manaus mayor a "piece of shit," referencing the city's mass graves.

The explosion of cases in Brazil is part of a new rise across Latin America that worries health experts. Peru, Chile and Mexico have also seen steep rises in new cases over the past week.

"We don't have the situation under control and particularly in many of the poorer areas of the world, it's really spiraling upward," Dr. Keiji Fukuda, former World Health Organization assistant director-general for health security told CNN's Alisyn Camerota on Friday.

And while Brazil's so-called "Trump of the Tropics" has been accused of failing to take Covid-19 seriously enough, his counterpart in the United States is starting to signal concern.

On Sunday, US President Donald Trump -- a vocal ally of Bolsonaro who has also faced criticism for his handling of the pandemic -- suspended entry for foreign nationals who have been in Brazil within 14 days immediately preceding their attempt to enter the United States.