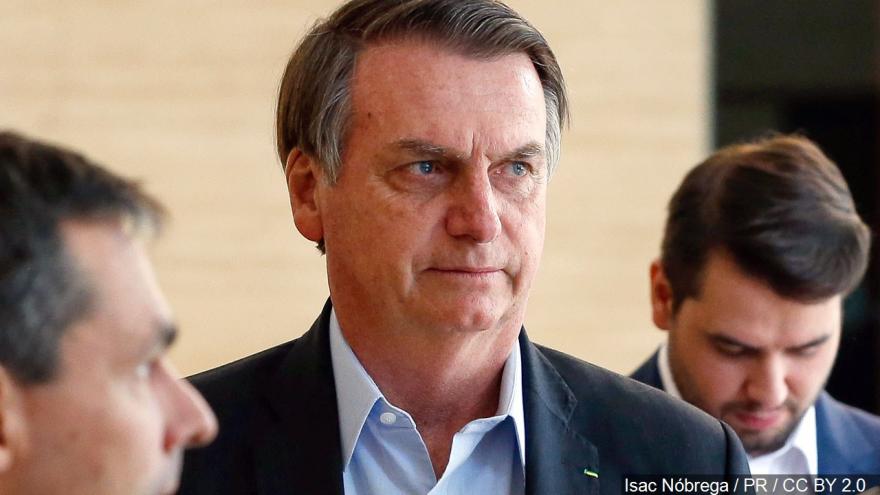 Trump initially leveled the threat by Twitter while accusing Brazil and neighboring Argentina, governed by U.S. allies Bolsonaro and Mauricio Macri, of manipulating their currencies and hurting American farmers.

Brazil's vice president denied the accusation, but Bolsonaro, who openly admires Trump, was reticent; the far-right politician said he could call Trump "if needed."

Both South American nations were among a group of U.S. allies that Trump exempted from steel and aluminum tariffs in March 2018. The American president's threat to reverse that decision and impose the metals tariffs on Argentina and Brazil is another example of his mercurial approach to trade policy.

He also called on America's central bank to act to prevent other countries from devaluing their currencies.

"Brazil has really discounted. If you take a look at what's happened with their currency, they've devalued their currency very substantially by 10 percent. Argentina also," Trump said shortly before departing for a NATO conference in London. He did not provide specifics on the tariffs.

The stakes are high for Bolsonaro, who has made his relationship with Trump a cornerstone of his diplomacy and is called by both friends and foes "the Trump of the tropics."

While feuding publicly with other Western leaders, including the presidents of Germany and France, Bolsonaro has made several concessions to Trump in the expectation of reaping benefits. He has exempted American tourists from visas to visit Brazil, allowed the U.S. to launch satellites from Brazil and made it easier for Brazilians to buy American wheat and ethanol.

In exchange, he received tepid U.S. support for Brazil's bid to enter the Organization for Economic Cooperation and Development, while Argentina has received full endorsement for membership.

"Brazil's president thought he had a big brother. Now he realizes he does not," said Carlos Melo, a political science professor at the Insper University in Sao Paulo. "His supporters might have to say that Trump was under pressure and there will be compensation later. But clearly this affects Bolsonaro. It is clear that international politics are about economic interests, not friendship."

Brazil is grappling with stubborn double-digit unemployment, and its economy is headed toward its third straight year of roughly 1% growth, following two years of deep recession.

Rubens Barbosa, a former Brazilian ambassador to Washington, told The Associated Press that Trump is "punishing Brazil's government and companies without a specific cause."

"This is an unfair relationship. Brazil is making gesture after gesture to support the U.S. in international forums, but the U.S. is not doing the same," Barbosa said.

Speaking at a business forum shortly after Trump's comments, Vice President Hamilton Mourão denied the country was manipulating its currency. He also said Brazil should discuss investment projects with China — a relationship initially shunned by the Bolsonaro administration that has lately grown warmer.

Brazil's economy, foreign affairs and agriculture ministries said in a joint statement they will "defend Brazil's trade interests and assure the flow of trade with the U.S."

Argentina, for its part, is mired in an economic crisis with rampant inflation, deep indebtedness, widespread poverty and a currency that has plunged under the leadership of Macri, who came to power in 2015 with promises to boost South America's second-largest economy. Macri was defeated in elections in October and will leave office next week. Argentina's President-elect Alberto Fernández will be inaugurated on Dec. 10.

"This was an unexpected topic, there was no signal toward our government, nor toward that of Brazil, nor the private sector, with respect to the changes," Argentina's Sica told reporters in Buenos Aires.

Both South American countries have benefited from the U.S. trade war with China, taking advantage of Chinese import taxes on U.S. farm products to export more agricultural goods to China.

Barbosa suggested Trump's failure to respond to Bolsonaro's attempts to improve ties could affect Brazil's decision on whether to buy 5G wireless technology from China's Huawei.

Trump has lobbied allies to avoid Huawei over worries its equipment might help Chinese electronic spying. The company denies that claim.

Trump's trade war with China hurt U.S. farmers after Beijing retaliated against levies on hundreds of billions of dollars of Chinese-made goods.

Businesses in the U.S. have delayed investments, sapping economic growth, because they don't know if the agreements Trump reaches with other countries will last or what countries or products he will target next.

After a brief spike in steel prices, U.S. steel producers have struggled since the Trump administration put tariffs into place last year. Domestic demand has slumped along with the energy sector as drillers pull back on purchases of steel pipe.