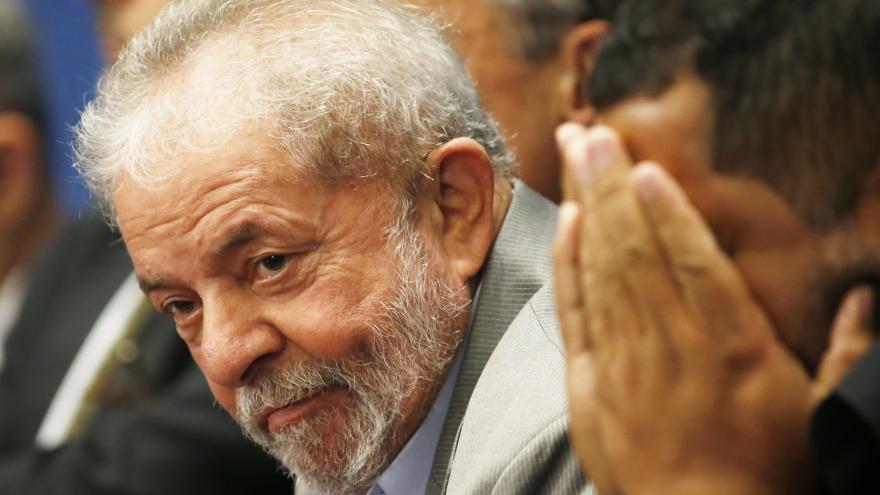 "I believe in justice and know I am not above the law," Lula da Silva, 72, said from a stage outside the steelworkers' union headquarters. "I will prove my innocence."

It is not clear when the former President will surrender to authorities.

Lula da Silva, a former steelworker union leader, remained at the union headquarters Friday, defying an order to turn himself in to police by 5 p.m. local time in the southern city of Curitiba.

The union building is in the city of Sao Bernardo do Campo in Sao Paulo state, more 260 miles to the north.

Speaking to supporters from a memorial for his late wife, Marisa Leticia Lula da Silva, Lula da Silva said his arrest is politically motivated and that "history will prove" that he is not guilty.

"I will turn myself into the authorities willingly," Lula da Silva said. "If the crime I'm guilty of is bringing food and education to the poor, then I hope I'll continue to be the biggest criminal in this country."

On Thursday, a federal judge ordered Lula da Silva's arrest after the Supreme Court ruled he must start serving the 12-year sentence.

Lula da Silva, who governed Brazil from 2003 to 2011, had been considered a front-runner in elections in October. But the court's decision not to grant his request to remain free while appealing the conviction has cast doubt on his bid to regain power.

"Their dream is for me not to run, their other dream is to see my picture in prison," Lula da Silva said Saturday. "The more days I spend in jail, the more 'Lulas' will emerge in this country."

In January, an appeals court unanimously upheld the corruption and money laundering charges against him, and he was handed the prison sentence. Lula da Silva was initially found guilty of the charges in July.

Lula da Silva has strongly denied any wrongdoing. His defense said he was a victim of political persecution.

His conviction stemmed from a wide-ranging corruption investigation into the state-run oil company Petrobras, dubbed "Operation Car Wash." The accusations against him emerged after he left office in 2011.

Lula da Silva was accused of benefiting from the renovation of a triplex in a beach town near Sao Paulo by the construction company OAS. The charges were connected to 3.7 million reais' worth of bribes ($1.1 million) received from OAS through the beachfront apartment. In return, Lula da Silva helped the builder acquire contracts from the oil company, prosecutors charged.

He won two terms as president. He was friends with the late Cuban leader Fidel Castro, who supported his political career, and attended Castro's funeral.

Lula da Silva left office with a 90% approval rating but was questioned by police about the corruption allegations in March 2016.

Lula da Silva's wife, Marisa Leticia Lula da Silva, and six others also were charged. She died in February 2017. She would have turned 68 on Saturday.