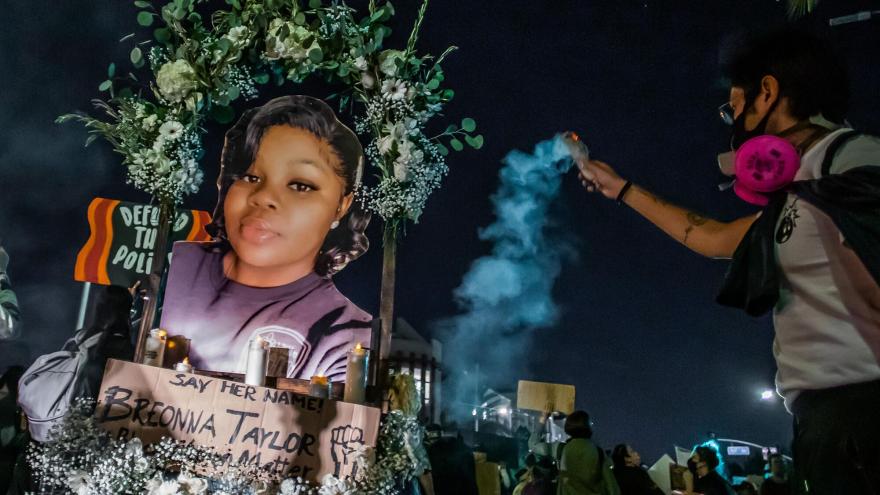 Protesters march against police brutality in Los Angeles, on September 23, 2020, following a decision on the Breonna Taylor case in Louisville, Kentucky.

(CNN) -- A grand juror in the Breonna Taylor case has suggested the Kentucky attorney general may have misrepresented to the public the case presented to the panel, a lawyer for the juror said Tuesday.

"My client wants to make sure the truth gets out," Kevin Glogower, the attorney for an anonymous grand juror, told reporters.

"This is an issue that is about accountability, it is about public trust and it is about transparency," he added.

The grand juror has requested in court that any and all recordings, transcripts, and reports of the grand jury relating to the case be released to the public, a move a former Kentucky prosecutor called "totally surprising and tremendously uncommon."

Glogower said Tuesday his client's position is, "What was presented [to jurors] is not being publicly disclosed."

Kentucky Attorney General Daniel Cameron on Monday night said he only recommended charges of wanton endangerment to the grand jury, which did not charge any of the officers with killing Taylor.

Cameron, in a statement, said prosecutors presented all evidence, even though the facts showed use of force by two officers not charged was "justified" because they were fired upon.

"For that reason, the only charge recommended was wanton endangerment," Cameron said.

In addition to the release of recordings and transcripts, the juror, according to court documents obtained by CNN, also asked the court to "make a binding declaration" that the grand juror has the right to disclose information. It asked for details about the process and details of the proceedings, particularly, the motion stated, to avoid fears that Cameron would attempt to use the court's powers of contempt in the case of a public disclosure.

Cameron initially refused to release grand jury transcripts related to the Taylor case despite growing public calls to do so by the Louisville mayor, the Kentucky governor, and Taylor's family's attorneys.

But Cameron on Monday evening announced he would comply with a judge's ruling ordering a recording of the grand jury presentation be added to the court's case file.

Cameron had previously said releasing the presentation would interfere with other investigations. He reiterated that Monday, saying, "We stand by our belief that such a release could compromise the ongoing federal investigation and could have unintended consequences such as poisoning the jury pool."

"The Grand Jury is meant to be a secretive body," Cameron said in the statement emailed from his office to CNN.

"It's apparent that the public interest in this case isn't going to allow that to happen. As the special prosecutor, our team has an ethical obligation not to release the recording from the Grand Jury proceedings, and we stand by our belief that such a release could compromise the ongoing federal investigation and could have unintended consequences such as poisoning the jury pool."

"Despite these concerns, we will comply with the Judge's order to release the recording on Wednesday," Cameron said.

Cameron's statement came after Judge Ann Bailey Smith said the recording and all discovery documents cannot be shared simply between the parties. Smith oversaw the arraignment of former Louisville police Det. Brett Hankison on three counts of first-degree wanton endangerment in connection with the incident that led to Taylor's death.

Taylor had five penetrating gunshot wounds and a projectile in her right heel, according to an autopsy report released Tuesday by the Jefferson County Medical Examiner's office.

She had gunshot wounds to her torso, forearm, thigh and foot, according to the report, which cited the cause of death as multiple gunshot wounds. A blood sample tested negative for alcohol and drug use, the report said.

Cameron said last week that the single, fatal shot was not fired by Hankison.

Taylor's family and others have called for the grand jury transcript to be released.

No officer who took part in the March 13 raid was charged for Taylor's actual killing. A grand jury instead leveled three counts of felony wanton endangerment against Hankison, Cameron said last week.

The counts pertain to Hankison allegedly firing blindly through a door and window, with bullets entering an adjacent apartment where a pregnant woman, a man and a child were home, according to the state attorney general.

Hankison pleaded not guilty to the charges on Monday.

The FBI announced in May it was investigating the circumstances surrounding Taylor's death and said last week that work continued "beyond the state charges announced." The agency has previously said it is taking a "fresh look" at all the evidence and interviewing witnesses as well as examining all the evidence.