Breonna Taylor, John Lewis and Rosa Parks are among the people Americans have nominated for Trump's garden of American heroes 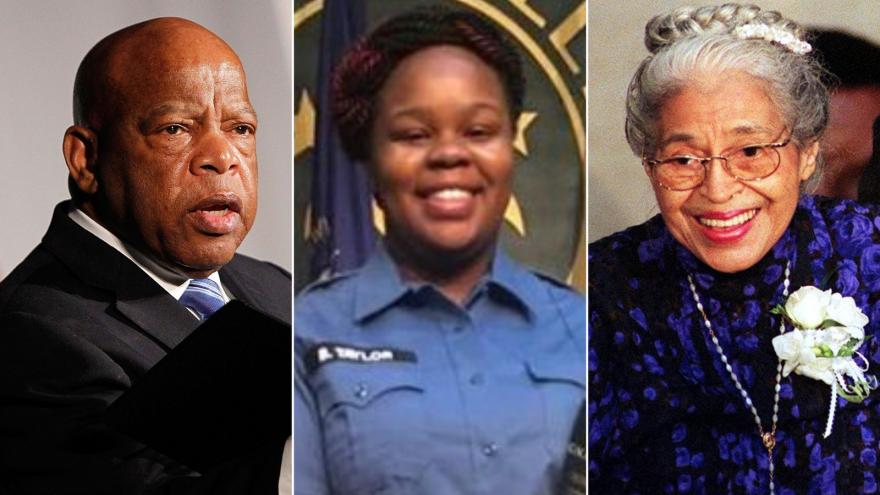 (CNN) -- Civil rights activists, athletes and musicians are among the people Americans' have suggested be featured in President Donald Trump's proposed National Garden of American Heroes.

The nominations, which were made public this week, follow an executive order issued July 3 in which the President called for a park to feature statutes of historically significant Americans.

The order designated a task force to identify potential locations for the park, determine whether states or counties had statues to donate and provide recommends of American heroes who should be featured. The committee sent out more than 2,000 letters to state governors and county officials for recommendations, according to the the Department of the Interior. While every state was invited to give input, some declined to participate including California, Louisiana, and New Mexico.

The department has been collecting the proposals and is expected to report the findings to Trump on Tuesday, according to the order.

"Most recently, we can acknowledge that George Floyd, Breanna Taylor, Trayvon Martin and others, have shaped the future of America by finally bringing the systemic racial injustices present in our policing to the forefront of politics," Amy Zanelli, Lehigh County Commissioner, wrote in a letter to the task force.

"We are making great advancements, and it would be prudent to remember them as historically significant Americans."

Sacagewea, a Native American teenager who helped lead explorers Meriwether Lewis and William Clark westward in the 1800s, was nominated by both North Dakota and Montana

Indiana nominated Madam C.J. Walker who founded a cosmetics and hair care line focusing on Black women. The success of the line led Walker to become the first female self-made millionaire in America, according to the Guinness Book of World Records.

Other nominations include Olympian Gretchen Fraser, who was the first American to win gold in skiing, legendary basketball player and coach, John Robert Wooden, along with Johnny Cash, one of the best selling music artists of all time. The recommendation letters can be viewed on the Department of the Interior's website.

"The Task Force has received hundreds of recommendations for American heroes by a bipartisan group of governors and locally elected officials, in addition to the general public," the agency said in a statement submitted to CNN on Monday. "The robust responses and enthusiasm to highlight hometown, American heroes has been overwhelming."

The executive order states the National Garden should be opened for the public prior to the 250th anniversary of the proclamation of the Declaration of Independence on July 4, 2026.