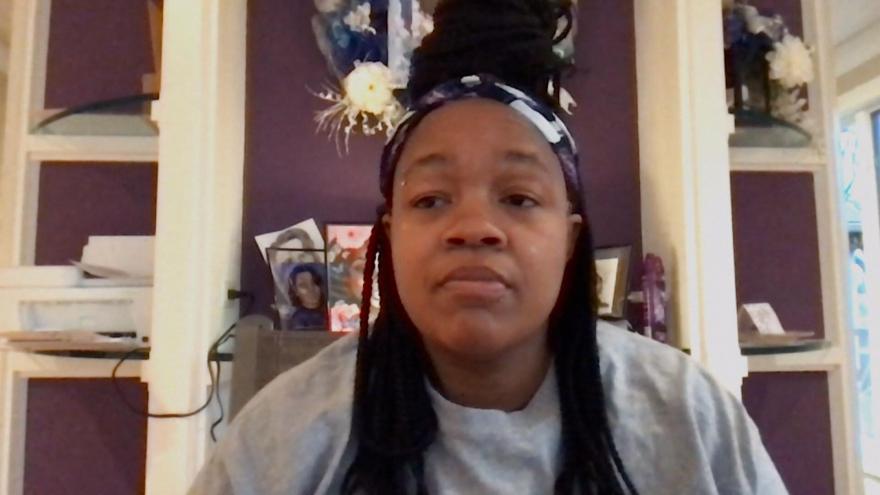 Nearly one year after the death of Breonna Taylor, the anniversary of which is March 13, the family and attorney said, "there's still not been justice for Breonna."

(CNN) -- Nearly one year after the death of Breonna Taylor, the anniversary of which is Saturday, the family and attorney said, "there's still not been justice for Breonna."

Tamika Palmer, Taylor's mother, told CNN's Alisyn Camerota on New Day that justice for her daughter would mean the "officers arrested, and charged, and convicted."

Lonita Baker, the family attorney, said the family will continue to feel there has been no justice "until the officers who are responsible for Breonna's death are criminally charged as they should be."

Taylor, a 26-year-old emergency room technician, was shot and killed by Louisville police officers in her apartment during a flawed forced-entry raid in the early morning hours of March 13 last year.

"A grand jury has never heard charges as it relates to the killing of Breonna Taylor," Baker told Camerota.

"A grand jury...did not decline to charge the officers," in Taylor's death, she said, adding "instead it was [Attorney General] Daniel Cameron's office who decided not to present charges on behalf of Breonna to a grand jury."

"And that's primarily what the family and community is asking for at this time -- to let the criminal justice system play its course," to let a grand jury determine accountability and ultimately not to leave that "decision making" in the hands of the prosecutor.

A grand jury indicted a former detective on three charges of first-degree wanton endangerment for allegedly firing blindly into the apartment and endangering neighbors. Two other officers who shot at Taylor, were not indicted.

Kentucky Attorney General Daniel Cameron previously disclosed he only recommended charges of wanton endangerment to the grand jury, which did not charge any of the officers in Taylor's death. Cameron said prosecutors presented all the evidence, even though the facts showed use of force by two officers not charged was "justified" because they were fired upon. He had suggested the grand jury in the Taylor case could have made an "assessment about different charges."

Baker said it's still very possible for "these officers and their charges to be presented to a grand jury."

"We've always maintained if this was a decision of the grand jury, we may not be happy with it, but we could accept that it was at least presented the way everyone else's charges are presented."

She notes there is an ongoing federal investigation and "we look forward to that wrapping up" and "for the appropriate charges to come out of that."

There is no timeline on that investigation, she said.

Despite several police reforms since her death, including the banning of no-knock warrants in Kentucky, a search warrant approval overhaul, and the beefing up of community policing, Palmer says that's still not justice. "They don't help Breonna," she explained "but the goal is for there not to be another Breonna so you know their steps moving forward to make sure, hopefully, ensure this won't happen again."

Baker also said a settlement of $12 million from the Louisville police department received by the family, while holding the City and Police force accountable, "does not hold the officers responsible for Breonna's murder accountable."

On how she feels, "definitely anger, just anger that the way this whole thing happened, anger that it was so avoidable, and anger that she lost her life for it."

Justice for Taylor would mean the "officers arrested and charged and convicted. That's it," she said.

She said the Louisville Police have never told her why this happened, and she hasn't had communication with them.

"It's insane, its disrespectful," she said of the lack of communication.

"At this point I don't really know what they could say, like you've avoided me for a year, and I don't know what it would do at this point."

The family has planned a rally Saturday to continue a call for justice, Baker said.

To the protesters that give her strength, Palmer said, "thank you."

"I'm grateful that the work hasn't went unnoticed," she said, but she urges them "to not lose focus, not give up, because we still haven't got what we came for...justice."

"Until that happens I just, I hope they continue to have the strength and the courage to be out in the streets," she said.