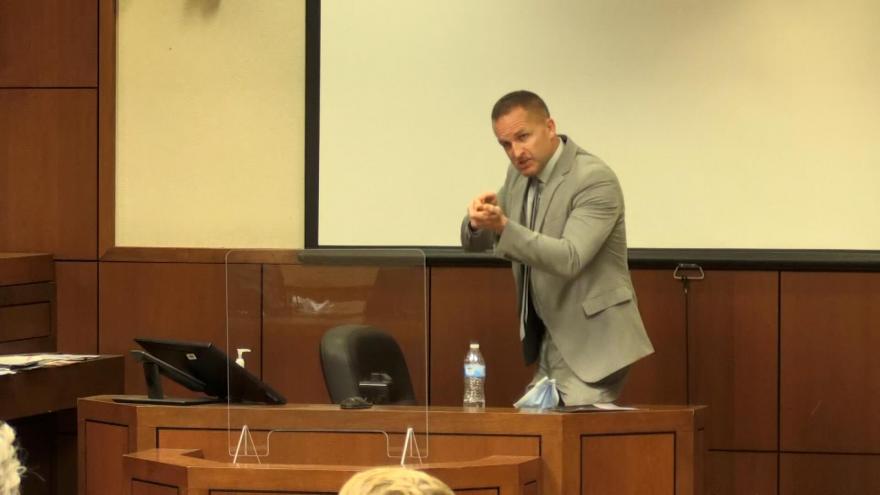 In court, former Louisville Metro Police detective Brett Hankison showed the jury what he said was the positioning of a gunman inside Breonna Taylor's apartment on March 13, 2020.

A jury has acquitted Brett Hankison of all three counts of felony wanton endangerment in the botched raid that left Breonna Taylor dead.

A jury began deliberating Thursday in the trial of a former Louisville police detective for his role in the fatal 2020 raid on Breonna Taylor's apartment -- after the prosecution and defense offered widely different takes on his decision to fire into the building.

Brett Hankison illegally disregarded the risks of harming neighbors when he "shot wildly in the wrong direction" through Taylor's apartment and into a neighboring occupied unit, Assistant Attorney General Barbara Whaley told jurors Thursday in her closing argument.

"His wanton conduct could have multiplied one tragic death, (that of) Breonna Taylor ... by three, easily," Whaley said.

Defense lawyer Stewart Mathews told jurors in his closing argument that Hankison acted because he saw a fellow officer get shot, and that his actions were justified.

"I would submit that a reasonable person would do exactly what Brett Hankison (did), if he sees (a) brother officer being shot," Mathews said during closing arguments in Jefferson County Circuit Court in Louisville. "He did what he had to do that day."

Hankison, 45, is charged with three counts of wanton endangerment as prosecutors say he fired 10 shots blindly into Taylor's home during the raid, endangering a man, a pregnant woman and her 5-year-old son next door. Hankison's attorneys have argued he acted to defend his fellow officers -- one of whom was shot -- in a chaotic situation.

The charges stem from the botched raid in which police fatally shot Taylor, a Black 26-year-old emergency medical technician, in her own home in the middle of the night. Hankison's charges are not for Taylor's death, and he was the only officer charged in connection with the incident.

"(Hankison's) actions were not criminal, and he does not deserve to be sent to prison," Mathews said Thursday.

Combined with the killings of George Floyd and Ahmaud Arbery, Taylor's death set off widespread protests about how the legal system treats Black citizens as well as particular criticisms about the dangers of no-knock warrants.

Wanton endangerment is a Class D felony, the lowest of four classes of felonies in Kentucky. If found guilty, Hankison could be sentenced up to 5 years in prison for each count.

An alternate juror who was dismissed just before the deliberations began said she thinks Hankison "panicked."

"I believe, if I recall correctly, he said in his testimony that he had never been fired at in executing a search warrant in his 20 years," the woman, who did not want to give her name, told CNN. "So that must have been a big shock for him."

Fifteen jurors heard the case but only 12 were needed to decide it. Three jurors, including this woman, were selected at random to be dismissed.

"At the time that they started drawing the names from the basket, I still, at that time did not really have a clear indication at all, which way I would have voted," she said.

Hankison choked up when he defended himself on the stand

In court over five days, prosecutors called 26 witnesses as they argued that Hankison shot blindly into the apartment in a direction perpendicular to where the shot originated. His gunfire went through Taylor's apartment and whizzed through the neighboring apartment, prosecutors said.

"One or two more inches and I would have been shot," testified the neighbor, Cody Etherton.

On Wednesday, Hankison took the stand and defended his decision to open fire, at times choking up in tears.

He testified that when the shooting began he retreated from the apartment door to a sidewalk and then to the side of the home. He said he shot at what he believed was the flash of a muzzle from a rifle-wielding gunman, firing five times into sliding glass doors and five times into a bedroom window in an attempt to protect his fellow officers.

"It appeared to me they were being executed with this rifle," Hankison said. "I returned fire through the sliding glass door, and that did not stop the threat."

He did not realize at the time, he testified, that another apartment was positioned directly behind Taylor's. No rifle was found at the scene. In opening statements, Whaley said only a Glock pistol was found inside the apartment.

Kentucky Attorney General Daniel Cameron declined to press charges directly related to Taylor's death, saying the officers were justified in their use of force because Taylor's boyfriend, Kenneth Walker III, shot at an officer first, believing they were intruders.

Two other officers who were part of the botched raid, former Sgt. Jonathan Mattingly and former detective Myles Cosgrove, asserted their Fifth Amendment rights not to testify. They were not charged in the case but could be in an ongoing federal investigation.

The incident began on March 12, 2020, when as part of a narcotics investigation a Jefferson County Circuit Court judge approved five search warrants for locations linked to Taylor's ex-boyfriend, Jamarcus Glover, including at Taylor's home.

Early the next morning, Hankison, Mattingly and Cosgrove were among a team who carried out a no-knock warrant at Taylor's home. They rammed in the front door, startling Taylor and Walker.

Thinking they were intruders, Walker grabbed a gun he legally owned and fired a shot when the officers broke through the door, hitting Mattingly in the leg.

That triggered a volley of return fire from the officers, including Hankison. Taylor, who was standing in a hallway with Walker, was shot multiple times. Walker was not injured.

"Somebody kicked in the door and shot my girlfriend," Walker said in a 911 call.

Walker was at first charged with attempted murder of a police officer and first-degree assault, but prosecutors later decided to drop the charges.

The Kentucky statute says someone "is guilty of wanton endangerment in the first degree when, under circumstances manifesting extreme indifference to the value of human life, he wantonly engages in conduct which creates a substantial danger of death or serious physical injury to another person."

Mathews pointed the jury Thursday to the Kentucky legislature's definition of "wantonly," and said for Hankison to be guilty of wanton endangerment, the jury would have to find he was aware he was taking -- and consciously disregarding -- an unjustifiable risk.

Hankison didn't know the other apartment was behind Taylor's, but even if he did, his gunfire was not unjustifiable because he was firing to save what he perceived was an attempted execution of his fellow officers, Mathews said.

"The fact that his bullets traveled through (to the other apartment) ... is a terrible thing, but it's not criminal," Mathews said.

Whaley, the assistant attorney general, argued Hankison must have seen while driving up that the complex was full of multi-unit buildings, and had to have seen the neighboring apartment while walking up.

"There is no way that any of those officers who walked up to that breezeway could have failed to see four doors in that breezeway," Whaley said.

Whaley said other officers in the group -- other than Mattingly and Cosgrove, who were in the line of fire -- correctly chose not to shoot. She argued Hankison was shooting "with no target" and therefore shouldn't be firing.

She pointed to another officer's testimony that he couldn't see into the windows when he walked up.

"Mattingly and Cosgrove were in the line of fire. Not this defendant -- he was over here shooting wildly through sliding glass doors covered with vertical blinds and drapes," Whaley said.

Death led to months of protests

Taylor's death, and the lack of charges against the officers involved, led to months of protests in Louisville. Her story reached greater prominence later in the spring as part of nationwide protests and chants of "Black Lives Matter" and "Say Her Name."

None of the three officers who opened fire in the raid still work for the police department. Hankison was fired in late June 2020, Cosgrove was fired in January 2021, and Mattingly retired in April 2021.

On the stand Wednesday, Hankison denied any wrongdoing but expressed remorse for how the raid went down.

He said he felt "horrible" when he learned that his bullets had gone through Taylor's apartment and into the neighboring home. He described the incident as a "tragedy" that "didn't have to happen."

Finally, he testified he felt empathy for the neighbor, and then spoke to Taylor's family.

"Ms. Taylor's family, she didn't need to die that night --" Hankison said, before he was cut off by an objection. The words caused some members of the public sitting in the gallery to gasp and sob.