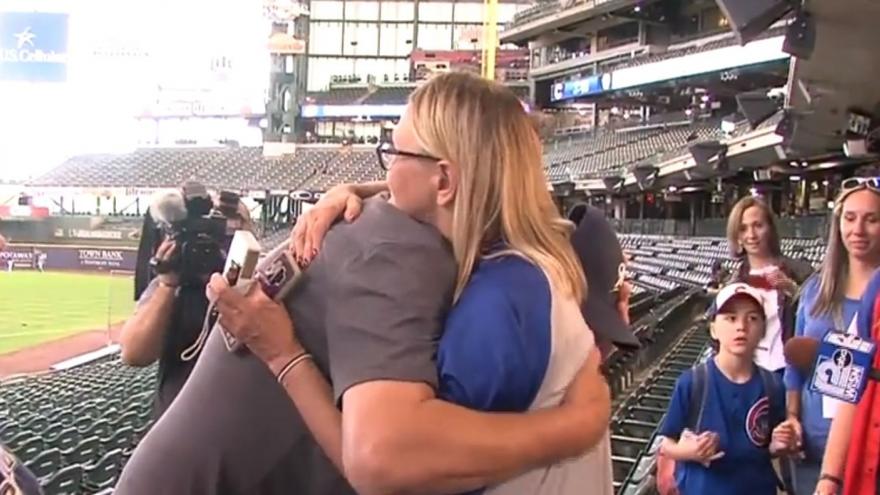 MILWAUKEE, Wisc. (WDJT) -- Tom Schroeder, the Brewers fan who received a heart transplant from a Cubs fan, threw out the ceremonial first pitch with his donor's niece ahead of Saturday's Brewers game.

After spending 50 days in the hospital in August of 2018, Schroeder underwent surgery at Aurora St. Luke's where he received the heart of 32-year-old donor Joshua Holland.

Schroeder recently wrote a letter to Holland's family and he received a letter back.

"Hopefully I would be a comfort to them to comfort them in their loss and my gain. It's hard to celebrate when I think about them," Schroeder said.

But, Saturday night, he did celebrate as Schroeder met the family of his donor for the first time ahead of Saturday's Brewers - Cubs game at Miller Park.

"They're just alike, I can already tell. So, he would be very happy that it was someone like him," the niece of Schroeder's donor Jerzie Wilkerson said.

But, there's one thing that sets them apart, Holland was a Cubs fan and Schroeder is a Brewers fan.

"To hear that he's a Brewers fan, kinda disappointed but it's fine," Wilkerson said laughing. "I'll let it slide."

In marking the occasion, Brewers Manager Craig Counsell and Cubs Manager Joe Maddon caught the ceremonial pitches, as they showed the crowd of thousands that there's much more than brings us together, then divides us on the diamond. As for Schroeder, it's the gift of life and finding loved ones to cherish it with.