Brian Laundrie left home without phone or wallet and his parents were concerned he might hurt himself, source says 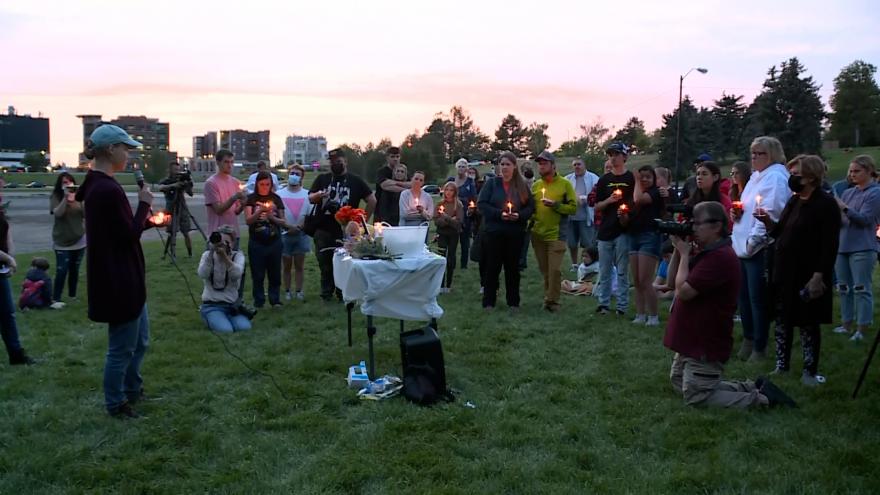 (CNN) -- A source close to the family of Brian Laundrie told CNN's Chris Cuomo on Thursday that Gabby Petito's fiancé, who is now the subject of a federal warrant, left his parents' Florida home in last Tuesday without his cell phone and wallet.

Laundrie's parents were concerned that he might hurt himself, the source said. Laundrie has not been seen since that Tuesday and authorities have been searching a nature reserve in Venice, not far from the parents' home in North Port.

A North Port Police spokesperson declined to comment on the report.

"I can not give any statement to a timeline at this time. That investigation is being conducted by the FBI," North Port Police Public Information Officer Josh Taylor told CNN.

The FBI did not immediately respond to a request for comment.

Earlier, the US District Court of Wyoming issued a federal arrest warrant for Laundrie, according to the FBI's Denver field office, after a grand jury indicted him for his "use of unauthorized devices" after Petito died.

"While this arrest warrant allows law enforcement to arrest Mr. Laundrie, the FBI and our partners across the country continue to investigate the facts and circumstances of Ms. Petito's homicide," FBI Special Agent in Charge Michael Schneider said in a statement posted on Twitter.

According to the indictment, Laundrie used a debit card and PIN number for accounts that did not belong to him for charges over $1,000 between the dates of August 30 and September 1.

The news comes as investigators again searched a 25,000-acre Florida nature reserve for any sign of Laundrie, who returned home September 1 from a road trip without Petito.

Laundrie's family told police he left home with his backpack September 14 and told them he was going to the reserve near their home. On Thursday evening, North Port Police announced via a tweet that it had halted its search for Laundrie at the reserve and that search teams would be back on Friday.

Petito's remains were found Sunday in an undeveloped camping area in Bridger-Teton National Forest in Wyoming, and her death was ruled a homicide on Tuesday in preliminary findings. She was reported missing by her family on September 11.

"We urge individuals with knowledge of Mr. Laundrie's role in this matter or his current whereabouts to contact the FBI," Schneider said Thursday. "No piece of information is too small or inconsequential to support our efforts in this investigation.

An attorney for Laundrie's family emphasized in a statement that the warrant was not for Petito's death but related to activities that took place afterward.

"It is my understanding that the arrest warrant for Brian Laundrie is related to activities occurring after the death of Gabby Petito and not related to her actual demise," Steve Bertolino said. "The FBI is focusing on locating Brian and when that occurs the specifics of the charges covered under the indictment will be addressed in the proper forum."

'We won't forget about you'

Meantime, a small crowd gathered Wednesday night in Salt Lake City to mourn the 22-year-old, whose death has captured the attention of people nationwide.

The couple had been visiting national parks in the West in their van, chronicling their travels on social media with the hashtag #VanLife, before Petito went missing. And though she never lived in Utah, Petito's love of nature and her time there -- including an encounter with Moab police that was captured on bodycam -- has connected her with the community.

"We won't forget about you. We won't let your light dim," vigil organizer Serena Chavez said before the group.

"We will remember other women or children who are missing," Chavez continued, raising a broader problem highlighted by Petito's disappearance. "Their families are devastated, and I can only imagine what Gabby's family is going through."

Before she moved to Florida, Petito had worked as a hostess at Smoke on the Water in Wilmington, North Carolina. Coworkers there say she made everyone feel loved, according to CNN affiliate WWAY. It was another community upon which the young woman made her mark.

"She's not just a name. She's not just a case. She was a person, and she was very special to a lot of people and many of us here," the restaurant's general manager, Lara Witschen, told WWAY. "She was a good soul, a good spirit, and touched so many lives. That's what we want her to be remembered for."

A small memorial now also marks the spot in Wyoming where Petito's remains were found this week. Petito's stepfather, Jim Schmidt, left a memorial at the site and sunflowers, "which were his daughter's favorite flower," family attorney Rick Stafford told CNN.

A neighbor who lives directly across the street from the home Petito shared with Laundrie and her family told CNN the last time she saw Laundrie at the North Port home was the weekend of September 10.

Karyn Aberts said she saw Laundrie and his family "in the neighborhood out in the front yard," saying it looked like "a normal ... they were going for a walk kind of thing," and that she "never thought anything about it."

Aberts told CNN outside her home that she'd watched Petito and Laundrie converting the van they eventually drove across the country. (Officials would later find that van, a white Ford, at the Laundrie home.)

"They seemed to be sitting and laughing in their car and then the van that they were working on," Aberts said, noting the last time she saw Petito was early in the summer, before the couple left on their road trip.

Asked whether she ever saw anything odd between Petito and Laundrie that would have been a red flag, Aberts said no.

Witness says she saw a 'commotion' involving the couple

Petito's story has become a national obsession for many, spurring digital detectives to comb through the couple's online trail to try to solve the case. The story has also further highlighted the nearly 90,000 missing persons cases active at the end of 2020, according to the National Crime Information Center. Few missing persons cases are met with as much urgency and national attention as Petito's.

It also has spurred people to come forward with accounts of Petito's last days.

Nina Angelo and her boyfriend, Matt England, saw a "commotion" last month as Petito and Laundrie were leaving the Merry Piglets Tex-Mex restaurant in Jackson, Wyoming, she told CNN Wednesday.

Petito was in tears and Laundrie was visibly angry, going into and out of the restaurant several times, showing anger toward the staff around the hostess stand, Angelo said. The couple's waitress was also visibly shaken by the incident, said Angelo, who told CNN she did not see any violence or physical altercation between Petito and Laundrie.

A manager at Merry Piglets, who declined to give her name, did see "an incident" at the restaurant on August 27 and called the FBI on Wednesday, she told CNN. The manager declined to describe what happened and said the restaurant did not have surveillance video of the incident.

Separately, Jessica Schultz saw Laundrie parked in a white van on August 26 at Grand Teton National Park, and no one appeared to be with him, she told the San Francisco Chronicle.

And in a series of videos on TikTok, Miranda Baker said she and her boyfriend gave Laundrie a ride on August 29 in Wyoming -- and that he claimed he was camping by himself for multiple days while Petito was back at their van working on social media posts.

Baker said they picked up Laundrie while he was hitchhiking in Colter Bay, Wyoming, which is not far from where Petito's remains were found. He offered to pay $200 for the ride before he even got in the car, she said.

911 call of a domestic dispute

Petito's mother received an odd text on August 27 that became the last communication from her, police in Florida said in a recent search warrant affidavit. Petito also stopped posting to social media at that time.

Evidence from a 911 call about a "domestic dispute" involving Petito and Laundrie shows the couple's volatile relationship was not as aspirational as their sun-drenched lives on Instagram and YouTube suggested.

A man who saw the domestic dispute between Petito and Laundrie in Utah last month said, "They were talking aggressively at each other, and something seemed off."

In a handwritten sworn statement, the witness said it appeared the two were arguing over control of Petito's phone. "At one point she was punching him in the arm and/or face and trying to get into the van." The witness's first name is Chris and last name was redacted in the document provided by Moab City Police to CNN.

The witness said he heard Petito say, "Why do you have to be so mean?" although Chris added that he couldn't be sure if the comment was meant to be taken seriously.

Police later stopped the couple, and previously released police documents and body-camera video reveal what followed that day. Moab city officials have since announced they will investigate the Moab City Police Department's handling of the dispute between Petito and Laundrie.

Although the Petito and Laundrie are described in a police report as getting into a physical fight following an argument, "both the male and female reported they are in love and engaged to be married and desperately didn't wish to see anyone charged with a crime," Officer Eric Pratt wrote in the report.

At the suggestion of police, the couple separated for the night, the report said, which described Petito as "confused and emotional."

A National Park Service ranger who also responded to the call spent about 90 minutes with Petito and warned her that her relationship with Laundrie had markings of a "toxic" one, the ranger told the Deseret News of Utah.

"I was imploring with her to reevaluate the relationship, asking her if she was happy in the relationship with him, and basically saying this was an opportunity for her to find another path, to make a change in her life," ranger Melissa Hulls told the Deseret News.