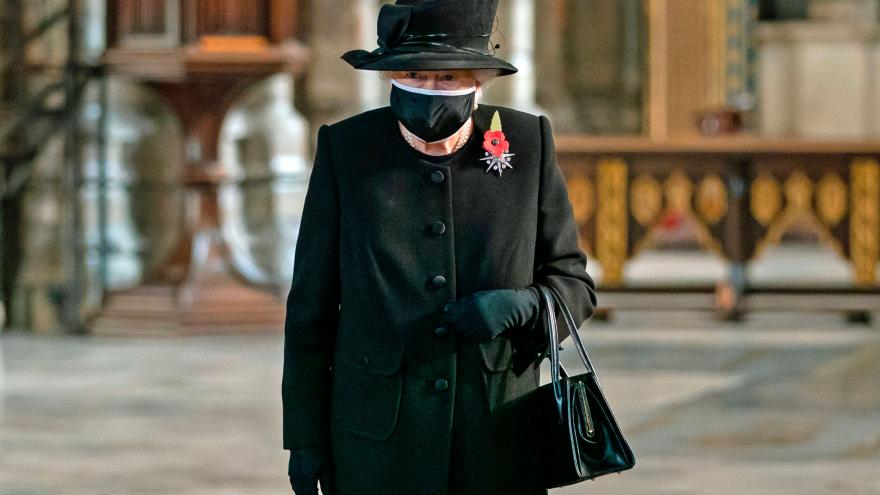 (CNN) -- Britain'sQueen Elizabeth II has worn a mask for the first time while appearing in public during the pandemic.

The 94-year-old monarch wore the mask during a commemorative ceremony in London earlier this week.

The event was held at Westminster Abbey ahead of Remembrance Sunday on November 11, the day the UK pays tribute to those who lost their lives in war.

"The Queen marked the centenary of the burial of the Unknown Warrior at Westminster Abbey this week, in a personal tribute ahead of Remembrance Sunday," Buckingham Palace said in a statement.

The black mask, which was edged with white, is believed to have been made by Angela Kelly, the Queen's personal adviser and curator, who designs many of the monarch's outfits according to PA Media news agency.

The grave of the Unknown Warrior is the resting place of an unidentified British soldier who died in World War I. The site became a symbol of national mourning in the aftermath of the war and has retained its commemorative importance in the years since.

In October, Queen Elizabeth appeared at her first royal engagement since the start of the pandemic but did not wear a face mask despite a resurgence of the virus. In England, face coverings are compulsory in most indoor settings.

She was pictured at the Porton Down science park in southern England alongside her grandson Prince William, who was also not wearing a mask. Social distancing guidelines were in place at the event and everyone the British monarch met had tested negative for the virus.

Buckingham Palace said the Queen decided not to wear a mask after consulting her own medics and scientists at Porton Down.

The royal family was directly hit by the pandemic in March when Prince Charles, Queen Elizabeth's eldest son and the heir to the British throne, tested positive. His office announced the diagnosis at the time and the royal completed a period of self-isolation in Scotland.

The 71-year-old later said he had only experienced mild symptoms.

Last week it emerged that Prince William, second-in-line to the throne, also tested positive for Covid-19 earlier in 2020, according to the BBC, citing palace sources.

When exactly William was infected is unclear. The Sun newspaper, which broke the story, said that he took a seven-day break from calls and video messages from April 9 to April 16.

The Queen's grandson reportedly told an observer that he did not publicly reveal his diagnosis for fear of worrying people. But his decision to keep the matter private has raised questions as to why the British public was not told William was ill.

The pandemic has swept through public life in the UK. British Prime Minister Boris Johnson also fell ill with the virus in the spring, while his top adviser Dominic Cummings spent a period in self-isolation after displaying symptoms.

England is currently in a second national lockdown due to a surge in coronavirus cases.