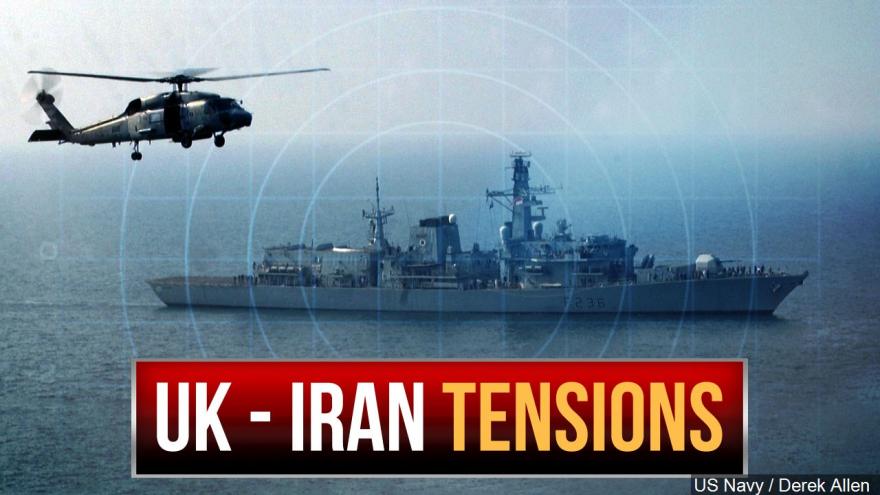 LONDON (AP) — Britain's foreign secretary said Iranian authorities seized two vessels Friday in the Strait of Hormuz, actions signaling an escalation in the strategic waterway that has become a flashpoint in tensions between Tehran and the West.

Foreign Secretary Jeremy Hunt said one of the seized ships was British-flagged and the other sailed under Liberia's flag. The crews members comprise a range of nationalities but are not believed to include British citizens, he said.

"These seizures are unacceptable," Hunt said entering an emergency government meeting to discuss securing the release of the two vessels and their crews. "It is essential that freedom of navigation is maintained and that all ships can move safely and freely in the region."

Details of what took place remained sketchy. Iran said earlier Friday that it had seized a British oil tanker in the Strait of Hormuz,

The tanker Stena Impero was taken to an Iranian port because it was not complying with "international maritime laws and regulations," Iran's Revolutionary Guard declared.

A statement from Stena Bulk, which owns the tanker, said it was unable to contact the ship after it was approached by unidentified vessels and a helicopter in the Strait of Hormuz.

The company said the tanker, with 23 crew members aboard, was in international waters when it was approached but subsequently appeared to be heading toward Iran.

U.K. Chamber of Shipping chief executive Bob Sanguinetti said the seizure represented an escalation in tensions in the Persian Gulf and made it clear more protection for merchant vessels was urgently needed.

He claimed the action is "in violation of international regulations which protect ships and their crews as they go about their legitimate business in international waters."

The British government should do "whatever is necessary" to ensure the safe and swift return of the ship's crew, Sanguinetti said.

The incident came just two days after Washington claimed that a U.S. warship downed an Iranian drone in the Strait. Iran denied that it lost an aircraft in the area.

On June 20, Iran shot down an American drone in the same waterway, and Trump came close to retaliating but called off an airstrike at the last moment.

Tensions in the region have been growing since the Trump administration withdrew a year ago from Iran's 2015 nuclear deal with world powers. After the withdrawal, the U.S. imposed harsh sanctions, including on Tehran's oil trade, that have sent the Iranian economy into a tailspin.

Iran's government has desperately tried to get out of the chokehold, appealing to the other partners in the deal, particularly Europe, to pressure the U.S. to lift the bruising sanctions. Europe wants to maintain the nuclear deal, but has not been able to address Iranian demands, particularly concerning the sale of oil, without violating U.S. sanctions.

On Friday, Iran and the United States emphatically disagreed over Washington's claim that a U.S. warship downed an Iranian drone in the Strait of Hormuz. American officials said they used electronic jamming to bring down the unmanned aircraft, while Iran said it simply didn't happen.

Neither side provided evidence to prove its claim.

At the White House, President Donald Trump said flatly of the Iranian drone: "We shot it down." But Pentagon and other officials have said repeatedly that the USS Boxer, a Navy ship in the Strait of Hormuz, actually jammed the drone's signal, causing it to crash, and did not fire a missile. The officials spoke on condition of anonymity to discuss sensitive technology.

Trump's national security adviser, John Bolton, said, "There is no question this was an Iranian drone, and the USS Boxer took it out as the president announced yesterday because it posed a threat to the ship and its crew. It's entirely the right thing to do."

In Tehran, the Iranian military said all its drones had returned safely to their bases and denied there was any confrontation with the USS Boxer, an amphibious assault ship.

"We have not lost any drone in the Strait of Hormuz nor anywhere else," tweeted Deputy Foreign Minister Abbas Araghchi.

Iran's Revolutionary Guard on its website Friday said the drone recorded three hours of video of the USS Boxer and five other vessels Thursday beginning when the ships first entered the Strait of Hormuz. There was no immediate explanation as to how the video was evidence that no Iranian drone was destroyed.

The strategically vital Strait of Hormuz is at the mouth of the Persian Gulf and serves as the passageway for one-fifth of all global crude exports.

Trump on Thursday said the USS Boxer took action after the Iranian drone closed to within 1,000 yards of the warship and ignored commands to stay away. The president accused Iran of "provocative and hostile" action and said the U.S. acted in self-defense.

The Revolutionary Guard said its forces continue to monitor all movements by foreigners — especially "the terrorist forces" of the U.S. and the British in the Strait and the Gulf.

After Trump pulled the U.S. out of the Iran nuclear deal with world powers last year and imposed economic sanctions against Tehran, the Iranians have pushed back on the military front in recent weeks, with Washington accusing Tehran of threatening American forces and interests in the region.

Iran's foreign minister, Mohammad Javad Zarif, suggested in New York as he arrived for a meeting at the United Nations that Iran could immediately ratify an agreement to allow broader checks of its nuclear facilities by U.N. inspectors if the U.S. dropped its sanctions.

China urged Washington to consider the offer, calling it "a positive signal that Iran is willing to seek a compromise solution."

The Pentagon said Thursday's incident happened in international waters while the Boxer was entering the Gulf. The Boxer is among several U.S. Navy ships in the area, including the USS Abraham Lincoln, an aircraft carrier that has been operating in the North Arabian Sea for weeks in response to rising tensions.

The Iranians and Americans have had close encounters in the Strait of Hormuz in the past, and it is not unprecedented for Iran to fly a drone near a U.S. warship.

Zarif blamed Washington for the escalation and accused the Trump administration of "trying to starve our people" and "deplete our treasury" through sanctions.

Jill Lawless in London and David Rising in Berlin contributed.