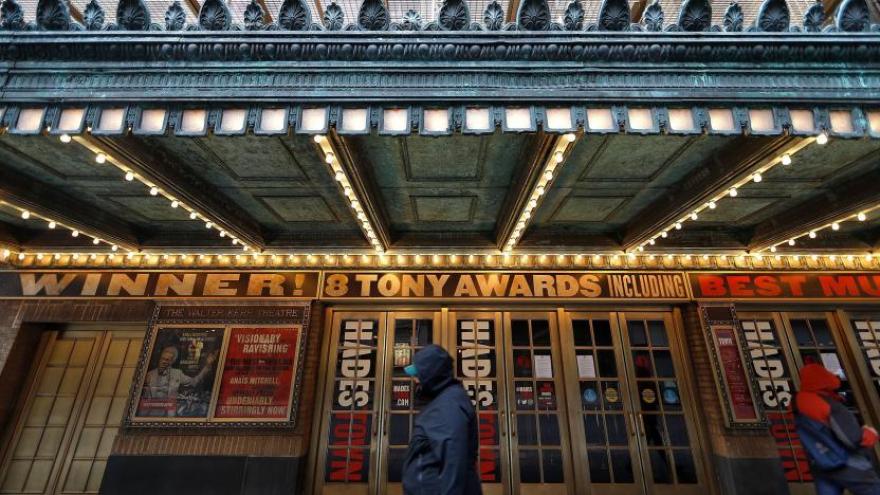 A view of the Walter Kerr theater on March 22, 2020 in New York City. The Broadway League announced Wednesday that all shows will be suspended until June 7

The Broadway League, a trade association representing theater owners and producers, previously announced that all shows would be suspended through April 12.

But as the coronavirus pandemic continues to hit the US, particularly New York City which is home to many shows, the Broadway League announced that the suspension has been extended for another two months.

"Our top priority continues to be the health and well-being of Broadway theatregoers and the thousands of people who work in the theatre industry every day," President of the Broadway League Charlotte St. Martin said in a statement.

"Broadway will always be at the very heart of the Big Apple, and we join with artists, theatre professionals, and fans in looking forward to the time when we can once again experience live theatre together," she added.

The 41 theaters that make up Broadway have been closed since March 12 after New York Gov. Andrew Cuomo banned gatherings of more than 500 people. Cuomo has since mandated for all nonessential workers to stay home.

Before the coronavirus hit New York, this season on Broadway had raked in over $1.3 billion and more than 11 million attendees, according to the Broadway League. But like many other industries across the US, Broadway has been devastated by the pandemic, costing countless jobs and millions of dollars.

Still, Broadway performers have been helping keep spirits high by posting videos of themselves lip-synching and inviting high school theater kids to post videos of them singing songs from their own canceled musicals. The original cast of "Hamilton" even reunited through a Zoom session, organized by John Krasinski, to surprise a young fan with the musical's opening number, "Alexander Hamilton."