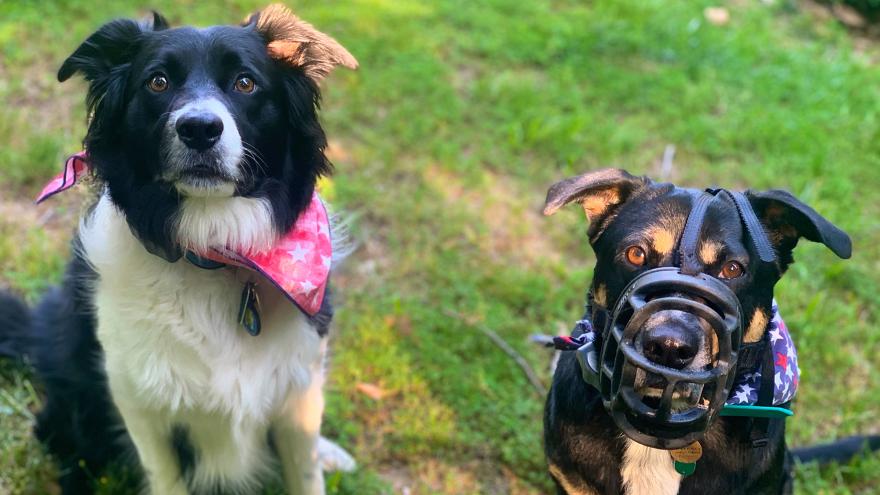 Bonnie (right) needs to be muzzled so she doesn\'t eat too many cicadas. Clyde (left) doesn\'t need a muzzle because he doesn\'t overindulge. - Julie Matthews

But every time the 4-year-old Shepherd mix goes outside in the yard to play or relieve herself right now, her owner, Julie Matthews, straps a muzzle over Bonnie's face.

The goal? To keep her from indulging in a potential buffet of Brood X cicadas that have recently begun emerging from the ground after a 17-year hiatus.

"We don't have many cicadas yet, but I'm afraid once she sees piles of them she'll go nuts," said Matthews, who lives in Fairfax Station, Virginia.

Bonnie loves to hunt. On several occasions, Matthews said, Bonnie has smashed catmint bushes outside their home trying to pounce on insects and salamanders. Once, she nearly put a toad in her mouth.

While Matthews said the muzzle gives her dog a creepy look -- which she describes as not unlike the fictitious Hannibal Lecter -- the dog owner feels more confident letting Bonnie run free knowing the moveable cicada feast is off the table.

Cats and dogs react to cicadas

While many people are anxious about Brood X's emergence across 16 states and the District of Columbia, those with a canine or feline companion to care for have additional things to navigate.

Some pet owners are already learning how their cats and dogs react to the sudden, abundant source of potential overstimulation and overeating at their doorstep.

"Our dog, Leo, thinks of the cicadas as his never-ending buffet that falls from the sky," said Laura Jenkins, who lives in Reston, Virginia, of her 8-year-old rat terrier mix.

He eats the insects as experts say dogs tend to -- whole -- and crunches the exoskeletons "like chips," she said.

"I feel like I need to be on high alert to ensure he does not spoil his meals with too much snacking," said Jenkins via email. That includes staying away from heavily wooded areas on their daily walks, where a large concentration of the insects is piling up on the ground.

Cats tend to react to motion -- think of a game of cat and mouse -- and are more prone to bat at and play with the insects than eat them, said veterinarian Dr. Craig Felton, medical director of Old Dominion Animal Health Center in McLean, Virginia. They also usually chew what's in their mouth.

"It's unlikely cats would eat as many (cicadas) as dogs," Felton said.

That said, he did recently treat a cat in his clinic that had injured its tail after busting through a screened door in pursuit of the flying insects, so collateral cicada injuries aren't beyond the realm of possibility.

Gorging on cicadas can cause problems

Pets gorging on cicadas to the point of vomiting is a legitimate concern, Felton said.

When they're out in their fenced yards, left to their own devices, dogs, in particular, can get into trouble, he said.

"That's where we see the most problems with dietary indiscretions," Felton said.

When a dog's prey instinct kicks in, he said, overeating can extend to things like deer or fox droppings or even a construction worker's lunch, in addition to cicadas.

Cicadas themselves are not toxic, Felton said, but it's the quantity some pets manage to ingest that can cause trouble.

"The exoskeletons that protects cicadas' innards aren't very digestible, and their wings and legs are like hooks," he said. "In the delicate lining of the stomach, that can be tough," causing digestive and GI issues. It can makes dogs throw up to the point of dehydration where they need to be rehydrated at the vet.

Pets aren't the only ones feasting right now

Cicada snacks have a wider appeal than you might think. Chocolate covered cicadas are enticing some humans to try something new.

And for the animal kingdom at large -- from birds and raccoons to chipmunks and turtles -- the insects offer a bountiful if fleeting food source.

"Cicadas appear to be quite palatable to many animals," said Gene Kritsky, dean of behavioral and natural sciences at Mount St. Joseph University in Cincinnati.

"I have seen blue jays snatch cicadas in flight," said Kritsky via email. "Many other birds feast on cicadas including robins, titmice, sparrows, bluebirds, geese and turkeys."

Birds learn to tell male and females apart, said James English, an animal ecologist and adjunct professor at Uniformed Services University of the Health Sciences in Bethesda, Maryland, who did his doctoral work on periodical cicadas.

Only the male cicadas call, he said, so birds learn to peck at the insects to elicit a sound.

"If it doesn't make any noise it will catch it because it's full of juicy, nutritious eggs," he said.

Birds even learn to pull off cicada wings, which aren't worth eating, said English.

Dogs tend to be less picky. And for some, cicadas aren't the safest bite-sized snack.

The insects, which can grow roughly 1.5 inches long, can potentially cause a choking hazard to smaller dogs with narrow tracheal and esophageal diameters, said Dr. Jerry Klein, chief veterinary officer of The American Kennel Club.

Among the breeds that fall into that category, he said, are pugs, Shih Tzu and French bulldogs. But choking is more likely to happen to any dog that eats rapidly and doesn't chew its food, he said.

If your dog has eaten cicadas and is having trouble swallowing -- but not having trouble breathing, which is considered an emergency -- Klein said to offer it a small piece of bread to see if it will help "push the object down to the stomach."

"Every dog is different, but in general, eating one or two cicadas should not harm a dog, though eating too many may cause vomiting and/or diarrhea," he said.

There's a small chance that cicadas could cause an allergic reaction in some pets, said Dr. Randy Benson of Benson Animal Hospital in Bethesda, Maryland.

Such a reaction, he said, is "similar to humans having allergic reactions to shellfish," but it's very rare.

The best way to prevent animals from consuming too many cicadas, Benson said, is to stay attentive during daily walks -- something you should do anyway to ensure pets don't swallow other objects that are hard to digest, he said.

"We are all lazy and like the idea of a fenced-in backyard where dogs can do their business and we can go about our chores," Felton said. "But pet owners are learning that now is maybe not the time to do that."

"This is a wonder of nature we have to put up with," he said.