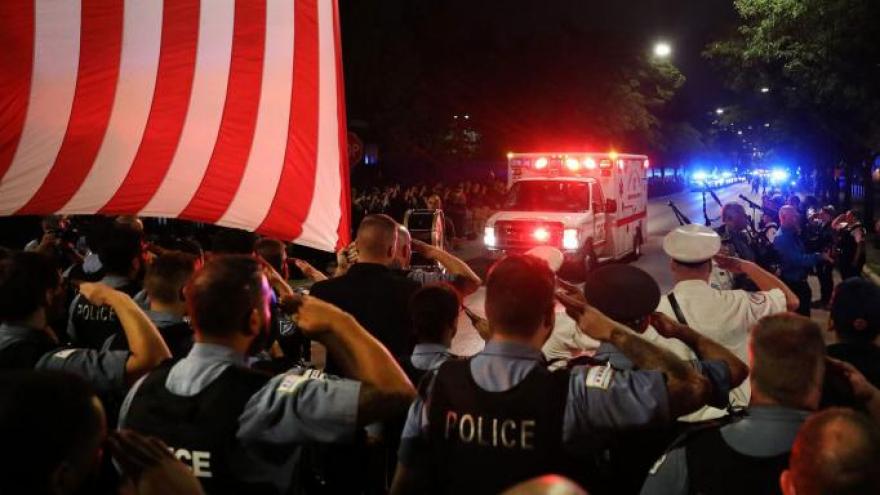 (CNN) -- Prosecutors on Tuesday outlined the cases against two brothers charged in connection with the slaying of a Chicago police officer and the shooting of her partner after a traffic stop Saturday night.

Brothers Emonte and Eric Morgan were each denied bail in separate hearings for their alleged roles in the death of Officer Ella French, 29, and the wounding of another officer, who has not been identified. Neither was asked to enter a plea.

A woman who was also in the vehicle was not charged, authorities said.

Prosecutors described a traffic stop that went wrong, saying one brother initially cooperated but ran from the scene and that the other shot the officers.

According to the state's attorneys prosecuting the cases, Eric Morgan fled the scene but returned, taking the gun and attempting to get rid of it. He was held by civilians until police could arrest him, a prosecutor said.

Chicago Police Superintendent David Brown said at a news conference Sunday that one of the offenders was shot and hospitalized.

At Emonte Morgan's hearing on Tuesday, prosecutors said that when French and the other officer were shot, they fell with their cameras facing up and continuing to record. At one point, Emonte Morgan can be seen stepping over one of the victims, according to Assistant State Attorneys Nicholas Hosler and James Murphy.

Emonte Morgan, 21, did not appear in court because he is in the hospital being treated for a gunshot wound, according to Chicago Police Officer Timothy McKeon. Morgan is represented by assistant public defender Jennifer Hodel, who was present for the hearing.

At a separate bail hearing Tuesday for Eric Morgan, Murphy said Eric Morgan was driving when officers pulled him over. He was initially cooperative and admitted to being in possession of cannabis, Murphy said.

After Eric Morgan took the gun from his brother he was detained by civilians and is accused of striking one of the civilians in the arm with the gun, Murphy said.

The civilians held his body to the ground until police arrived, the prosecutor added.

Genevieve O'Toole, an assistant Cook County public defender representing Eric Morgan, said her client has no prior gun crimes and should not be held for the actions of another individual whom he could not control, whom he had no power over, and whose actions took place when he wasn't even present.

She said Morgan was not in possession of a weapon when the traffic stop occurred and noted he was initially cooperative, following French's directions to get out of the vehicle, admitting to having cannabis, and handing her his car keys.

When the situation started going downhill, he ran away, O'Toole said. She also said Emonte Morgan ran toward Eric Morgan to give him the gun.

She told the judge that Eric Morgan was able to post $500 bond.

"Instead of leaving the scene, instead of not engaging ... it appears he re-engaged with what was clearly a terrible situation," Beach said. "Mr. Morgan made himself a part of that ongoing event ... by taking possession of the very weapon used to kill this officer."

The judge said Eric Morgan is a threat to the community because he reengaged with a violent act that was ongoing and fought with the individuals who attempted to detain him. He also said the gun was found close to Eric Morgan.

Cook County State's Attorney Kim Foxx said in a statement that her office "will prosecute these cases to the fullest extent of the law," she said.

A third man is the subject of federal charges.

The Department of Justice has charged Jamel Danzy, 29, of Indiana, with conducting a straw purchase to obtain the semiautomatic handgun used in Saturday's shooting, according to a news release from the department.

Danzy bought the gun in Hammond, Indiana, from a federal firearms dealer in March and is accused of "knowingly making a false written statement to acquire a firearm," according to the criminal complaint filed in the US District Court in Chicago.

The federal complaint also alleges that Danzy knew the person he purchased the gun for wasn't legally allowed to buy a firearm due to a felony criminal conviction.

He faces charges of conspiracy to violate federal firearm laws, including knowingly transferring and giving a firearm to an out-of-state resident, knowingly making a false written statement to acquire a firearm, and knowingly disposing of a firearm to a convicted felon, according to the criminal complaint.

If convicted, Danzy faces up to five years in federal prison for the conspiracy charge, the news release said.

Danzy made an initial court appearance Monday in Chicago. He is in federal custody and is scheduled for a detention hearing Wednesday afternoon, the DOJ notes. It is unclear whether Danzy has legal representation.

Brown said Sunday that 11 Chicago police officers have been shot in 2021.