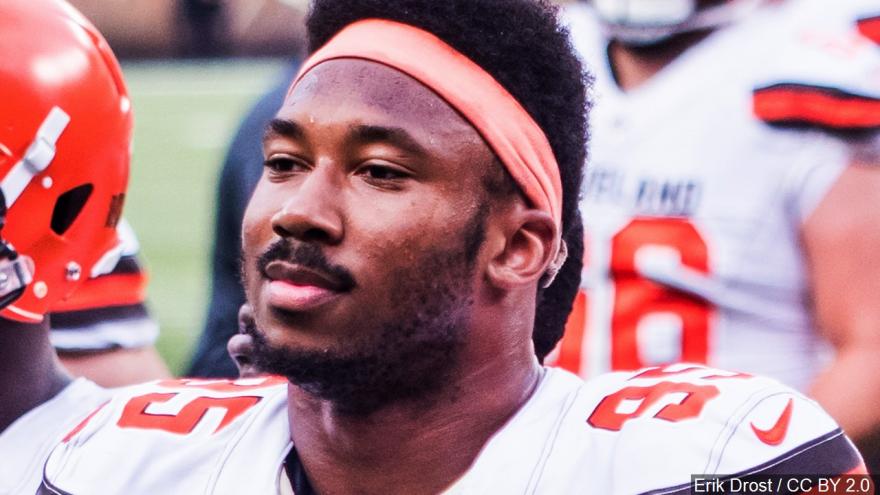 CLEVELAND (AP) — Myles Garrett swung a helmet. The NFL will soon swing back at the Cleveland Browns star.

Garrett could be facing an unprecedented league suspension for his violent outburst Thursday night, when he ripped off Pittsburgh quarterback Mason Rudolph’s helmet and clubbed him on the head during the final seconds of Cleveland’s 21-7 win.

Garrett’s shocking actions on national TV will come with a price. It’s possible the league could come down hard on the former No. 1 overall pick, who made strides in cleaning up his game after picking up some personal fouls earlier this season.

Following the game, Garrett was contrite, but the damage was already done.

“What I did was foolish, and I shouldn’t have allowed myself to slip like that,” Garrett said softly. “It’s out of character.”

It’s now out of his hands, and it’s possible the league could end Garrett’s season by docking him the final six games.

In 2006, Tennessee’s Albert Haynesworth was suspended five games after he stomped on Dallas Cowboys center Andre Gurode's head. Haynesworth’s punishment is the longest for on-field behavior in league history.

After pulling Rudolph down with eight seconds to go following a short pass, Garrett wrestled with Pittsburgh’s QB on the ground with both players grabbing at each other’s heads. When they got to their feet, Garrett ripped off Rudolph’s helmet and swung wildly, hitting the second-year QB on top of the head.

Garrett was thrown to the ground by Steelers guard David DeCastro and center Maurkice Pouncey threw punches and kicked Garrett in the head as players from both sidelines poured onto the field in a scene that goes to the top of the list of skirmishes in the bitter Pittsburgh-Cleveland rivalry.

The Steelers were livid about Garrett’s conduct.

Browns coach Freddie Kitchens said Garrett apologized to him and the defensive end said he intends to talk to his teammates.

“The next time I see them, I’ll address them,” he said. “I am hurting my whole team with what I did, and it could come back to bite us. I don’t know what kind of repercussion I face, but I have to be better.”

The Browns will visit the Steelers on Nov. 14.

Kitchens was disappointed with Garret for losing his cool and overshadowing a huge win for the Browns, who have won two straight games to salvage a season that was starting to slip away.

“You have to be able to maintain your composure in times like that and under no circumstances do we want anything to do with anything like that,” Kitchens said. “I am embarrassed. Myles is embarrassed. It is not good. He understands what he did, he understands it is totally unacceptable, and we have to get through it.”

The Browns have been among the league’s most penalized teams, and their lack of discipline has been a poor reflection on Kitchens in his first year as coach.

The second such shot was by Browns safety Damarious Randall, who lowered his head and delivered a nasty hit on Steelers rookie Diontae Johnson, who suffered a concussion and had blood coming from one ear.

Kitchens took issue with the idea his team is reckless, and said he was disappointed for his other players.