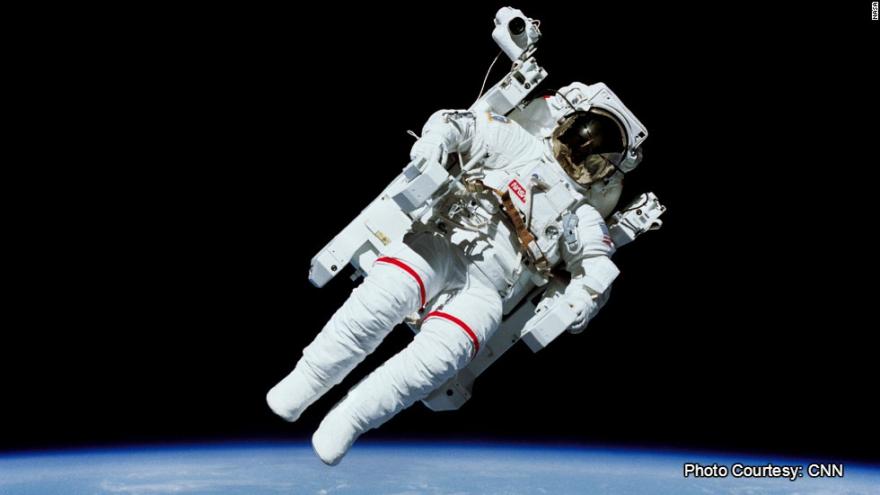 McCandless flew alongside the space shuttle Challenger in a jetpack-style craft called a Manned Maneuvering Unit, using his hands to control his movement a few meters away from the shuttle. It was the first-ever spacewalk that didn't employ "restrictive tethers and umbilicals," NASA said.

Crew members used a 70 mm camera to shoot the photo through windows on the shuttle's flight deck.

"My wife (Bernice) was at mission control, and there was quite a bit of apprehension," he wrote in 2015. "I wanted to say something similar to Neil (Armstrong) when he landed on the moon, so I said, 'It may have been a small step for Neil, but it's a heck of a big leap for me.' That loosened the tension a bit."

McCandless died Thursday, and NASA announced the death a day later. Acting NASA Administrator Robert Lightfoot said in a statement, "Our thoughts and prayers go out to Bruce's family."

"He will always be known for his iconic photo flying the MMU," Lightfoot said.

A retired US Navy captain born in 1937 in Boston, McCandless was among 19 astronauts selected by NASA in April 1966.

"He was a member of the astronaut support crew for the Apollo 14 mission and was backup pilot for the first crewed Skylab mission," NASA said in a profile. "He flew as a mission specialist on two space shuttle missions. On STS-41B in 1984, he performed the famous spacewalk and on STS-31 in 1990 he helped deploy the Hubble Space Telescope."

McCandless collaborated on the MMU's development and "logged more than 312 hours in space, including four hours of flight time using the device," NASA said.

He won many awards and honors, including the Legion of Merit in 1988 and the Department of Defense Distinguished Service Medal in 1985. He also was awarded a patent "for the design of a tool tethering system that was used during shuttle spacewalks."