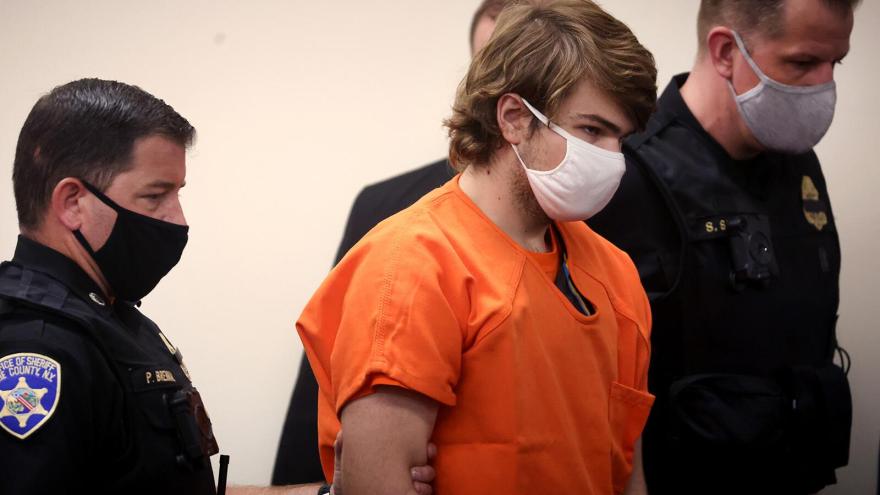 Payton Gendron, the 18-year-old indicted in last month's racist supermarket shooting in Buffalo, New York, that left 10 people dead is scheduled to be arraigned on June 2, a spokesperson for the Erie County prosecutor said.

(CNN) -- The 18-year-old suspect in the Buffalo, New York, supermarket shooting that killed 10 people pleaded not guilty to the 25-count indictment against him, his attorney said in court Thursday afternoon.

Peyton Gendron, who was dressed in an orange jumpsuit and shackled at his hands and feet, was asked by the judge if he understood the charges against him and he nodded and said "yes, ma'am."

Authorities allege ample evidence indicates the White teen was motivated by race and that he targeted a supermarket in a predominantly Black community.

An Erie County jury indicted the alleged shooter on one count of domestic act of terrorism motivated by hate in the first degree for killing the 10 individuals "in whole or in substantial part because of the perceived race and/or color of such person or persons regardless of whether that belief or perception was correct," the indictment reads. It's the first time the charge has been levied since it was added to state law in 2020, Erie County District Attorney John Flynn announced.

If convicted, Gendron faces life without parole, the only sentence for the domestic terror charge, Flynn said. In order to use this charge, prosecutors have to prove five or more individuals were murdered with the intent of racial motivation, he added.

They also indicted Gendron on 10 counts of murder in the second degree as a hate crime, saying he "intentionally committed this act in whole or in substantial part because of a belief or perception regarding the race and/or color of [DECEASED VICTIM], regardless of whether the belief or perception was correct," it reads.

Gendron was also charged with criminal possession of a weapon, according to court documents.

Prosecutors invited families to attend a private meeting prior to Thursday's hearing to understand the charges.

"I can assure the families and the community that justice is being done," Flynn said.

Additionally, there is now a gag order in the case, which prevents all sides from speaking to the public following a defense motion last week. An exception was made on Thursday for the prosecutor to brief the public on the charges and the indictment, Flynn said.

Brown said many members of the community have expressed a desire for a memorial to the "Buffalo 10" and he is looking at how to do that properly and sensitively.

Official: 'No mistake' it's a hate crime

Eleven of the 13 victims at Tops Friendly Markets were Black and two were White, officials said. Among the victims, ranging in age from 20 to 86, were a heroic former police officer who tried to stop the gunman and a long-term substitute teacher and a taxi driver who, according to his nephew, "took pride in helping people."

More charges could come at the federal level, as authorities are investigating the shooting as both a hate crime and a case of racially motivated violent extremism, said Stephen Belongia, FBI special agent in charge of the Buffalo field office.

Gendron arrived at the market in the middle of the afternoon on May 14, "very heavily armed" and wearing tactical gear, Buffalo Police Commissioner Joseph Gramaglia said. He also had a camera and livestreamed his rampage, the commissioner said.

He allegedly opened fire in the store parking lot, shooting four people, before entering the store where he killed the former policeman, who was working as a security guard, Gramaglia said. Gendron then shot eight more people inside the store before surrendering to police, the commissioner alleged.

On Thursday, a 911 dispatcher who mishandled a call from a Tops supermarket worker during the shooting was fired, the Erie County Department of Personnel confirmed to CNN. The dispatcher, whose name was not released, had been on paid administrative leave since May 16, the department said.

Latisha Rogers, the assistant office manager at the Buffalo market who called 911, told CNN the dispatcher asked her why she was whispering during the call.

"'What? I can't hear you,'" the dispatcher responded. "'Why are you whispering? You don't have to whisper, they can't hear you.'"

County Executive Mark Poloncarz previously said the dispatcher was "inappropriate" during the call.

"We teach our 911 call takers that if someone is whispering, it probably means they are in trouble" and the caller may be in "an area of concern, not just with regards to active shooters but potentially with regards to domestic violence that someone may be calling," Poloncarz said at the time.

During his arrest, the suspect made disturbing statements describing his motive and state of mind, including an acknowledgment he was targeting the Black community, according to an official familiar with the investigation.

"The evidence that we have uncovered so far makes no mistake that this is an absolute racist hate crime," Gramaglia said. "This is someone who has hate in their heart, soul and mind."

Garcia described the shooting as "pure evil," adding that it was a "straight-up racially motivated hate crime."

In a 180-page document purportedly written by the suspect and posted online before the shooting, the author describes himself as a fascist, White supremacist and anti-Semite and writes that White Americans are being "replaced" by people of other races.

The document, which CNN has obtained, also provides minute-by-minute details of the alleged deadly plan, including a color-coded map of the store and the equipment and clothing he planned to use -- from military-style body armor down to his brand of underwear. It also lays out how the author intends to "shoot all black people."

The suspect visited the store in March and again the day before the shooting to gather information about the location, officials said.

Further investigation revealed Gendron made a "generalized threat" while attending Susquehanna Valley Central High School last year, and state police visited him after he did a school project on murder-suicides, officials said.

"The state police arrived at his house at that point last year," Garcia said. "He stayed at a facility -- I'm not sure if it was a hospital or a mental health facility -- for a day and a half."

The suspect planned to continue his shooting rampage beyond the supermarket, Gramaglia said, adding there was documentation indicating he allegedly planned to target "another large superstore."

In social media posts, Gendron wrote that online research led him to target the 14208 zip code because it has a higher Black population than other locations he was considering.

He also says he pondered attacking a church or an elementary school but chose the supermarket because of how many people frequent grocery stores. He used Google's popular times feature for Tops Friendly Market in determining the busiest time of day to attack the store, the posts show.