Buffalo shooting victims: 'Hero' guard and a teacher who was a 'pillar of the community' are among 10 killed 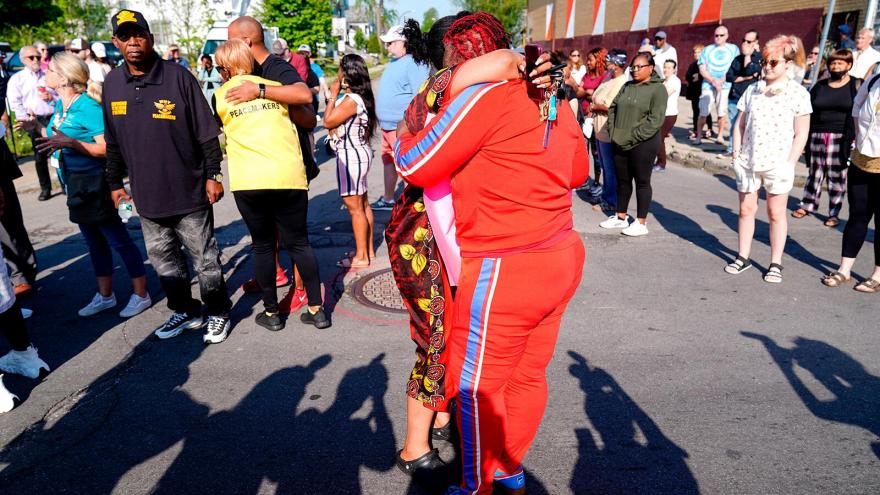 People embrace outside the scene of a shooting at a supermarket, in Buffalo, NY, Sunday, May 15, 2022.

(CNN) -- A retired police lieutenant. A substitute teacher who was a "pillar of the community." A loving mother and wife. A beloved auntie.

All were among the 10 people killed in a shooting at a Buffalo, New York, supermarket Saturday in a massacre authorities believe was racially motivated.

Thirteen people, ages 20 to 86, were shot. Eleven were Black and two were White, Buffalo police said.

• Zaire Goodman, 20, of Buffalo, was treated and released from hospital

• Jennifer Warrington, 50, of Tonawanda, New York, was treated and released from hospital

New York Gov. Kathy Hochul announced $2.8 million in funding for the victims and their families, according to a statement from her office.

"The past 24 hours have been traumatizing for New Yorkers," Hochul said in a statement Sunday. "The entire world is watching how we will come together as New Yorkers to overcome this unthinkable tragedy. Buffalo, my hometown, is the City of Good Neighbors and New York State will be good neighbors for them."

New York state's Office of Victim Services will be in Buffalo throughout the week to help administer funding and assist victims and families in obtaining financial assistance from the state, the statement read.

Investigators are also reviewing a purported manifesto posted online Saturday in connection with the shooting probe, two federal law enforcement officials told CNN. The manifesto's author describes himself as a fascist, a White supremacist and an anti-Semite.

Details the victims and their lives have started to emerge.

Here's what we know about them.

The "hero" security guard who engaged the suspect but was fatally shot was Aaron Salter, a former Buffalo police lieutenant, said the mayor.

Salter was well respected throughout the police department, Brown told CNN's "New Day Weekend," and had worked at the supermarket for several years after retiring.

Salter "is a hero who tried to protect people in the store, tried to save lives and in the process, lost his own life," Brown said.

The supermarket's security guard "fired multiple shots at the suspect" when he entered the store, Buffalo Police Commissioner Joseph Gramaglia said, but the suspect was wearing tactical gear that protected him from the guard's gunfire.

The mayor had seen her son walking on Jefferson Avenue, the road outside the supermarket, and assumed Garnell Whitfield was there to lend a hand, Brown recalled Sunday to worshipers at the True Bethel Baptist Church. The mayor asked the former fire commissioner if he was there to help.

"He said, 'Yes, mayor. But I'm here because I'm looking for my mother,'" Brown said.

Ruth Whitfield had been visiting the former commissioner's father in the nursing home, as she did each day, he told the mayor, and she stopped at the supermarket to buy some groceries.

"We've been calling her and she's not answering the cell phone. And her car is still in the parking lot. And I'm afraid that she's one of the victims of this shooting," Brown recalled Garnell Whitfield saying.

Speaking at the same event, Hochul said, "We must do something about this."

"I thought I was strong," she said, "but hearing the mayor tell the story of our commissioner who's dedicated his life to saving lives and loses his mother over an act of racism and White supremacy in this community -- now I'm angry, my friends."

Pearl Young, 77, was a substitute teacher and a "true pillar in the community," her family said in a statement.

"Pearl was a long-term substitute teacher with the Buffalo Public School District and recently worked at Emerson School of Hospitality," according to the statement.

"If there is one consolation that we can take from this tragedy is that we know that mom is up in heaven with our dad (her Ollie) and dancing and shouting with our heavenly father," the statement read.

Geraldine Talley, 62, was doing her regular grocery shopping with her fiancé on Saturday when she was shot and killed, her niece Lakesha Chapman told CNN.

Talley was Chapman's "Auntie Gerri," her father's little sister and an amazing woman, she said.

Chapman lives in Atlanta and had just arrived in Buffalo to be with family on Sunday when she talked to CNN by telephone.

Chapman called Talley her "Auntie Gerri" and said she was an amazing woman. She said Talley was her father's little sister.

"She's sweet, sweet, you know, the life of the party," Chapman said. "She was the person who always put our family reunion together, she was an avid baker ... mother of two beautiful children."

"She was just a lover. I mean she didn't meet a stranger, and that's why this hurts so much," said Chapman, who lives in Atlanta and had just arrived in Buffalo to be with family on Sunday when she talked to CNN by telephone.

Chapman said Talley was at the front of the store when the shooting started and her fiancé had gone to get orange juice, so he was able to escape unharmed.

Five hours went by before her family found out she had been killed, Chapman said.

"We're outraged," she said. "This is not, obviously, the first racially triggered attack in America. However it is the first that hits our home."

It is "the most numbing, numbing feeling ever," she said.

"She was shopping and this man comes out of his neighborhood to attack because of her skin color, because of her ZIP code, you know, because it was predominantly Black," Chapman said. "She was innocent. And it's -- there's no words to describe it."

Heyward Patterson "took pride in helping people," said his nephew, Terrell Clark. Patterson was a 67-year-old taxi driver who was waiting for passengers outside the supermarket Saturday when he was gunned down, said Clark.

"And if the person had little or no money, he would still give them a ride," Clark said. "He had a big heart."

Clark remembered his uncle -- a father of three -- as a happy man who always wore a smile. He enjoyed telling jokes, singing at his church and always "dressed to impress," Clark said.

When he learned of the shooting, Clark messaged and called Patterson, he said, but knew something was wasn't right when his uncle didn't respond.

"I knew something was wrong. He never ignores my calls," Clark said. "I can't believe this happened. My heart is broken into a million pieces."

Zaire Goodman, 20, was the only Black person shot Saturday who did not die, according to New York State Sen. Tim Kennedy. Goodman's mother, Zeneta Everhart, is the director of diversity and inclusion in Kennedy's office, and the state senator visited with the family on Sunday, he said.

Now, a week out from his 21st birthday, Goodman is recovering at home, Kennedy said.

"He is recovering well. He is bandaged up," Kennedy told CNN's "New Day" on Monday. "He is visiting with family and he's taking care of himself and his incredible mother is taking care of her son."

The 20-year-old worked at the supermarket, Goodman's grandfather confirmed to Buffalo News.

Goodman was shot "through the neck," Kennedy said, and the state senator believes he was spared by "divine protection."

"There is no question in my mind that God was with us that day and spared Zaire to see his 21st birthday," Kennedy said.

"We will have a great celebration next week," he added, "but do you know what? There were 10 people that will never see their families again."