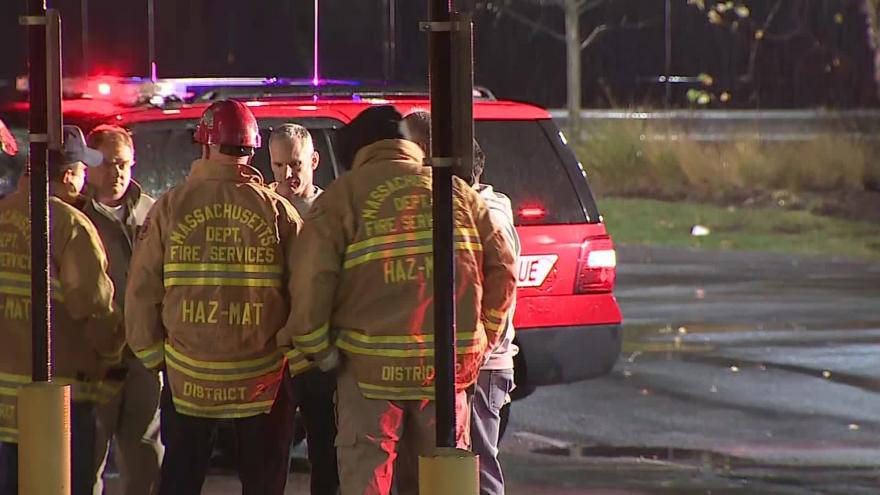 (CNN) -- A Buffalo Wild Wings employee died -- and 10 other people were sent to hospitals -- after they were exposed to a cleaning agent used on the kitchen floor of one of the chain's Boston-area restaurants Thursday evening, fire officials said.

The worker who died apparently was trying to squeegee the sanitizeroff the floor after a coworker who started using it was overcome by fumes, Burlington interim Fire Chief Michael Patterson told reporters.

The incident at the restaurant in Burlington began around 5:30 p.m., with workers and customers -- some coughing -- streaming out of the facility as fumes spread, witnesses told CNN affiliate WCVB.

A worker, intending to clean the kitchen floor, put asanitizercalled "Super 8" -- a cleaning agent with sodium hypochlorite -- on the floor, Patterson said. That person quickly was sickened, apparently by fumes, and went outside, he explained.

A second worker "attempted to squeegee the product out of the building when he was overcome," Patterson said.

Firefighters were called, and responders found the second employee suffering from nausea outside. An ambulance took that man to a hospital, where he died, Patterson said.

Ten other people at the restaurant -- eight employees and two customers -- checked themselves in to hospitals Thursday, with symptoms including breathing difficulties, watery and runny eyes, and shortness of breath, Patterson said.

They were being treated with oxygen, and none of them was believed to be in serious condition, according to Patterson.

The restaurant was closed for the night. Police and the federal Occupational Safety and Health Administration will investigate, Patterson said.

"We are shocked and saddened to learn of this tragic accident at our franchise-owned sports bar and are working closely with our franchisee and the authorities while they conduct an investigation," Buffalo Wild Wings said in a statement. "Because the investigation is ongoing, we are unable to share any additional comment at this time. Any further questions will need to be referred to the local authorities."

A manufacturer of Super 8, on its website, describes the product as a sanitizer "specifically designed for use in mechanical or hand dishwashing operations."

Patterson said he was told that Super 8 is a "common product used in floor cleaning."

"For some reason tonight, there was just a reaction that led to this," he said.

Customers told CNN affiliate WHDH that they could smell a strong chemical odor, and people closest to the kitchen began coughing and moving outside.

"Imagine, like, you're in the pool, but add bleach to that. It smelled horrible," Michael Burnstein told WHDH.

"I think one of the things that went through my mind is, we're sitting there, like, 'What are we supposed to do? Is everything OK? Should we even be breathing this air?'"