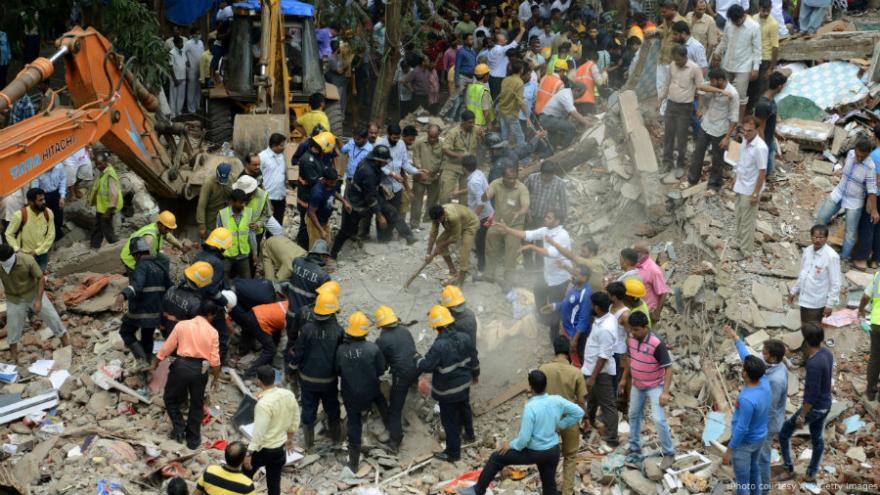 (CNN) -- At least ten people are dead after a building collapsed in Indore, in the central Indian state of Madhya Pradesh, according to a local medical official.

Three others have been injured, two of whom are in critical condition, according to Dr. Amarnath Yadav, the chief medical officer at Maharaja Yeshwant Rao Hospital. Officials on the ground said it's unclear if others may be trapped inside.

A preliminary investigation revealed that a heavy vehicle rammed into a hotel's ground floor, which may have caused the collapse, said Deputy Inspector General of Police Harinarayana Chari Mishra. Rescue workers were clearing debris and continuing the rescue mission.

The incident comes about seven months after a three-story building collapsed in southern Mumbai in August, killing at least 33 people. The building collapse coincided with heavy rains that killed five people in Mumbai, devastating parts of India's bustling financial hub.

In July 2017, a five-story building collapsed in a suburb of Mumbai, killing at least 17 people. The building's owner was detained by police and accused of carrying out an illegal renovation, said Deven Bharti, joint commissioner of Mumbai police.

One of the most deadly incidents occurred in 2013, when an illegal building in Thane -- not far from Mumbai -- collapsed, killing more than 70 people.