Bump stocks are turned in or destroyed as ban takes effect 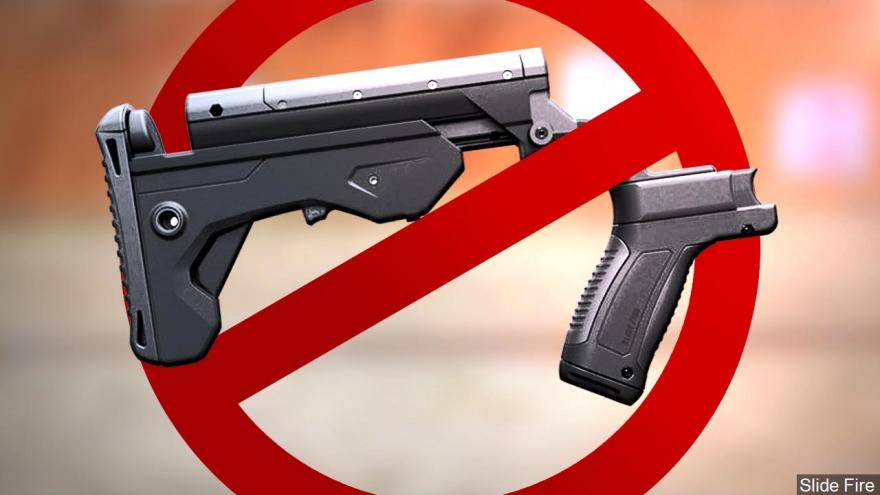 BOISE, Idaho (AP) — The largest supplier of bump stocks turned in its entire remaining inventory to be destroyed — some 60,000 devices. Washington state's buyback program was so popular it ran out of money. One dealer held a "Viking funeral" for his last bump stock, pouring a can of beer on it and then melting it down with a flamethrower.

A nationwide ban took effect Tuesday on bump stocks, the attachment used by the gunman in the 2017 Las Vegas massacre to make his weapons fire rapidly like machine guns.

How many of the estimated half-million devices believed to be in circulation in the U.S. are still around is anyone's guess, but in the weeks leading up to the ban, there were signs that many were destroyed or turned in as required.

Anyone in possession of a bump stock from now on can be charged with a federal offense punishable by up to 10 years in prison.

The Bureau of Alcohol, Tobacco and Firearms outlawed the attachments at President Donald Trump's direction after the Las Vegas gunman rained fire from his high-rise hotel suite on concertgoers, killing 58 people in the deadliest mass shooting in modern U.S. history.

On Thursday, the Supreme Court declined to put the ban on hold.

As the prohibition drew near, RW Arms in Fort Worth, Texas, featured a countdown clock on its website and heavily promoted last chances to buy the accessories. By the time the ban took effect, RW Arms was left with 60,000, probably worth millions, since they sell for around $150 to $250 each.

The company turned over crates of them to the ATF, and a video showed boxes being loaded onto a conveyer belt and fed into an industrial grinder.

Washington state set aside $150,000 to offer owners $150 for each device they turned in to police. Within weeks, the money had been used up.

The ATF declined to say how many people brought their bump stocks to an ATF office.

T.J. Kirgin, owner of a firearms tactical gear company in St. Peters, Missouri, said that in the weeks before the measure went into effect, he made one last sweep through his warehouse to make sure he didn't have any more devices left.

And then he took his very last one and with some friends held a mock funeral for it, reducing it to a hunk of melted plastic embedded in a rock.

While gun control activists welcomed the end of the line for a device blamed for horrifying carnage, Kirgin called it not just the day bump stocks died but the day freedom died.