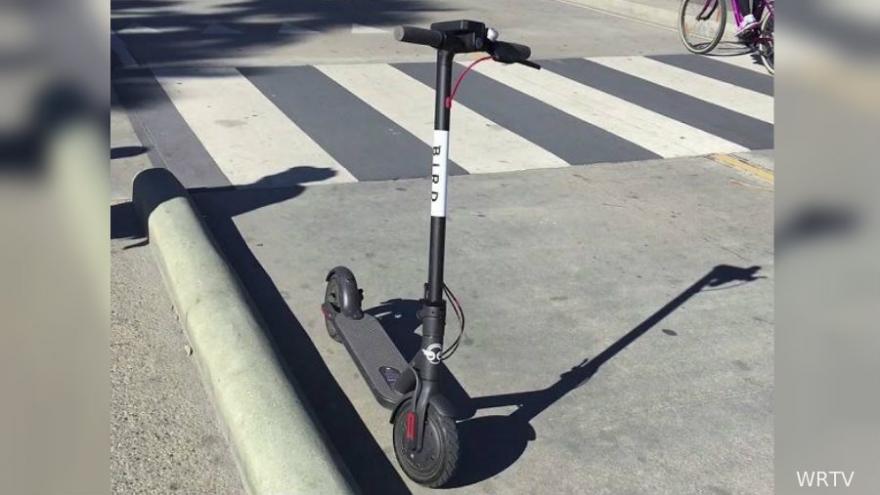 INDIANAPOLIS, Ind. (WRTV) -- Bird says it is cooperating with Indianapolis police investigators after one of its electric scooters was reportedly used as a getaway vehicle in a burglary Tuesday morning.

The burglary happened around 10:30 a.m. Tuesday at a townhome in the 1300 block of Central Avenue.

Michael Leppert says he was in the shower when he heard someone downstairs. He thought it was his dog, and didn’t think much of it until he noticed his wallet, laptop and backpack – which Leppert thinks he used to carry off the other items – were gone.

While waiting for the police to arrive, Leppert says he spoke to his neighbor, who reported seeing what she thought was a delivery man in his backyard a few minutes earlier.

After contacting police, Leppert says he shot an email to Bird, hoping they would be able to use their information to assist in the investigation.

“We know it was one of their scooters and it was back here in our area, and he was on his cellphone, so I don’t know if he has an account – which would be hilarious if he did – but we hope they are connected somehow and we can see at least a GPS study of the scooter being in our driveway here,” Leppert said.

Leppert said he was less concerned about the value of the items he lost and more concerned that other thieves will use electric scooters.

“I’m more concerned about thieves using that for getaway reasons and there not being a way to use the technology that’s on that scooter to track them down,” Leppert said. “So I’m hoping that they are interested enough to try to look into whether they can be helpful. I don’t know that they can, but I’d certainly think they have the technology to do it, so I hope they’re interested in helping.”

To activate a Bird scooter, users must download an app on their smartphone and then enter an email to create an account. The app requires users to allow Bird to see their location – to help find nearby scooters. Paying for a ride takes a credit card.

Bird’s terms of service forbids users from riding the scooters during the commission of a crime. It also warns against wearing a backpack while riding.

Bird released a statement Wednesday saying the company was cooperating with the investigation of the incident:

"We do not condone criminal behavior regardless of the mode of transportation that is used to commit the crime. When any type of irresponsible or criminal behavior is associated with someone on a Bird, we encourage people to report this behavior to us to investigate. Bird investigates each report and takes appropriate next steps, which can include removing individuals from the platform. We are currently investigating the situation, and fully cooperating with local authorities during this process."