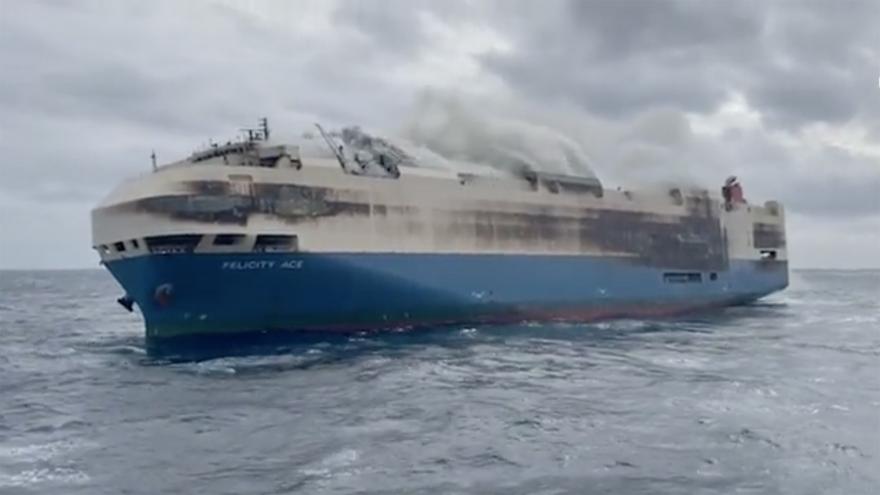 (CNN) -- The Felicity Ace, the cargo ship carrying cars and SUVs from brands including Audi, Porsche,Bentley and Lamborghini, has now sunk. It had caught fire February 16th and its crew abandoned the ship.

The largely burned out ship was being towed back to a safe port when it sank yesterday, according to a report provided by the salvage team to MOL Ship Management of Singapore, which operates thePanama-flagged ship. A spokesperson for Volkswagen Group confirmed that the automaker is aware of the vessel sinking.

The Felicity Ace had been carrying nearly 4,000 vehicles from various Volkswagen Group brands. A number of the vehicles were fully electric, including models from Volkswagen and Audi, something that could have made the fire more difficult to control. Fires involving lithium ion batteries are particularly difficult to extinguish.

Among the Lamborghini cars on the ship were some Aventador models. The V12-powered Aventador is Lamborghini's most expensive regular production model, priced at over $400,000. Fewer than 800 are built each year and this is the last year the model is being offered. Lamborghini of America CEO Andrea Baldi recently told the industry publication Automotive News that it could be difficult to replace the cars because each one is highly customized and, as it is, customers wait months for their cars. Most of the Lamborghinis on the ship were less expensive Urus SUVs and Huracán supercars.

Total damage costs for all the vehicleshave been estimated at about $335 million. VW has said the damage will be covered by insurance.

The ship had been travelling from Emden, Germany en route to Davisville, Rhode Island when it caught fire in the Atlantic Ocean about 90 miles south of the Azores. The Azores are islands in the Atlantic west of mainland Portugal.

The ship did not release any pollutants into the water as it burned, according to the shipping company. The environmental impact of the ship's total immersion in the water isn't yet known.