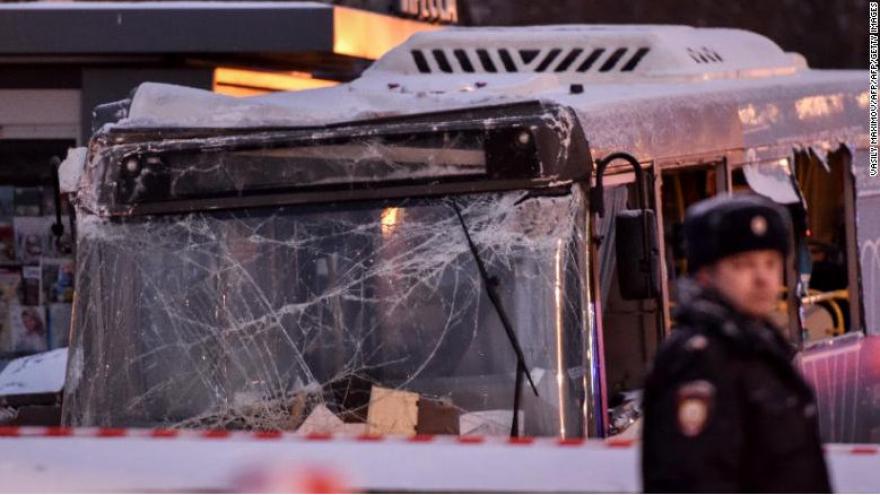 (CNN) -- A commuter bus in the Russian capital Moscow drove into a crowded underground walkway Monday, killing at least four pedestrians and injuring 11 others.

The bus entered the pedestrian passage near the Slavyansky Boulevard subway station at around 3:50 p.m. local time (7:50 a.m. ET), where it hit a number of commuters, according to Russian state news agency TASS.

Footage posted on Russian state media shows what appears to be the bus careening down stairs leading to the passage, hitting several people before coming to a halt.

Police took the driver into custody but said that authorities are not treating the incident as a deliberate attack, according to state media.

Investigators are considering two possibilities -- that the driver lost control of the bus or that the bus malfunctioned, state media reported. "The driver was detained and the authorities instituted a criminal case citing the services falling short of security requirements and encroachments on the safety regulations for public transport," the TASS report said.

The Russian Investigative Committee, quoted in Russian state news outlet Sputnik, said that the driver had reported that "the bus, while being at the bus stop, suddenly began to move on its own. At the same time, despite (the driver's) attempts to stop the bus, the braking system malfunctioned and the bus continued to move."

There was "a high degree of probability" that the driver did not engage the bus' brake systems, a statement from the manufacturer said.

"A preliminary analysis of the details of the incident shows that at the beginning of the movement the wheels of the bus were sharply turned to the right and the bus was moving with a significant deviation from the route," a statement from GAZ Group reads.

"At the same time, it can be assumed that with a high degree of probability the driver did not use any of the listed brake systems of the bus, let alone engine braking, otherwise it is guaranteed that the bus would stop."