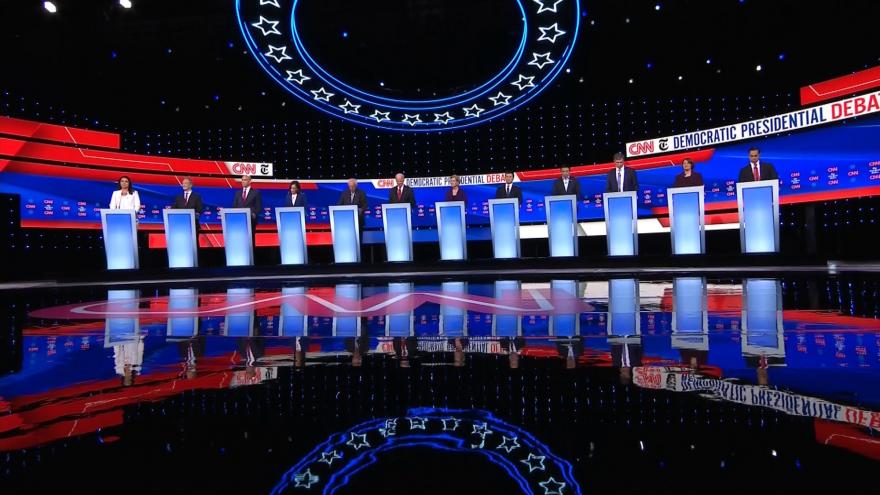 (CNN) -- In what amounted to a rough welcome to the front-runner arena, Sen. Elizabeth Warren became the main target in the 2020 race on Tuesday -- with many of her centrist rivals attacking her plans, her liberal bent and what they described as her evasiveness on whether taxes for the middle class would go up under her "Medicare for All" agenda.

South Bend, Indiana, Mayor Pete Buttigieg and Minnesota Sen. Amy Klobuchar led the charge against Warren by slamming her refusal to say that taxes for the middle class will go up under the "Medicare for All" plan that she has embraced, as other candidates piled on the newly minted front-runner. The Massachusetts senator took the stage at the CNN/New York Times debate in Westerville, Ohio, with a new status- -- essentially tied with former Vice President Joe Biden in first place in recent national polls.

Warren's slow and steady rise has made her a target of the other candidates, and Buttigieg was the first to turn the spotlight on what he characterized as her evasiveness. In a surprisingly fierce takedown unveiling a new and more aggressive stance, Buttigieg suggested that Warren's refusal to answer the question about middle-class taxes reflected the very quality that Americans hate about Washington, noting that she refused to give a yes-or-no answer to a yes-or-no question.

"This is why people are so frustrated," Buttigieg said, turning to Warren. "Your signature is to have a plan for everything, except this. No plan has been laid out to explain how a multi-trillion dollar hole in this plan that Sen. Warren is putting forward is supposed to get filled in."

Minnesota Sen. Amy Klobuchar, who has not yet qualified for the next debate, also seized the chance to draw attention to her opposition to Medicare for All and advocacy for a moderate approach to overhauling the health care system.

"At least Bernie is being honest here," Klobuchar said, alluding to Vermont Sen. Bernie Sanders' acknowledgment that taxes would go up for some under his Medicare for All plan and Warren's dodges when asked the same.

"We owe it to the American people to tell them where we will send the invoice," Klobuchar said, suggesting that 149 million people would be kicked off their insurance with the dramatic changes to the system under Medicare for All.

During her smooth and even performances in other debates, Warren has been able brush off attacks from the other contenders -- namely Biden. But politely side-stepping the attacks became almost impossible during the CNN/New York Times debate in Ohio as she took it from all sides and found herself on defense for the first time.

In one of the more fiery exchanges with Klobuchar, Warren jabbed at her critics for what she saw as their lack of imagination.

"Look, I understand that this is hard, but I think as Democrats we are going to succeed when we dream big and fight hard, not when we dream small and quit before we get started," Warren said.

It was among the first times the Warren had to get fired up on defense during a presidential debate and saw criticism from all comers, even normally conciliatory former Texas Rep. Beto O'Rourke.

But it was the moderates like Buttigieg who went after ther the most. The mayor argued there was a better way forward under his plan. He noted that under his plan Americans could stay on private plans if they chose to.

"(I'm) trusting you to make the right decision for your health care and for your family," he said. "It can be delivered without an increase" in taxes for the middle class, he added.

Warren continued to insist that costs "will go up for the wealthy, for big corporations" but that "they will not go up for middle class families."

"I will not sign a bill into law that raises their costs," Warren said.

But Buttigieg did not let up.

"I don't understand why you believe the only way to deliver affordable coverage is to obliterate private plans," he said, responding to Warren. "We're competing to be president for the day after Trump. Our country will be polarized, more than now, after everything we have been through, after everything we are about to go through, this country will be more divided. Why divide this country over health care when there's a better way to deliver coverage for all?"

Biden forcefully denied the allegations of wrongdoing in Ukraine by himself or his son made by President Donald Trump and his allies that are the center of the impeachment inquiry that has ensnared the President.

As the Democratic presidential candidates took the debate stage for the first debate after the beginning of the impeachment inquiry, Biden was put on the spot about whether it was appropriate for his son to be on the board of Burisma Holdings, a Ukrainian natural gas company, while Biden was in charge of Ukraine policy in the Obama administration.

"My son did nothing wrong. I did nothing wrong. I carried out the policy of the United States in rooting out corruption in Ukraine. That's what we should be focusing on. What I wanted to make a point about -- my son's statement speaks for itself. He spoke about it today," Biden said during the beginning of the CNN/New York Times debate in Westerville, Ohio, referring to an interview Hunter Biden gave to ABC.

"What I think is important is we focus on why it's so important to remove this man from office."

Biden is looking to untangle himself from the questions that the President has raised about his son Hunter's work in Ukraine while he was vice president.

Though there is no evidence of wrongdoing by either Biden, the matter has become serious enough that Hunter Biden did his first televised interview -- aired on Tuesday morning, just hours before the debate -- to underscore that he did not take advantage of his father's position of power.

"I did nothing wrong at all," Hunter Biden said in an interview with ABC News.

He said of his role serving on the board of a Ukrainian gas company: "Did I do anything improper? No, not in any way. Not in any way whatsoever," he said.

"However, was it poor judgment to be in the middle of something that is -- it's a swamp, in many ways? Yeah."

Veterans clash over US role in Middle East

Beyond the ideological debate on health care, one of the most interesting clashes of the night was between the only two veterans on the stage, Buttigieg and Rep. Tulsi Gabbard of Hawaii.

Gabbard, an Iraq War veteran who has called for US troops to leave Syria, criticized Trump's sudden decision to abandon Kurdish forces near the northern Syrian border -- a move that essentially opened the door for a Turkish military offensive against the longtime US allies. She described the "slaughter of Kurds" by Turkey as a consequence of "the regime-change war that we've been waging in Syria."

"Donald Trump has the blood of the Kurds on his hands -- but so do many of the politicians in our country from both parties who have supported this ongoing regime-change war in Syria that started in 2011," Gabbard said, "along with many in the mainstream media, who have been championing and cheerleading this regime-change war."

Buttigieg, who served in the Navy Reserve, told Gabbard she was "dead wrong."

He noted that he did not support going into Iraq and believes that the US should get out of Afghanistan, but said it was also the case that "a small number of specialized, special operations forces and intelligence capabilities were the only thing that stood between that part of Syria and what we're seeing now, which is the beginning of a genocide and the resurgence of ISIS."

"When I was deployed I knew one of the things keeping me safe was the flag on my shoulder represented a country that kept its word," Buttigieg said. "You take that away, it takes away what makes America America."

"What we were doing in Syria was keeping our word," Buttigieg responded. "Part of what makes it possible for the United States to get people to put their lives on the line to back us up is the idea that we will back them up, too. ... I would have a hard time today looking an Afghan civilian or soldier in the eye after what just happened over there. And it is undermining the honor of our soldiers. You take away the honor of our soldiers, you ever might as well go after their body armor next."