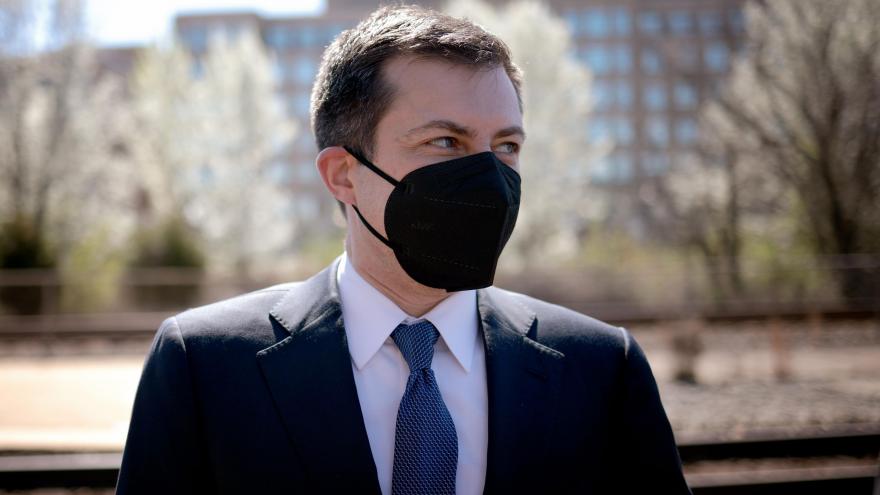 Transportation Secretary Pete Buttigieg on Sunday defended the Biden administration\'s broad definition of infrastructure in the American Jobs Plan, saying President Joe Biden is still aiming for Republican support for the plan while looking for progress on it by Memorial Day. - Win McNamee/Getty Images

(CNN) -- Transportation Secretary Pete Buttigieg on Sunday defended the Biden administration's broad definition of infrastructure in the American Jobs Plan, saying President Joe Biden is still aiming for Republican support for the plan while looking for progress on it by Memorial Day.

"I very much believe that all of these things are infrastructure because infrastructure is the foundation that allows us go about our lives," Buttigieg told CNN's Jake Tapper on "State of the Union."

Biden is pushing his roughly $2 trillion plan for improving the nation's infrastructure as his next major legislative focus after successfully signing his massive coronavirus relief package into law. The plan, however, has already met resistance from congressional Republicans who balk at its price tag and consider its definition of infrastructure -- from transportation to reshaping the US economy and social safety net -- as overly broad.

Asked by Tapper if he thought the package could be passed by July 4, Buttigieg said, "The President wants to see major action in Congress and real progress by Memorial Day. (House Speaker Nancy Pelosi) laid out that July timeline for getting something passed."

"You know, we've got some real kind of shot clocks on this in terms of things that have to get reauthorized by the end of September. So, you know, the sooner the better I think is the bottom line. We've got to get this done," he added.

The Transportation secretary stressed Sunday that the administration wants to act fast on infrastructure and that inaction is not an option, though he said the President would prefer to get Republican support for the package.

Democratic leadership is also facing some pushback on the proposal within their own ranks.

Sen. Joe Manchin warned last week that the Biden administration's massive package couldn't pass in its current form because he and a handful of other Senate Democrats believe the corporate tax hikes proposed in the bill -- designed to offset its costs -- are too steep.

The West Virginia senator said he would use the "leverage" he has in the 50-50 Senate to demand changes before voting to take up the bill, which has been introduced but expected to go through weeks or months of negotiations before being debated on the floor.

Energy Secretary Jennifer Granholm, making a pitch to Manchin on Sunday before a national audience, said the President's proposal will help Americans transition to new jobs.

"So much of this package will help not just West Virginia, but the states like West Virginia that have been historically mining, fossil fuels, extracting fossil fuels. Republicans and Democrats agree on the importance of not leaving communities behind where the market has moved in a different direction, like in coal, and so this will help to train people who are in that industry to move to these new technologies that are not a whole lot different from the skills that they may be using in mine and coal," Granholm said on ABC's "This Week."

Granholm also defended the broad definition of infrastructure, saying infrastructure is "what makes the economy move" and that includes broadband, the care economy and other components of the President's proposal that aren't "traditional infrastructure."