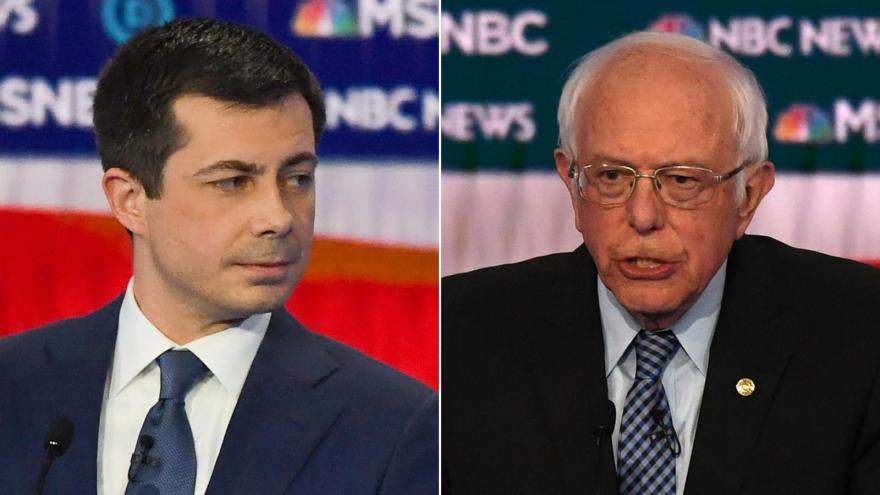 Pete Buttigieg will begin airing a new television ad in South Carolina on Friday night that attacks Sen. Bernie Sanders by name over his "Medicare for All" health care plan.

(CNN) -- Pete Buttigieg will begin airing a new television ad in South Carolina on Friday night that attacks Sen. Bernie Sanders by name over his "Medicare for All" health care plan.

The ad, which will run for a week ahead of the South Carolina primary later this month, is the first time Buttigieg has put money behind a television spot that attacks Sanders directly. It features a narrator arguing that Sanders' plan would "eliminate private insurance" and casts the Vermont independent as a polarizing figure.

A Buttigieg campaign aide declined to disclose how much the campaign was spending to air the ad, saying only that it will run the ad statewide.

"On health care, there's a choice," the narrator says, before an image of Sanders appears on screen and the narrator runs through Buttigieg's litany of complaints about Medicare for All.

"Bernie Sanders' Medicare for All would completely eliminate private insurance, forcing 150 million Americans off their current plans -- including 20 million seniors on Medicare Advantage," the narrator says. "Pete Buttigieg has a better way to lower costs and cover everyone."

As the narrators reads the script, bold text spells out each point on the screen.

Health care, a topic that comes up at nearly every town hall candidates host, is widely seen as the most important issue on the minds of voters headed into the presidential election.

The major distinction on the issue is between the Sanders-backed Medicare for All plan, a sweeping proposal that would overhaul the health care system in the country and create a single-payer government plan, and the Buttigieg-backed Medicare for All Who Want It plan, a more moderate approach that would not force people into government health coverage but would offer a public option for people who choose to enroll.

The policy has become one of the central distinctions between Sanders, who is widely seen as the Democratic front-runner, and Buttigieg, who turned in strong performances in Iowa and New Hampshire but now needs to prove he can win in diverse states like Nevada, where voters will caucus on Saturday.

The former South Bend, Indiana, mayor has used Medicare for All as a way to attack Sanders as too divisive, a point the narrator makes at the end of the ad.

"Instead of polarization," the narrator says, "Progress."

Sanders has fired back, accusing Buttigieg of standing against Medicare for All because of donations he has received from the pharmaceutical industry.

"Last year, the health care industry made $100 billion in profits. Pharmaceutical industry, top six companies, $69 billion in profit. And those CEOs are contributing to Pete's campaign and other campaigns up here," Sanders said at this week's debate here in Las Vegas. "It is finally time that we said as a nation, enough is enough; the function of a rational health care system is not to make the pharmaceutical industry and the drug companies rich."

Buttigieg first began hitting Sanders by name in ads about health care in October, when he began running a digital ad that called out both the Vermont senator and Massachusetts' Sen. Elizabeth Warren over the issue.

But Buttigieg's decision to put the ad on television is an escalation.