Buttigieg releases descriptions of McKinsey projects in face of criticism 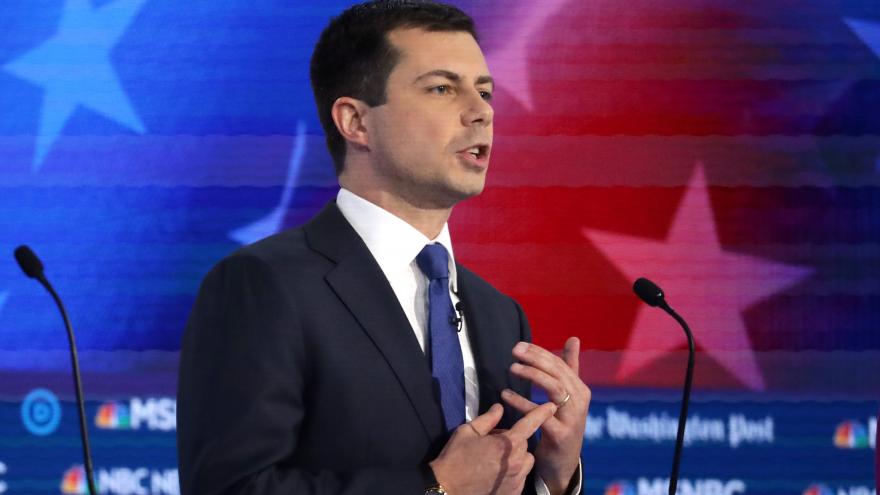 The release comes after some of Buttigieg's presidential opponents called for him to be more transparent about his time at the firm as some of McKinsey's work for the federal government, including for Immigration and Customs Enforcement on projects along the US-Mexico border, drew increased scrutiny this month.

"To the best of my recollection, these are all of my client engagements during my time with the firm, but a full release from McKinsey will allow the American public to see the full scope of my work," Buttigieg says in the statement.

The release does not include a detailed list of his clients, something that he has been called to release but rejected -- for now -- because of a nondisclosure agreement he has with his former employer. But Buttigieg, as part of the Friday release, gave the consulting firm "authorization ... to release the full list of clients I was assigned to serve."

Among his projects, Buttigieg lists a nonprofit health insurance provider in Michigan, a grocery and retail chain in Toronto, a consumer goods retail chain in Chicago, a project on energy efficiency and climate change in Connecticut and an environmental nonprofit in California.

From 2008 to 2009, he worked on a project focused on combating climate change through energy efficiency -- the only project he lists his clients on. He partnered with the Environmental Protection Agency, the Energy Department and the Natural Resources Defense Council as part of a team that ultimately published a report titled "Unlocking Energy Efficiency in the US Economy."

Per the campaign, Buttigieg served a nonprofit health insurance provider for three months, focusing on on-the-job training for savings in administration and overhead costs. In 2008, he worked in consumer goods -- focused on grocery pricing for a client in Toronto and helping a consumer goods store in Chicago investigating the market for energy-efficient home products -- before taking a leave of absence from the firm to work on a Democratic campaign for Indiana governor.

Buttigieg spent part of 2009 working out of Washington with visits to Iraq and Afghanistan on a project "focused on increasing employment and entrepreneurship in those countries' economies." He would later return to Afghanistan as part of a deployment with the Navy Reserve in 2014.

Sen. Elizabeth Warren, a Massachusetts Democrat, also took the opportunity on Thursday to call for Buttigieg to disclose his clients, telling reporters in Boston, "I think that voters want to know about possible conflicts of interests."

Buttigieg worked for the consulting firm from 2007 to 2010, shortly before he entered politics with a failed bid to be the Indiana treasurer and a successful bid to become the mayor of his hometown, South Bend, Indiana.

In his recent memoir, Buttigieg cast his time at McKinsey as a chance to get real world experience after graduating from Harvard and Oxford; the book spends the most time focused on a project to better understand grocery pricing.

"Back to the US in 2007," the mayor wrote, "I landed a job in Chicago at McKinsey & Company, and my classroom was everywhere -- a conference room, a serene corporate office, the break room of a retail store, a safe house in Iraq, or an airplane seat -- any place that could accommodate me and my laptop."

He added: "The capstone on my decade of education was in 2010, when I left McKinsey for a tough but priceless year-long political crash course in which I challenged the state treasurer of Indiana and was overwhelmingly defeated in my first experience on the ballot."

But Friday's release includes more details that had been previously unknown.

"I believe transparency is particularly important under the present circumstances in our country, which is one of the reasons why I have released all tax returns from my time in the private sector and since," Buttigieg said. "I am today reiterating my request that McKinsey release me from this agreement. ... This company must recognize the importance of transparency in the exceptional case of a former employee becoming a competitive candidate for the U.S. presidency."

Buttigieg told CNN earlier this year that he had gone to McKinsey because he "felt that I needed to get experience in business." While he had studied economics, he had not "done the work of being involved in how people and money and goods move around the world."

"I had an opportunity to work on those things at a place known for being very strong at it and for the kind of training that helps educate for that, and it felt like the missing piece of my education," he said. "I wasn't sure consulting was going to be for me for the long term. But I knew that I could grow and do that, and I do think it's, it could be distinguishing relative to people have no business experience at a time where we got to demonstrate that you can be progressive, pro-labor and reasonably knowledgeable about business too."