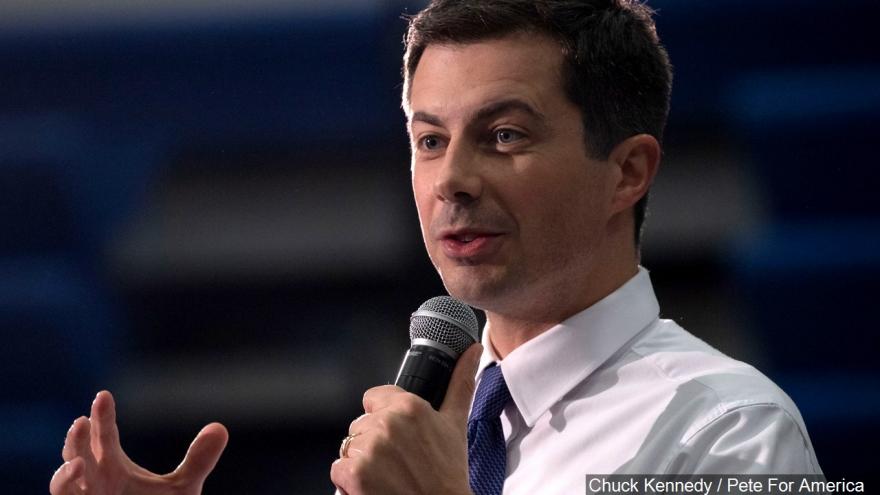 (CNN) -- Democratic presidential candidate Pete Buttigieg will begin airing four distinct ads in the early-nominating states on Tuesday, tailoring a message ranging from income inequality to his opposition to "Medicare for All" to his support from black South Bend, Indiana, residents to audiences in Iowa, New Hampshire, Nevada and South Carolina.

The four ads -- which roll out less than a month from when Iowans become the first to decide on the Democratic nominee -- signal how the former South Bend, Indiana, mayor's top aides believe different messages may work better in each early state, as opposed to one steadfast message from Buttigieg, who routinely sprinkles a host of issues into his standard stump speech.

In Iowa, a state that will be critical to Buttigieg's future in the nominating process, the former mayor will air an ad focused on economic inequality, showing him decrying that "workers have to work multiple jobs just to hold on to what they've got, while corporations making billions of dollars are paying zero in taxes."

"I am running to be a president for the guy who's up early scraping the windshield on his way to the first of his jobs," Buttigieg says in the spot, titled "Windshield."

Iowa is key for Buttigieg, whose top aides believe a strong showing in the state could propel him in later nominating states where he lacks the same presence. Polls currently find him among the top tier of candidates in Iowa.

By comparison, voters in New Hampshire will begin seeing a spot focused on Buttigieg's service in the Navy Reserve that decries partisanship and division.

"As a veteran, and as a mayor, I've seen what we can achieve when we have each other's backs," Buttigieg says in a straight-to-camera spot, titled "Only Way," that features images of his time in Afghanistan. "But in today's divided America, we're at each other's throats."

Buttigieg goes on to discuss climate change and "soaring" health care costs before saying that "to meet these challenges and to defeat this President, we need real solutions, not more polarization."

The ad is seemingly a subtle knock against New Hampshire neighbor and campaign rival Sen. Elizabeth Warren of Massachusetts. Buttigieg often uses polarization to knock Warren, who he accuses of focusing so much on fighting that "it is as though fighting were the purpose."

Voters in Nevada will also hear Buttigieg attack polarization, but this time in the context of Medicare for All, the sweeping liberal health care proposal that candidates like Buttigieg and former Vice President Joe Biden have opposed.

"We need ideas big enough to meet this moment. We ought to unify Americans around these solutions or nothing will actually get done," Buttigieg says in an ad titled "Ready." "Medicare for All Who Want It can work in a way that creates that public alternative, gets everybody covered, but unlike the Medicare for All Plan, it doesn't dictate that to the American people and risk further polarizing them."

Buttigieg has responded to Medicare for All by proposing his own plan -- so-called Medicare for All Who Want It -- a middle-of-the-road approach that would not force people into government health coverage but would offer a public option for people who chose to enroll.

He adds: "Let every American have the choice to walk away from the corporate, private plan, but when they're ready. That is the way forward."

Buttigieg has ratcheted up his attacks on Medicare for All over the last three months, making his opposition central to his pitch to voters who worry about losing their current coverage should the country adopt a Medicare for All-style health care plan.

And in South Carolina, Buttigieg will lean on his time in South Bend -- particularly his support among African Americans in the state -- to do something he has largely failed to do so far: win over African American support.

Unlike in other ads, Buttigieg's voice appears in this spot, titled "Heart," only when the candidate approves the message. At no point does the former mayor speak directly to the camera; instead, four African American supporters from South Bend testify to their experience with Buttigieg.

"I met Pete when he was running for mayor. What I saw was that he was accessible," says a voter identified as Gladys.

"He listened to our community," says Dawn, as images of Buttigieg with black voters play.

"Mayor Pete is light-years ahead of some people that have been in politics for many, many years," says Marilyn.

The tenor of the ad makes clear that Buttigieg needs to increase his support among black voters to have any chance at success in South Carolina. South Carolina is the early nominating state where the former mayor enjoys the least support, according to polls. That is especially true with black voters, who are expected to make up 60% of the electorate in the state's Democratic primary.

Buttigieg has spent nearly $10 million on television advertising across the country over the course of the campaign, according to media tracker Kantar Media/CMAG.

"From Pete's approach to health care that offers Americans real choice to his service to our country as a military veteran, the ads show how a Washington outsider like Pete can ultimately defeat Trump and lead a divided nation the day after he is no longer in office," the campaign said in its release about the ads.