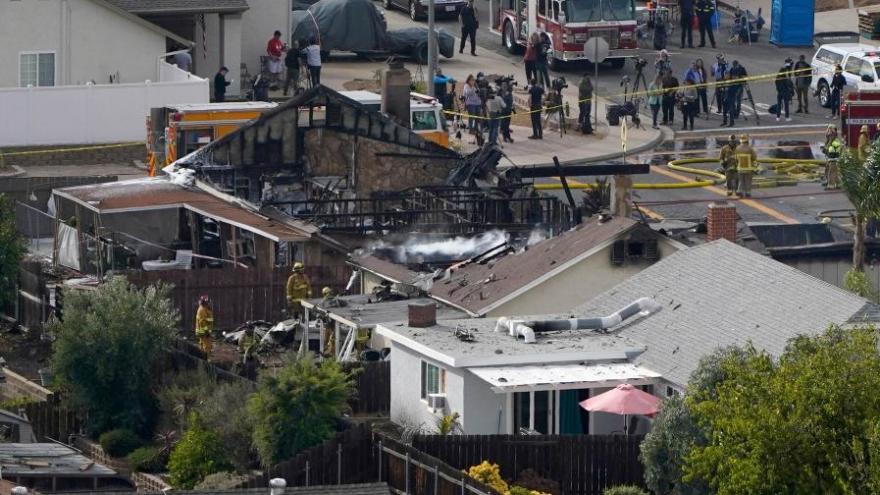 A home bought in May by California newlyweds following their wedding was destroyed in October by a plane crash.

(CNN) -- A home bought in May by California newlyweds following their wedding was destroyed in October by a plane crash.

Cody and Courtney Campbell told CNN that they finished renovating their home on Sunday. Then on Monday, a twin-engine Cessna crashed into the house in Santee, destroying the property and killing at least two people.

Fortunately, neither of the Campbells were home at the time of the crash.

A friend who lives near the Campbells saw the commotion around their street, and called the couple to see if they were home. He couldn't reach Cody, but Courtney picked up at work and confirmed they were both away from home.

"He said, "Hey, I'm riding my bike down, but I think something just happened, on your street,"' Courtney said. "I think he realized what had happened and he was dancing around the subject, not trying to be the one to tell us."

Courtney got a hold of Cody and told him they needed to leave work. A short time later, they laid eyes on what remained.

"You don't believe it. You think, it's fine. I'm sure it's not us, I'm sure it's nothing," Courtney said. "And then the reality obviously set in and I think just, shock, right? Like what just happened?"

Several vehicles were on fire when emergency crews arrived on the scene, and debris was strewn across a residential block. The Campbell's house and another home took the brunt of the plane's impact, while several more were damaged.

Courtney said she had just talked to a co-worker about finishing the home projects before she got the call.

"It was move-in ready when we bought it, but we obviously had some cosmetic things that we wanted to try to do to it," Cody said. "So since day one, we were living in it, and slowly but surely kind of making it our own home."

The Campbells say the community has rallied behind them, setting up a GoFundMe to help alleviate the cost of starting over.

"We wanted to live here. We picked this street, this community, this location for a reason," Courtney said of their neighborhood in Santee, about 20 miles east of San Diego.

Not only were the Campbells out of the house but Courtney's mother also collected their dog from the home before the crash.

Nonetheless, they did not want to forget the lives that were lost or their neighbors who were home and are still recovering in the hospital.

Speaking of the crash's two victims, Courtney said, "It's not just our story to tell. They're a part of it, forever and always for sure."

One of those who perished was 61-year-old UPS driver Steve Krueger, whom Courtney said drove the delivery route in their neighborhood for over two decades.

Krueger's brother, Jeff, told CNN affiliate KGTV that Krueger planned to retire next October. His plan was to get an SUV and travel for six months through Alaska.

UPS confirmed Krueger's death and held a moment of silence to remember him on Tuesday.

"He would want us to think about him in a positive way, and not be sad," Jeff said. "He'd be upset if he knew people would be down by this. He wants people to remember the good things about him."

The pilot of the plane, cardiologist Dr. Sugata Das, was also killed, according to CNN affiliate KFMB. He worked at the Yuma Regional Medical Center in Arizona. He was heading from Yuma, Arizona, to the Montgomery-Gibbs Executive Airport in San Diego, according to county officials and the Federal Aviation Administration.

"As an outstanding cardiologist and dedicated family man, Dr. Das leaves a lasting legacy," hospital chief medical officer Dr. Bharat Magu said in a statement. "We extend our prayers and support to his family, colleagues, and friends during this difficult time."