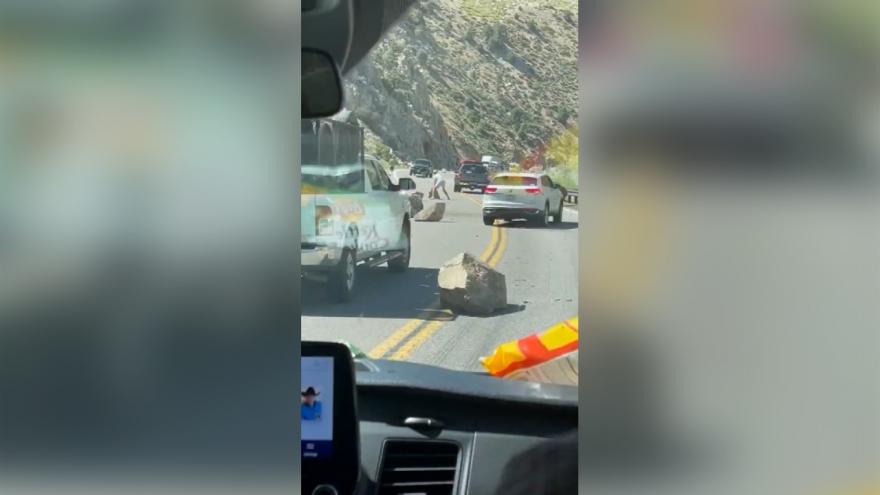 (CNN) -- Brett Durrant was traveling along Highway 395 near Coleville, California, when clouds of dust erupted across the mountainsides next to him. Parts of the rock were collapsing.

A strong earthquake jolted the eastern Sierra Nevada south of Lake Tahoe on Thursday, causing shaking to be felt throughout Northern California and Northern Nevada.

About 60 miles away in Coleville, Durrant witnessed cars weaving through large boulders scattered all over the highway. He also captured peoples'unsuccessful attempts to move them off the road.

"Dude, don't worry about that," Durrant's driver can be heard saying to a man trying to push a boulder to the side of the road.

The quake, which occurred at 3:49 p.m. PT, was reported as 6.0 magnitude by the US Geological Survey. There have been more than 30 aftershocks so far and more are predicted, according to the survey.

A rockfall is one of the most common types of movement earthquakes greater than 4.0 magnitude can cause, according to the Utah Geological Survey.

The National Weather Service in Sacramento reported feeling light shaking that lasted about a minute, shaking the building and moving the blinds. Others reported feeling the quake in San Francisco, nearly 250 miles west of the epicenter.

The California Department of Transportation detoured drivers on Highway 395 and was "responding to several reports of rock slides on U.S. 395" at the time of the earthquake, according to its Twitter account. After 5 p.m., Highway 395 was back open, the agency tweeted.

In early June, more than 600 small earthquakes were recorded over a single weekend in Southern California, near the California-Mexico border.