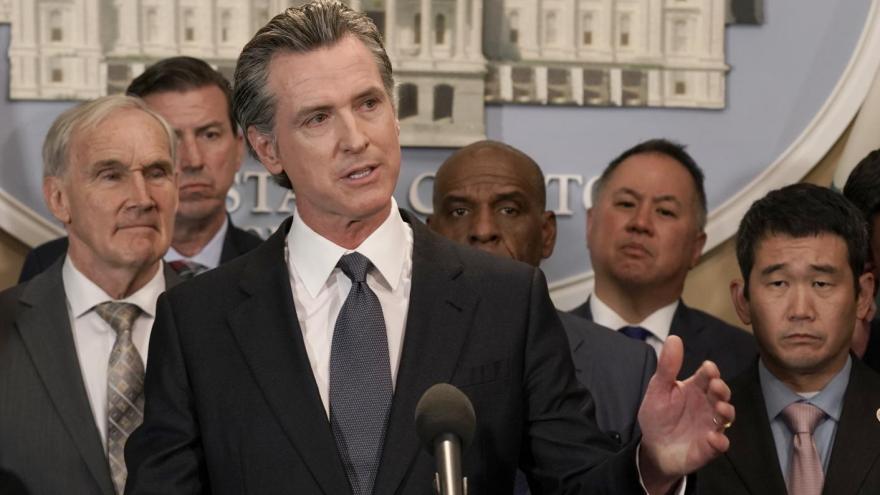 California Gov. Gavin Newsom, pictured here in Sacramento on May 25 signed a law that clears the path for gun violence victims to file civil suits against the companies that manufacture the firearms used in crimes.

(CNN) -- California Gov. Gavin Newsom signed a law Tuesday that clears the path for gun violence victims to file civil suits against the companies that manufacture the firearms used in crimes.

The move effectively tightens gun laws in California, which has the strictest gun safety measures in the nation, according to the Giffords Law Center.

"To the victims of gun violence and their families: California stands with you. The gun industry can no longer hide from the devastating harm their products cause," Newsom said in a news release.

A 2005 federal law protects gun manufacturers and dealers from lawsuits when the weapons they produce are used to commit crimes.

California Assembly Bill 1594 "utilizes an exemption to the federal statute that allows gun makers or sellers to be sued for violations of state laws concerning the sale or marketing of firearms," according to the California news release.

"Our kids, families and communities deserve streets free of gun violence and gun makers must be held accountable for their role in this crisis. Nearly every industry is held liable when people are hurt or killed by their products -- guns should be no different," the governor said.

CNN reached out to several gun manufacturers for comment on the new law.

High-profile shootings -- including a racist mass shooting at a Buffalo, New York, supermarket that targeted the Black community and the massacre at a Uvalde, Texas, elementary school that took the lives of 19 students and their two teachers -- have reignited national conversations on gun laws.

Last month, President Joe Biden signed into law a measure that was the most significant federal legislation to address gun violence since the 10-year assault weapons ban of 1994, which expired in 2005. But the law fell short of banning any weapons.

In California, Assemblymember Phil Ting, who co-authored the bill, said hitting the bottom line of gun manufacturers "may finally compel them to step up to reduce gun violence by preventing illegal sales and theft."

"Gun violence is now the leading cause of death among kids and teens in the United States, surpassing car accidents. I see no better argument for stronger gun safety legislation," Ting said. "For far too long, the firearms industry has enjoyed federal immunity from civil lawsuits, providing them no incentive for them to follow our laws."