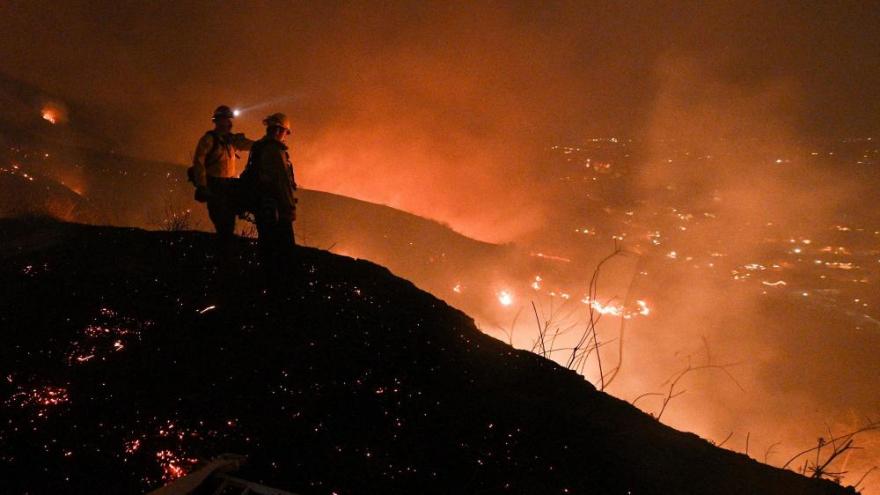 (CNN) -- More than 100,000 people are under mandatory evacuation orders from the wildfires in Southern California, where two fires are burning out of control.

As Ed Pascasio fled from the Silverado Fire on Monday afternoon with his wife, niece and sister-in-law, he watched embers flying toward their neighborhood.

"The sky was orange, kind of like doomsday," he said. "I've never seen it change dramatically that fast."

"A lot of neighbors were leaving at the same time. Everyone was shocked by the speed of it all," he said.

This has been a devastating year for fires. At least 8,000 fire incidents reported by Cal Fire have burned a record 4 million acres and claimed the lives of 31 people this year so far. And dry, windy conditions have prompted power shutoffs to prevent more.

Southern California Edison said a power line may have played a role in igniting the Silverado Fire, which has burned 7,200 acres near Irvine, according to a report filed with California Public Utilities Commission.

The initial safety incident report describes overhead electrical facilities in the area where authorities think the fire started but notes no activity on the circuit.

"...(It) appears that a lashing wire attached to a telecommunications line may have contacted SCE's power line above it, possibly starting the fire," SCE spokesman Chris Abel told CNN.

Nearly 175,000 customers in California were without power Tuesday afternoon, according to PowerOutage.US.

Fire officials said 700 people are battling the two fires, and on Monday two of them were critically injured.

Fennessy visited the injured firefighters in the emergency room, but was unable to talk with the firefighters, as each is intubated.

"Our firefighters are some of the bravest in the world. This is a very hazardous job," Fennessy said.

The men, ages 26 and 31, are part of Orange County Fire Authority's ground crew. Their names haven't been released. The team uses hand tools to stop wildfire flames from progressing, much like hotshots.