California's Apple Fire has grown to more than 20,000 acres and is 5% contained 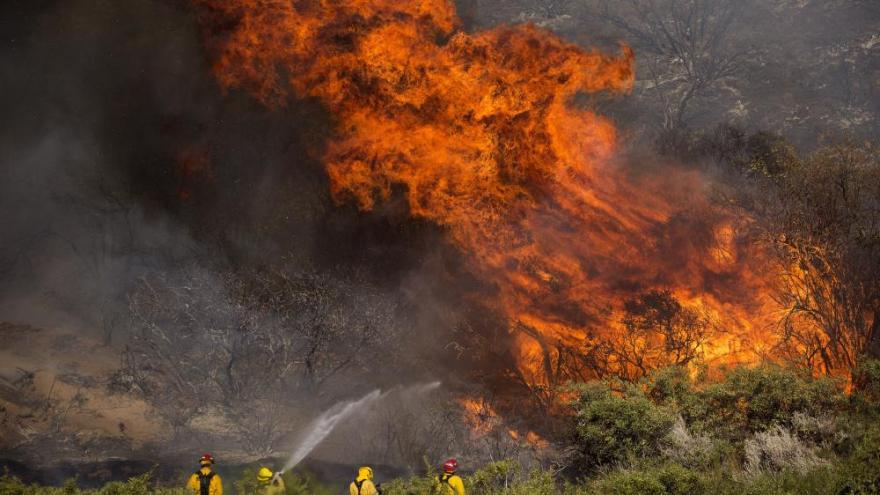 Firefighters work against the Apple Fire near Banning, California.

(CNN) -- The Apple Fire burning in parts of Riverside and San Bernardino counties has grown to at least 20,516 acres and is 5% contained, the California Interagency Incident Management Team said.

There are several factors coming together to create major hurdles for firefighters who are battling the blaze. Terrain is the biggest, said Lisa Cox, the fire information officer for the San Bernardino National Forest.

"We've got extremely steep, rugged terrain," Cox said. "We have many different drainages that are all kind of intersecting together and that creates these funneling effects of different wind patterns and creates more erratic fire behavior."

"And with that, we have very thick brush including this really flammable ecosystem called chaparral that likes to burn and it hasn't burned here in a long time," Cox added.

The fire, fueled by high temperatures and gusty winds, is also creating its own weather system, Cox said.

"It actually creates this updraft of smoke ash and flame and it creates this huge cloud and it has a down draft that actually spreads out in all 360 directions around the fire," Cox said.

More than 2,000 are battling the fire

The Apple Fire was first reported on Friday in the Banning Canyon area and forced more than 7,000 people to evacuate. The cause of the blaze remains under investigation.

In a Sunday evening update, officials said there were 2,266 personnel, 29 hand-crews, 9 helicopters, 260 engines and 11 water tenders fighting the fire.

Evacuation orders were issued for residents living north of Banning and Beaumont in Riverside County. Some people living in the Oak Glen community in San Barnardino County have also been evacuated.

All evacuation centers will enforce Covid-19 protocols such as temperature screenings upon entry, masks and social distancing, Roseen said.